GENEVA — Spurred by the latest fighting in Gaza, the United Nations’ top human rights body voted Thursday to appoint a commission of inquiry with unusually broad latitude to investigate possible war crimes and other abuses committed in Israel and the occupied Palestinian territories. Israel denounced the decision as a one-sided sham.

It was the third time in seven years that the Human Rights Council in Geneva had decided to name such a panel, but this one differed in two important respects:

It is “ongoing,” meaning the panel can pursue the inquiry indefinitely. That gives it a degree of permanence akin to investigative bodies documenting atrocities in Syria and Myanmar.

And the commission is not limited to looking just at hostilities in Gaza and the West Bank, but instead has been charged with examining “all underlying root causes of recurrent tensions, instability and protraction of conflict, including systematic discrimination and repression based on national, ethnic, racial or religious identity.”

Although the commission could theoretically investigate human rights violations by all parties, the resolution creating it does not mention Hamas or other Palestinian militant groups. Critics who opposed the resolution said it lacked balance.

The 47 members of the council voted to approve by 24 to nine, with 14 abstentions.

Pakistan’s U.N. ambassador, Khalil Hashmi, who proposed the panel on behalf of the Organization of Islamic States, said it was needed to hold Israel accountable for what he called decades of human rights violations in the Israeli-occupied Palestinian territories.

Israel swiftly denounced what Prime Minister Benjamin Netanyahu called a “shameful decision” and criticized it for not acting against Hamas, the Palestinian militant group that fired rockets into Israel during the 11 days of fighting that was halted a week ago.

“Once again,” he said, “an immoral automatic majority at the council whitewashes a genocidal terrorist organization that deliberately targets Israeli civilians while turning Gaza’s civilians into human shields.”

Addressing the council Thursday, the U.N. human rights chief, Michelle Bachelet, did in fact lay blame on Hamas, accusing it of “a clear violation of international humanitarian law” for indiscriminately firing rockets at Israeli civilian areas and for locating military assets in civilian areas in Gaza.

But Israel’s intense bombardment of densely populated areas might also constitute a war crime, Ms. Bachelet said. “Despite Israel’s claims that many of these buildings were hosting armed groups or being used for military purposes,” she said, “we have not seen evidence in this regard.”

The decision to create the panel won support from a range of states like China, Russia and Venezuela, ranked among the world’s worst human rights abusers, which ordinarily oppose resolutions singling out specific countries for human rights abuses.

But European states, which have backed the creation of a dozen commissions of inquiry in the last five years, wavered over this one. In the end, they voted against it or abstained.

Britain’s ambassador, Simon Manley, said the commission had been given an “overly expansive mandate” and that it risked hardening positions between the antagonists. 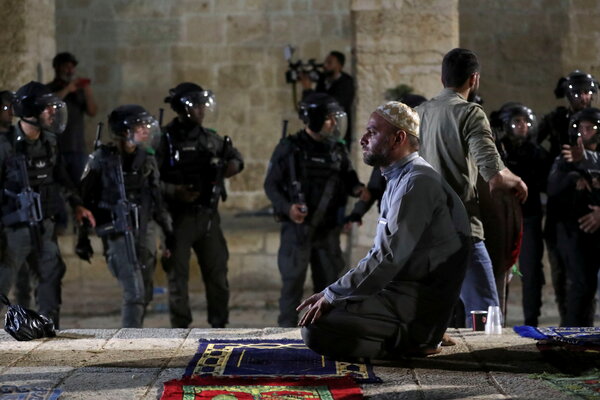 The United States is not a member of the rights council and U.S. officials opted not to speak during the council debate. But after the vote, the United States condemned the decision, calling it “a distraction” that contributes nothing to humanitarian and diplomatic efforts and instead “threatens to imperil the progress that has been made in recent weeks.

Ms. Bachelet squarely linked the latest eruption in the conflict to the recent threat of evictions of Palestinians from their homes in Jerusalem and Israeli police actions at the holy city’s Aqsa mosque, the third-most sacred site in the Islamic faith. She also denounced what she called the excessive use of force in the West Bank.

Since May 10, 27 Palestinians have been killed and 6,800 injured by Israeli forces in the West Bank, Michael Lynk, the United Nations rights expert monitoring the occupied Palestinian territories, told the council. “Accountability must rise to the top of the international agenda and of this council,” he said, also urging an investigation by the International Criminal Court.

Meirav Eilon Shahar, Israel’s ambassador to the United Nations in Geneva, dismissed any comparison between the actions of Hamas and those of Israel as a false equivalence.

Ms. Eilon Shahar cited the statement of a senior Hamas leader three days before the start of hostilities urging followers “to cut off the heads of Jews with knives.” And she said Hamas had fired 4,400 rockets from Palestinian homes, hospitals and schools, indiscriminately targeting Israeli civilians.

“Each one of these rockets constitutes a war crime,” she said.

The council’s decision on Thursday directs the commission to document and preserve evidence so that it can be used in legal proceedings, to identify individual responsibility — including command responsibility — and to say how they could be held accountable.

“What we can say, sadly, is we will be here again until the Human Rights Council addresses the root causes,” said John Fisher, Geneva director of Human Rights Watch, which just a month ago published a report asserting that Israel’s policies toward Palestinians constitute a form of apartheid.

“There is a need for a standing commission of inquiry that can really come to grips with the root causes of oppression, of persecution and of apartheid,” Mr. Fisher said.

Israel refused to cooperate with previous investigations into events in Gaza and the occupied Palestine territories, and there is little to suggest it will take a different approach.

Still, the commission’s open-ended mandate and the broad scope of the investigation may add pressure on Israel at a time when Palestinian rights appear to be attracting broader sympathy, including in the United States, Israel’s staunchest ally.