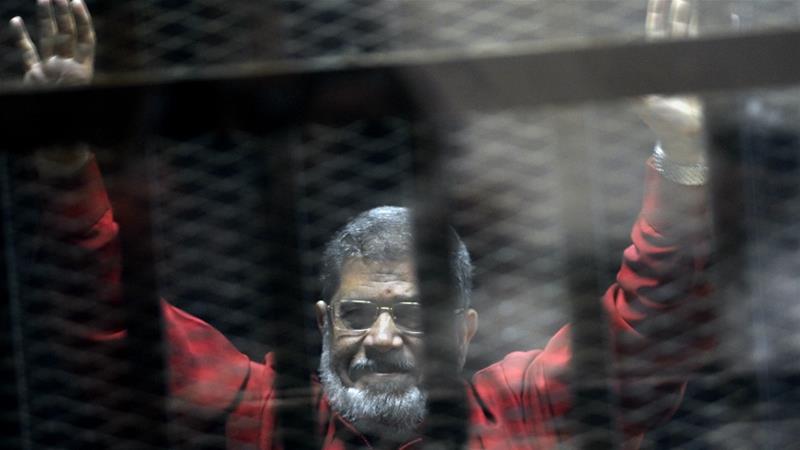 An independent panel of United Nations experts has said the death of former Egyptian president Mohammed Morsi in June could amount to “a state-sanctioned arbitrary killing”.

“Morsi was held in conditions that can only be described as brutal, particularly during his five-year detention in the Tora prison complex,” a statement from the office of the UN high commissioner for human rights said.

His death “after enduring those conditions could amount to a state-sanctioned arbitrary killing”, the statement added.

Morsi, Egypt’s first democratically elected president, died on June 17 while standing trial for charges that he and legal observers said were politically motivated.

He was deposed in a 2013 military coup carried out by current President Abdel-Fattah el-Sisi following a year in power.

Morsi, who belonged to the now-outlawed Muslim Brotherhood, was overthrown after a tumultuous year in power.

Led by special rapporteur Agnes Callamard and the UN Working Group on Arbitrary Detention, the human rights experts explicitly called out Sisi’s government for rights violations in jails describing them as “intentional”.

Morsi spent nearly six years in solitary confinement where the panel said he “was denied life-saving and ongoing care for his diabetes and high blood pressure”.

The experts noted Friday that “authorities were warned repeatedly” about his deteriorating health to the “point of killing him”.

“There is no evidence they (authorities) acted to address these concerns, even though the consequences were foreseeable,” the statement added.

Egyptian authorities have not yet commented on the panel’s findings.

Since ascending to the presidency in 2014, Sisi’s government has waged a wide-scale crackdown jailing thousands of Islamists, secular activists, as well as bloggers and comedians.

The independent panel of UN experts also warned that thousands of prisoners are faced with severe health risks due to medical negligence in jail.

Among the other detainees enduring similar conditions include Morsi’s former foreign affairs adviser, Essam el-Haddad, and his son Gehad el-Haddad, who was chief spokesman for the Muslim Brotherhood at the time of his arrest, the experts said.

“These two men are effectively being killed by the conditions under which they are held and the denial of medical treatment,” the statement said.

According to Callamard and her working group, the experts suggest the imprisonment of the Haddads is “intentional” or was at the very least “allowed to happen through the reckless disregard for their life and fate”.

“Thousands of other prisoners in Egypt may also be at risk of death or irreparable damage to their health because of inadequate conditions of detention, compounded by rampant violations of due process,” the experts warned.

“We have received reports of overcrowding, inadequate food, poor ventilation and no access to sunlight. Prisoners are denied family visits and fail to receive necessary medical care,” the statement said.

Calling Morsi’s death “unlawful”, the panel recommended publishing an impartial investigation of all prisoners who have died in state custody since 2012.

“This investigation is a significant step forward in holding such regimes accountable for their actions,” he said.