CENTCOM calls reports suggesting that Washington is getting out the two bases ‘false and without merit’. 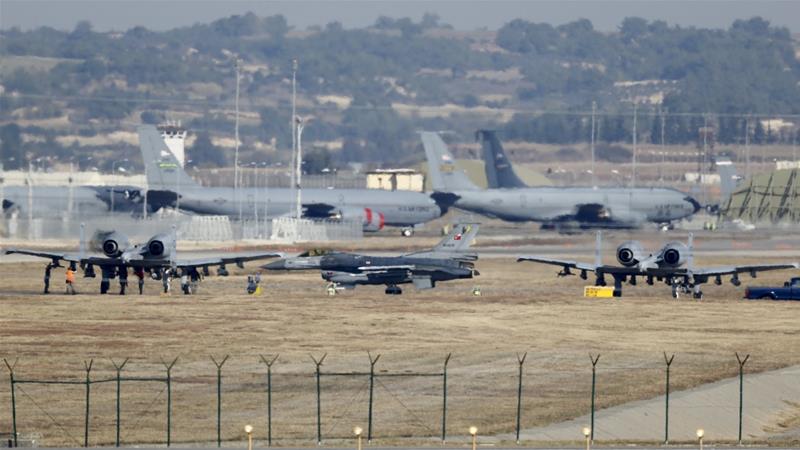 The United States Central Command (CENTCOM) has denied reports that its forces were leaving the Incirlik base in Turkey and the Al Udeid base in Qatar.

In a statement on its Twitter page on Sunday, CENTCOM said: “The US is not leaving Incirlik Air Base in Turkey, nor is the US leaving Al Udeid AB, Qatar. These reports are false and without merit.”

The US Air Forces Central Command (AFCENT) also tweeted that such reports had “zero credibility”.

“These unhelpful reports feed mistrust and division among regional partners at a time when we need to work together to address shared security concerns,” it said.

The US is not leaving Incirlik Air Base in Turkey, nor is the US leaving Al Udeid AB, Qatar. These reports are false and without merit.

A report by an Israeli website suggested on March 22 that the US was in the process of leaving both bases.

US authorities have said at various times that multiple recent tensions between Washington and Ankara do not affect the US army’s operations in Turkey.

Earlier in March, Johnny Michael, the spokesperson for the US European Command (EUCOM), denied “speculative” reports that the US military reduced its operations at Incirlik base, adding that all military activities continued normally.

A day before Michael’s remarks, a Wall Street Journal report suggested that the US “sharply reduced” combat operations at the airbase and was considering permanent cutbacks there.

Relations between Ankara and Washington have been tense due to the US support for Kurdish People’s Protection Units (YPG) fighters in northern Syria and Turkey’s recent military operation against the same fighters in the northwestern Syrian region of Afrin.

US military base in Qatar

Last December, the former commander of the US Fifth Fleet John W Miller said that the US needs the Al Udeid airbase in order to combat terrorism in the region, and that leaving it would be “viewed by political adversaries as a victory”.

“Walking away from Al Udeid airbase, rather than continuing to work with Qatar to align policies would set a terrible example throughout the region, would make combat, logistic and intelligence gathering operations more challenging,” Miller said.

In February, the Defense One website quoted a US spokesperson for Al Udeid who said that the airbase will undergo projects regarding infrastructure development throughout the military establishment.

There are currently more than 9,000 US soldiers, most of them from the Air Force, and 100 military aircrafts on Al Udeid, which lies about 30km west of Doha.

It is is the main air operations centre for the US Central Command, with cargo aircrafts, strategic bombers, and aircraft refuelers.