John Bolton’s warning comes during his four-day trip to Israel and Turkey to discuss US troop pullout from Syria. 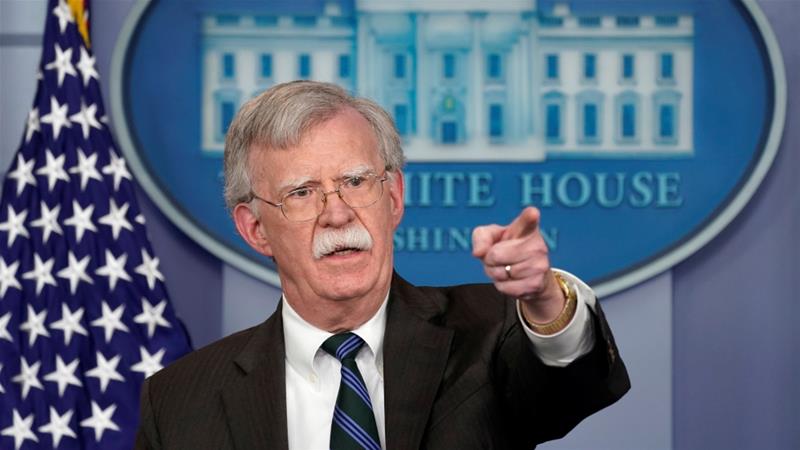 US National Security Adviser John Bolton has warned the Syrian government that it should not see the impending US military withdrawal from the country as an invitation to use chemical weapons.

The move, announced before Christmas, was initially expected to be completed within weeks, but the timetable has slowed as US President Donald Trump acceded to requests from aides, allies and members of Congress for a more orderly withdrawal.

“We’ve tried twice through the use of military force to demonstrate to the Assad regime that the use of chemical weapons is not acceptable,” Bolton said.

“And if they don’t heed the lessons of those two strikes, the next one will be more telling.”

Trump has twice bombed Syria over the government’s alleged use of chemical weapons in April 2017 and the same month last year.

In September, a senior US official said there was evidence showing chemical weapons were prepared by Syrian government forces in Idlib, the last major rebel stronghold in the country.

Bolton said he was not suggesting Syria appeared ready to use chemical weapons.

Israeli officials have argued that a swift withdrawal of the roughly 2,000 US troops could enable Iran to expand its influence and presence in Syria, wracked by a years-long civil war.

“There is a great concern among US allies in the region about what is the next step,” said Yossi Mekelberg, professor of international relations at Regent’s University London.

Israel was particularly concerned since Iran is believed to supply Lebanon’s Hezbollah with weapons through Syria, Mekelberg said, noting that the Israeli military launched a military operation in December to destroy what it said were cross-border tunnels dug by the Shia group to send fighters to attack Israel.

Meanwhile, Trump’s move has also raised fears about clearing the way for a Turkish assault on Kurdish fighters in Syria, who have fought alongside American troops against the Islamic State of Iraq and the Levant (ISIL, also known as ISIS).

Turkey considers the Kurdish People’s Protection Units (YPG) a “terrorist group” linked to the outlawed Kurdistan Workers’ Party (PKK) within its own borders.

“Top on Turkey’s list is the disarmament of the Kurdish YPG fighters,” said Al Jazeera’s Mohammed Adow, reporting from Gaziantep on Turkey’s border with Syria.

“Turkey wants them disarmed and removed from the areas near its border with Syria. Turkey also wants logistical and air support from the US, once the troop withdrawal is complete. Turkish officials will want John Bolton to come up with a clear timetable for withdrawal.”

Trump’s announcement about the intended troop withdrawal was greeted by surprise and condemnation from many US legislators and allies, and prompted the resignation of Defense Secretary Jim Mattis and the US special envoy for the anti-ISIL coalition in protest.

Secretary of State Mike Pompeo is following Bolton to the Middle East this coming week for an eight-country tour of Arab allies to shore up support for the administration’s partners in the region.