Retired footballers to play two exhibition matches with other former players in a cricket-mad country later this year. 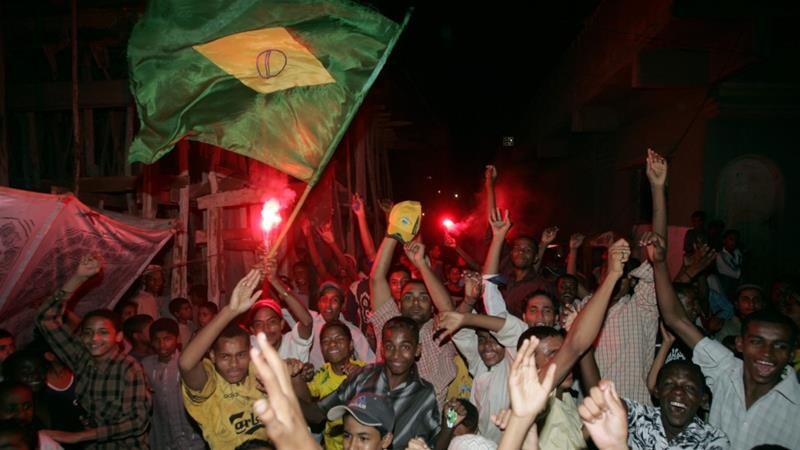 Former international footballers Luis Figo and Kaka made a guest appearance in Pakistan earlier this month, launching a set of exhibition matches scheduled to take place in Karachi and Lahore in April.

Football is not the most popular sport in Pakistan, a country of 220 million people that sits at 199th on the FIFA rankings. Even the national sport, hockey, is dwarfed in popularity by cricket, a fact acknowledged by Kaka at the event’s launch this month.

“We know football is not the most popular sport here. It’s cricket, right?” said Kaka. “But I think the door is opening … to give these youngsters another opportunity, not just for cricket but also for football.”

But with football’s popularity growing among the younger generation, organisers of the World Soccer Stars event, TouchSky Group (TSG), are hoping to use that little opening by organising exhibition matches to give the sport a launching pad.

“Pakistan is a nation starved of football action and that’s a sport which has a massive following in the country,” Ahmer Kunwar, TSG’s CEO, told Al Jazeera.

“The boost will not happen overnight. I expect a gradual transition by converting fans, brands and audience to football as the next big alternative sport in the market.”

Pakistan’s football administration, however, is currently embroiled in an internal crisis.

The federation’s president, Faisal Saleh Hayat, was recently removed through elections ordered by the Supreme Court.

FIFA, however, backs Hayat as the legitimate head of the federation and labelled the court’s orders as a third-party interference, threatening to suspend the federation.

While Kunwar said his organisation was working “hand in glove with the federation”, experts believe staging exhibition matches will do little to improve the state of football at the grass-root level.

“Such events bring the famous names for generating a bit of hype and attract some kind of investment, but not necessarily for local football,” said Ali Ahsan, a director at FootballPakistan.com.

“They are not enough to make a sustainable and credible change in domestic football. If it was a presentable product in countries like Pakistan, you’d expect investors to get more involved in the local game instead of piggybacking on such stop-gap events,” he added.

“Domestic football won’t change just by bringing retired legends for some event for a few days.”

In 2017, a similar event saw star footballers Ryan Giggs, Ronaldinho and Nicolas Anelka among others take part in exhibition matches in Pakistan.

According to a report in Dawn.com, organisers of that event, Leisure Leagues, said they were not linked with World Soccer Stars since “they have understood that exhibition matches do little for football promotion in the country”.

While Kunwar said the event will “help fans realise that world stars are here to support football grow”, the matches will not act as a “game-changer” for Pakistan football, according to Rishad Mahmood, sports editor of Dawn newspaper.

“Pakistan football needs full-time sponsors,” said Mahmood. “It could be well served with such funds being used at grassroots level and in raising the standard of the country’s premier league.

Ahsan echoed the sentiment, adding that the funds could have been better utilised.

“Our rough guess is the cost of bringing these superstars for such an event is probably worth an entire year’s budget of the Pakistan Football Federation and nearly three to five years’ worth of money the PFF would normally allocate to youth development and the domestic game combined,” said Ahsan.

Figo, the former Portugal captain, who walked into the event holding a cricket bat, termed the event as an “opportunity to open some football schools” in Pakistan.

TSG’s Kunwar said work was being done with local brands “to help reach out to areas never considered before to help upskill at basic level giving them a chance to get spotted by stars who will analyse their abilities”.

Pakistan’s football following is all the more visible during the World Cup when certain areas of the country – Lyari in the southern city of Karachi, for example – turn into “Mini Brazil”, with flags, posters and giant screens put up by football-crazed fans.

Despite question marks over the effect the retired footballers will have, Kaka and Figo’s arrival in the country was welcomed by excited fans who rarely witness international sports stars perform in Pakistan.

Until recently, Pakistan was starved of even the international cricket action following a gun attack on the Sri Lankan team in 2009.

Football fans have been consigned to watching foreign stars on TV. While the domestic football league is not broadcast on local sports channels, Ahsan says even the matches involving the national side rarely make it on air.

“While these events are good for positive PR, it would be a mistake to regard them as a means of uplifting domestic football in Pakistan because that requires a long-term plan and vision from the grassroots upwards with the requisite patience and persistence to see it become a viable product that can be marketed and sold to attract investors,” said Ahsan.