JERUSALEM — Last year, when the Trump administration was still trying to entice the Palestinians into peace talks with Israel through cooperation rather than coercion, it encouraged the two sides to team up on small-scale infrastructure projects as a way to rebuild trust while improving conditions in the here-and-now.

Deep in the Negev Desert, a group of Israeli and Palestinian civilians did just that. They hammered out creative ways to bring solar power, sewage treatment and clean water to the impoverished Gaza Strip, where the lights are out more than they are on, the aquifers are befouled, and raw sewage has been pouring into the Mediterranean — sometimes overwhelming a nearby Israeli desalination plant with pollution.

Their plans were aimed at creating jobs, improving public health and, above all, sustaining hope in a place where that is in short supply. But in the time it took them to see to the nuts and bolts — business plans, site selection, Israeli military approvals, and the hiring of engineers and workers in Gaza — the political context changed radically.

A series of punitive American diplomatic moves followed, including cuts of hundreds of millions of dollars in aid. Among the casualties: $10 million in start-up grants that the Israeli-Palestinian partnership had been counting on for its package of small-bore Gaza initiatives.

Clashes between Israel and Gaza, in months of protests and in repeated rounds of rocket attacks and airstrikes like the ones earlier this week, only added to the obstacles.

Now, an on-again, off-again cease-fire is once more being embraced by both Israel and Hamas, the militant group that controls Gaza. And the people behind the small-scale energy and environmental initiatives are trying to find an alternative source of seed capital and hoping that the latest brush with war this week will persuade nations that could supply the money to act quickly. 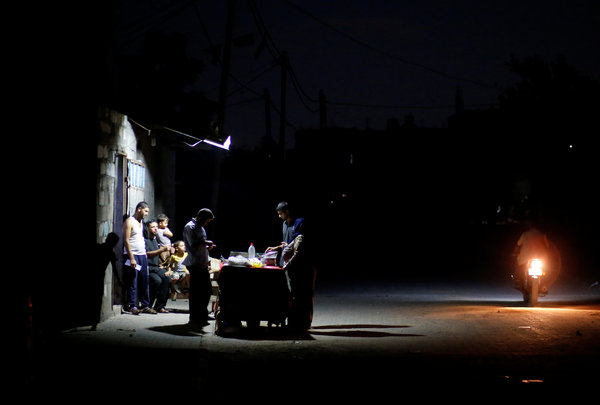 “We are ready, and our proposals are ready. What is needed is donations,” said Ashraf al-Ajrami, a former Palestinian minister of prisoner affairs who is a key partner in the Gaza projects.

In a sense, the timing couldn’t be worse.

The violence that began with a botched intelligence operation and gunfight in Khan Younis and wound up with hundreds of rockets raining down on Israeli cities led on Wednesday to the resignation of Defense Minister Avigdor Lieberman, whose aides had indicated their willingness to let the Gaza projects proceed. And early elections in Israel, in which Prime Minister Benjamin Netanyahu’s handling of Gaza is expected to be a central issue, would put any progress on hold.

Still, the diplomats, academics and eco-entrepreneurs who met this week at the Arava Institute for Environmental Studies, based at the tiny kibbutz Ketura in the Negev desert, said they wanted their projects to be shovel-ready whenever the time is ripe.

To be sure, proposals for Gaza infrastructure projects are commonplace: In February, Israel called on international donors to fund a billion-dollar rebuilding plan, including big-ticket items like two desalination plants, a natural gas pipeline and a new electrical transmission line into Gaza from Israel.

But major projects can take years to complete, leaving Gaza’s ills to fester.

What sets the Arava group’s projects apart, officials say, is that they could get underway immediately, with projects up and running in a few months and with most financed in large part by private investment.

Another risk of ambitious infrastructure projects is that, once completed, they become tempting targets for Israeli airstrikes in wartime. So the Arava group’s strategy is to stay small and spread out.

One of the projects would put 40-kilowatt solar panel arrays on the roofs of 100 Gaza schools and hospitals. That would provide them with much-needed electricity while diverting a fraction of the power to run water-generation kiosks that suck the humidity out of the coastal air and turn it into marketable drinking water. Local franchisees would sell it for a third of the price of bottled water.

Another would build a small, solar-powered sewage-treatment plant for about 5,000 homes near the southern Gaza city of Khan Younis, selling the treated but unpotable end product to nearby farmers, whose groundwater has become too salty to irrigate their crops.

Other projects envision installing solar panels atop the homes of poverty-stricken families or larger solar panel fields to power sewage-treatment plants so they are not dependent on Gaza’s unreliable electrical grid.

If successful, these could be replicated widely enough to benefit many of Gaza’s approximately two million residents, backers said. Crucially, the projects rely on municipal-level approvals, not the involvement of Hamas or its ministries, they said.

Dennis Ross, the veteran United States negotiator who is advising the Arava partners, said they were benefiting from his own self-critique after repeated failures at peacemaking. His strategy had always been to try to reach a comprehensive Israeli-Palestinian agreement on all issues, he said. But energy and water problems, which cross borders, need to be solved more immediately.

“One of the lessons I learned was that we never focused enough on the ground up,” Mr. Ross said. “Any approach to peace that’s trying to create a horizon has no credibility if the day-to-day realities continue to deteriorate. We didn’t do enough from the ground up, and people-to-people, to show there’s a model of success when you work together.”

Like Mr. Ross, the Arava partners are all supporters of a two-state solution to the Israeli-Palestinian conflict, which itself looks increasingly like a lost cause.

David Lehrer, the institute’s director, said that after decades merely advocating cross-border environmental cooperation in Israel, the West Bank and Jordan — “Nature knows no borders,” he said — Arava saw little progress. So it decided a few years ago to bring together people who “have to deal with these problems day to day,” he said.

One is Tahani Abu Daqqa, another former Palestinian Authority minister who, like Mr. Ajrami, grew up in Gaza and spent years in an Israeli prison. There, she said, she forged cordial relationships with Palestinians on all sides of the conflict.

She said they have assured her they would not stand in the way of her plans.

“They trust me,” she said. “And when we show Gaza people that we’re working with Israeli people who want peace like us, it will show that we can live together and be good neighbors. It’s a foothold for peace building.”