FAYSH KHABUR BORDER CROSSING, Iraq — The nine young mothers rushed into the spartan offices of a Syrian border post, looking for the sons and daughters taken from them two years ago, children they thought they would never see again.

The bewildered children, dressed in new puffy jackets from the orphanage they had come from, were mostly too young to remember their mothers. They started to cry as the sobbing women grabbed and kissed them and then led them away from the orphanage workers who were the only caregivers they knew.

“I was so happy, but it was a shock for both of us,” said one mother, who said she had been dreaming of seeing her daughter again for nearly two years. “She is not used to me yet.”

The girl was now 2 and a half.

The secret handoff on the Syrian-Iraqi border last week was so far the only reunion of Yazidi women from Iraq and the children they had while sexually enslaved by their Islamic State captors.

The plight of these women, who survived almost unimaginable horrors in five years of captivity, is one of the many tragic but least-known footnotes in the story of the Islamic State’s conquest of large swaths of Iraq and Syria in 2014.

For them, the story is far from over, their path forward still uncertain.

To the traumatized Yazidi community, a small religious minority in northern Iraq, the children are a direct link to the ISIS fighters who slaughtered thousands of Yazidis and captured 6,000 more. Yazidi elders have said they would not accept the children back into the community, and one said that the children risked being killed if their mothers brought them home.

When the young women were freed with the fall of the last piece of ISIS territory in Syria two years ago, they faced a wrenching choice: If they wanted to return to their families in Iraq, they had to leave their babies behind. Many were told, incorrectly, that they would be able to visit their children.

Now they have been forced to choose again. The women who crossed into Syria last week had to cut ties with their parents, siblings and the villages they called home if they wanted to rejoin their children.

“Nobody can really understand what a huge step these women have taken, what risks they are taking, how incredibly brave they are,” said Dr. Nemam Ghafouri, an Iraqi-Swedish physician who was instrumental in the transfer.

About 30 more children, whose mothers were either too afraid to ask for them back or decided not to keep them, remain in the orphanage in northeastern Syria.

It was an agonizing choice for the women, many of whom were themselves children when they were kidnapped by ISIS fighters. None of the women could tell their families that they were leaving, and might not see them again, for fear of jeopardizing the operation.

“I’ve been crying for three days,” said one of the women who, to rejoin her 5-year-old daughter, left her elderly mother behind. “I feel like this would kill my mother. She is a mother. She would die for me just like I would die for my daughter. This is a very difficult situation for me.”

She broke down in tears.

For now, the nine women and 12 children are hiding in a safe house at an undisclosed location in Iraq. Promised refuge in a Western country by the reunion organizers, they are desperately hoping that other countries will take them in. About 20 more mothers with children in the Syrian orphanage are watching to see how they fare.

The New York Times agreed to delay publication of the exchange until the women and their children were safe, and is not identifying them for their protection. 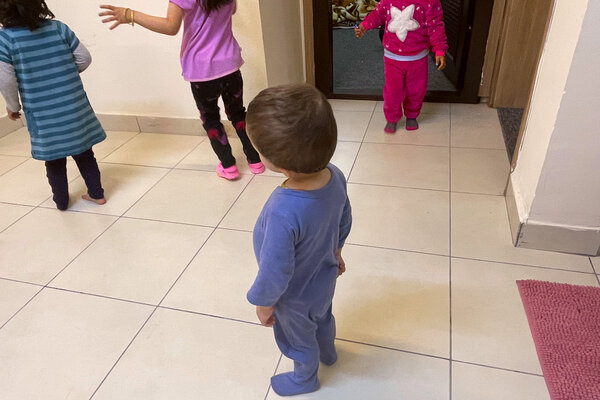 A former U.S. diplomat, Peter W. Galbraith, engineered the reunion across borders and political party lines, coaxing help from previously indifferent governments. Mr. Galbraith, who has close ties to Kurdish authorities in Iraq and Syria, said he had spent more than a year trying to get approval to allow some of the women to reclaim their children and bring them into Iraq, a mission delayed by the pandemic.

The orphanage is in an area of northeastern Syria that is controlled by American-backed Kurdish-led authorities and is semiautonomous. Sinjar Province, where the Yazidis are from, lies across the border in Iraq.

Mr. Galbraith said an unnamed White House official had helped clear the final obstacles with a call to a Kurdish-Syrian general who is a U.S. ally. The National Security Council did not respond to a request for comment.

For the women, the nightmare began when the forces of the Islamic State swept across northern Iraq in 2014, declaring the territory an Islamic caliphate. The terrorist group considers Yazidis pagans. When the ISIS fighters got to the Yazidi homeland that August, they separated the men and older boys and massacred up to 10,000 of them in what the United Nations and the Congress have declared a genocide.

About 6,000 women and children were captured, and many were sold to ISIS fighters. They were treated as disposable property, repeatedly raped, traded and sold at will. About 3,000 Yazidis are still missing.

When ISIS was driven from southeastern Syria in early 2019, most of the Yazidi women were freed and taken with their children to halfway houses. They were told by Yazidi elders that they could go home but that they had to leave their children behind. Many of the children were taken to the Kurdish-run orphanage.

Some women who were not identified as Yazidi, including some who hid their ethnicity in order to keep their children, were taken to Al Hol, a squalid detention camp in northeastern Syria. Despite the camp’s conditions, the woman with the 2-and-a-half-year-old pretended to be Arab so that she could stay there and keep her child.

During the final days of the caliphate, when American-led airstrikes were pounding Baghuz, Syria, and she was wounded by shrapnel, she fought to keep her infant daughter alive. She fed her flour mixed with water to keep her from starving. She sewed baby clothes from cloth cut from her own dresses.

She was determined to keep the child she had fought so hard to keep safe.

But after six months, she was forced to admit that she was a Yazidi. She was then taken to the halfway house, but refused to leave without her daughter.

Her family begged her to return.

“My family called and said, ‘Just come back, and you can go back and see her,’” the woman said.

After three months, she agreed and returned to Sinjar. But like the other women, she was never allowed to see her child again.

The women were not allowed to talk to their children by phone. The orphanage staff had been texting the women photos and videos of the children, but stopped last year after Yazidi elders asked them to.

When the photos stopped, the women worried that something terrible had happened to the children. Some said they wanted to kill themselves.

“I am her mother. I have to take care of her,” said the woman with the 2-and-a-half-year-old. The girl’s father and his relatives were killed in Syria, she said. “All she has is me. Who cares about the father?”

Yazidi elders and religious leaders cared about the fathers.

Bringing the children of ISIS terrorists to Sinjar “would destroy the Yazidi community,” Baba Sheikh Ali Elyas, the top Yazidi religious authority, told The Times in an interview this week. “It is very painful for us. The fathers of these children killed the parents of these survivors. How can we accept them?”

In addition, Iraqi law specifies that the child of a Muslim father is Muslim, so the children could not be considered Yazidi. The Yazidi faith is a closed religion that does not allow converts, even if Iraqi law allowed conversions from Islam.

Angered over what he sees as an international focus on a few Yazidi women when thousands of Yazidis were still missing and more than 140,000 are languishing in displacement camps, he said: “Yazidis are all orphans. No one is taking care of us.”

Indeed, six years after ISIS was driven out of the Sinjar region of northern Iraq, the Yazidi homeland is still riddled with unexcavated mass graves and damaged and destroyed homes.

The children should be cared for by aid organizations in other countries, Baba Sheikh Elyas said. If the mothers wanted to go to third countries with the children, he said, no one would stop them.

Another Yazidi leader, Prince Hazem Tahsin Bek, said the children would be in danger if they returned with their mothers.

“The families can tolerate the women, but they will not endure the children,” he said. Asked whether that meant the children could be killed, he said that was a possibility.

When one of the women called her family this week to tell them she had her daughter and hoped that the family would accept them, one of her brothers threatened her and the child. “I hope the government will find a safe place for us,” she said.

Nadia Murad, a Yazidi survivor, advocate and Nobel Peace laureate, has said she believes the women should be allowed to decide whether to be reunited with their children.

Before the women embarked on the trip to recover their children, Mr. Galbraith told them that third countries would take them in, a prospect that is far from assured.

At the safe house a few days later, the large house rang out with the shrieks and laughter of small children, all under age 6. Some of the mothers watched them worriedly, still afraid of what might happen to them.

Several women said they hoped they would be able to be relocated to a third country together.

Most, but not all of the children, were beginning to bond with their mothers.

The mother of the 5-year-old said she was still struggling to get the girl to warm up to her. The girl had cried in terror at being taken away from the orphanage. But the woman said she was determined to make a new life for them.

“No one can make us live far from each other anymore,” she said.

Suddenly the woman with the 2-and-a-half-year-old shrieked.

“She said, ‘Mama’!” the woman exclaimed. She leaned down to the little girl dressed in pink and urged her to say it again.