Hi. Welcome to On Politics, your guide to the day in national politics. I’m Lisa Lerer, your host.

[Get On Politics delivered to your inbox.]

The election is over (at least in most places), and that means all the winners now turn to an even bigger challenge: governing.

Few will have it tougher than J.B. Pritzker, the incoming Democratic governor of Illinois.

Mr. Pritzker, the billionaire heir to the Hyatt hotel fortune, spent an eye-popping $171.5 million of his own money on his campaign — more than any candidate in U.S. history. That money bankrolled Democrats up and down the ticket, who now hold not only the governorship but a supermajority in the State Legislature, both Senate seats and 13 of the state’s 18 House seats.

It also gave Mr. Pritzker a veto-proof majority. But the state’s fiscal problems are severe: Illinois is deeply in debt, with no clear path to financial solvency. Tens of thousands of residents leave each year. The current governor described the state as a “banana republic,” and others fear it may be simply ungovernable.

We caught up with the next Illinois governor at his campaign offices in downtown Chicago to chat about his record spending, lessons for the Democratic Party, and why he wanted what some have called “the worst job in American politics.” Here’s a condensed version of our conversation.

Lisa: When I told people I’d be talking to you, they almost all had one question: “Why would he ever want this job?”

Mr. Pritzker: Well, you don’t live in Illinois. If you lived in Illinois, you would see that governing the state of Illinois is a real opportunity. Yeah, we have challenges for sure, but we have a great state.

This is fundamentally a state full of working families that’s basically a Democratic state, and people want solutions and they don’t want ideological fervor.

As you said, these are really hard problems your state is facing, and the fiscal problems are the hardest of all. What are the first steps to righting the state’s budget?

I’ve been very clear since the beginning of the campaign that I believe that we need to fix the taxation system in our state. We have a very unfair, regressive tax system. That’s just unfair. So from the very beginning I campaigned on it. People understood what I stood for.

I’ve talked about legalizing marijuana, I’m in favor of legalizing recreational marijuana. So that’s another source of revenue. As you know, the Supreme Court ruled that sports betting can be allowed. So that’s something, we could look at expanding gaming in the state.

So those are all revenue, but I don’t want you to focus all on revenue, because balancing the budget is going to require us to bring efficiencies to state government and to grow jobs in the state.

You spent a literal fortune on your race, including $7 million bankrolling Democratic Statehouse races. You won by double digits. Could you have done it for less?

Where were you earlier on? Maybe we could have saved money!

Not really. Remember, what we were trying to do, it wasn’t just about my race. It really was about winning for Democrats across the state.

And so one of the things — if you look at how we ran this race, I spent a lot of time in southern Illinois and central Illinois. It was really important to me to travel around the state, to listen to people across the state, and as a result we did better in downstate Illinois than Democrats have done in an awfully long time. And so did the rest of the Democratic ticket.

Do you think there’s a lesson here for the national Democratic Party?

We did do very well, and I think we did well for two reasons. We recruited hundreds of candidates to run for county board races in places where Democrats haven’t run for a long time. This is a lesson, I must say, that I learned from the Ralph Northam race in Virginia and Terry McAuliffe and his efforts. They made sure that Democrats had candidates in every state representative race.

We tried to fill as many of the races as we could. In many counties, where there were all Republicans on the county board, now they’ve got a couple of Democrats because we ran people. So that’s one lesson. It’s all about the ground game.

But here’s the other reason, and I think this is really important. Our campaign was really a campaign about what I call the kitchen table issues. It’s jobs and wages.

Those kitchen table issues, those are the things that I think made my parents Democrats. That’s what made people Democrats for decades. And I think in some ways, you know, we got away from that as a party. And I really think we need to be focused on that.

Is focusing on economic issues the way the Democrats can expand their support in 2020?

The complicating factor with that is President Trump, right? There’s this real hunger in the Democratic base for this very strong anti-Trump message, and that can block out everything else. How do you manage that?

Everywhere I went, people knew what I felt about Donald Trump.

So if you’re asking me, can Democrats run with an anti-Trump message? Sure. But I think that you’ve got to back it up with issues. It can’t just be you don’t like the guy.

You’ll be in a powerful position to influence the conversation in the party during the presidential primary. Do you have a preference so far?

Lisa, I like them all. They’re all Democrats. I have not gotten involved, and I don’t have a preferred candidate at the moment. But, as you know, I worked hard for the first woman ever to be nominated by a major party.

And I think it would be important for us as Democrats to make sure that we’re on message and that we’re putting forward a ticket that’s representative of who we are as Democrats.

[Sign up here to get On Politics in your inbox every evening.]

What is ranked-choice voting? 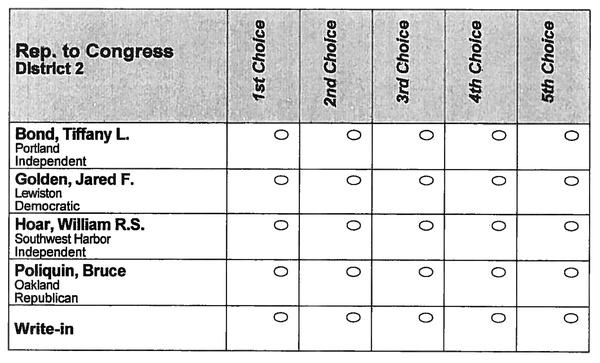 Bruce Poliquin, the last remaining Republican House member in New England, lost his seat today when it was announced that the Democrat Jared Golden had defeated him in the race for Maine’s Second District.

And while quite a few House districts have taken more than a week to declare a winner, Maine’s Second stands out because of the reason for the delay: The state was the first to use a new style of voting, called “ranked choice,” in a general election for a federal office.

What is ranked-choice voting? The Times’s Kate Taylor and Liam Stack broke it down:

1. Voters rank their choices, instead of just picking one candidate.

2. If a candidate gets more than 50 percent of the first-choice votes, they win. If not, the election moves to an elimination round.

3. The candidate in last place is removed from contention. For each ballot they won, the candidate ranked as the second choice now gets that vote.

4. This process repeats, round by round, until one candidate has received over 50 percent of the ballots.

(If you want to see it explained using sticky notes, check out this video from Minnesota Public Radio.)

Advocates for ranked-choice voting say the system allows voters more freedom, since they can rank a third-party candidate as their first choice without worrying about throwing away their vote. It also helps increase civility, they say, because candidates need to appeal to more than just their base to win second-place votes.

But not everyone loves the system. Because it is more complex, critics say it could depress turnout and lead to more errors by voters who don’t understand the ballot. And in a rural state like Maine, where half of the communities count votes by hand, they argue it could also lead to more errors by the people doing the counting.

What to read tonight

• Climate change is altering Yellowstone National Park so quickly that plants and animals may not be able to adapt.

• You haven’t heard of T-Series? Oh, it’s only the most watched YouTube channel in the world.

• The best news we’ve heard all week: “Batkid,” who drew national attention a few years ago when he lived out his wish to be Batman for a day, is now cancer free.

It’s hard not to worry when incidents like this — a man screamed “Heil Hitler! Heil Trump!” in a crowded theater — just seem like the new normal.

Were you forwarded this newsletter? Subscribe here to get it delivered to your inbox.

Thanks for reading. Politics is more than what goes on inside the White House. On Politics brings you the people, issues and ideas reshaping our world.

In 1870, Fanny Graham, 22, and Stella Boulton, 21, were both arrested after one of them used the toilet at The Royal Strand theatre in…