When State Representative Bobby Kaufmann of Iowa spoke in February in support of a restrictive voting bill he was sponsoring, he made what might once have been a startling acknowledgment: He could not point to any problems with November’s election that demonstrated a need for new rules.

But many Iowans believed there had been problems, he said. And that was reason enough to allow less early voting, shorten Election Day polling hours, put new limits on absentee balloting and forbid counties to have more than one ballot drop box. 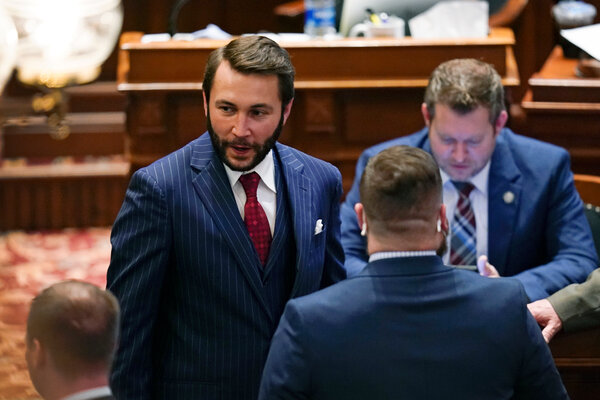 The bills demonstrate how disinformation can take on a life of its own, forming a feedback loop that shapes policy for years to come. When promoted with sufficient intensity, falsehoods — whether about election security or the coronavirus or other topics — can shape voters’ attitudes toward policies, and lawmakers can cite those attitudes as the basis for major changes.

The embrace of the falsehoods also showcases the continuing power of Mr. Trump inside the Republican Party, which has widely adopted and weaponized his election claims. Many Republicans, eager to gain his support, have raced to champion the new voting laws. Those who have stood up to his falsehoods have paid the price. Representative Liz Cheney was ousted from her House leadership post on Wednesday after repudiating what she called the “big lie.”

Lawmakers in at least 33 states have cited low public confidence in election integrity in their public comments as a justification for bills to restrict voting, according to a tally by The New York Times. In several states — including Arizona, Florida, Georgia and Iowa — the bills have already been signed into law, and legislation in Texas is very close to passage.

Voter fraud is extremely rare in the United States, and officials in every state and at the federal level affirmed that the 2020 election was secure.

“It’s like a perpetual motion machine — you create the fear of fraud out of vapors and then cut down on people’s votes because of the fog you’ve created,” said Michael Waldman, the president of the Brennan Center for Justice at New York University. “Politicians, for partisan purposes, lied to supporters about widespread fraud. The supporters believe the lies, and then that belief creates this rationale for the politicians to say, ‘Well, I know it’s not really true, but look how worried everybody is.’”

Calls to change election laws because of public perceptions are not new: Reports in 2001, 2005 and 2008, for example, warned of the potential repercussions of voter distrust. In 2008, the Supreme Court upheld Indiana’s voter ID law based partly on the argument that it would increase confidence in the state’s elections. And confidence tends to fall at least somewhat after every election among voters in the losing party, according to Charles Stewart III, a director of the Election Data and Science Lab at M.I.T.

But there are some key differences this year, voting rights and disinformation experts say. First, the scale of the legislative efforts — as measured both by the number of bills introduced and the extent of the restrictions they propose — is greater than in past election cycles. Second, the falling confidence in the electoral system is directly traceable to a disinformation campaign. And the drop in confidence among Republicans is far steeper than anything seen in past cycles.

Robin Vos, the Republican speaker of the Wisconsin State Assembly, told reporters in January, “We have to improve the process when literally hundreds of thousands of people in Wisconsin doubt that the election was held in a way that didn’t have substantial charges of fraud.” State Senator Judy Ward of Pennsylvania, a Republican, wrote in a memo that a bill she had introduced would free elections “from the shadow of doubt that has been cast over the democratic process.” State Senator Ralph Hise of North Carolina, also a Republican, said in March, “Even if there is no cause for that suspicion, perception impacts trust, and that’s something to take seriously.”

In an email to The Times, Mr. Hise said it would be wrong to suggest “that Republicans are ‘evolving’ their arguments in bad faith to try to suppress votes.”

“Lack of voter confidence is real; the rhetoric surrounding the 2020 election certainly contributes to that, but it existed for many years before 2020 and impacts voters from both parties,” he said. “Elected officials have a responsibility to respond to declining voter confidence, and failure to do so is dangerous to the health of our republic.”

Ms. Ward, when asked whether she considered low voter confidence a sufficient basis for new laws, said, “We must work in a bipartisan way to restore confidence in our elections or, I fear, many people will walk away from the process because they no longer believe in the integrity of our election system.”

A spokesman for Mr. Vos did not respond to a request for comment. Neither did Mr. Kaufmann, the Iowa representative.

Arguments about the public’s flagging confidence in elections have made their way into the official text of bills, including in Georgia, which enacted a sweeping law limiting drop boxes and provisional balloting, requiring identification for absentee voting and making it illegal to give food or water to people waiting in line to vote, among other changes.

The legislation, 98 pages long, was an opening salvo in a Republican effort that has resulted in new restrictions in several swing states and is still continuing. It put Georgia at the center of a national storm, with Major League Baseball moving the All-Star Game and big employers like Delta Air Lines and Coca-Cola denouncing the restrictions under public pressure. And its supporters’ stated rationale, as outlined in a lengthy introduction to the bill, was almost entirely about voter confidence.

“Following the 2018 and 2020 elections, there was a significant lack of confidence in Georgia election systems, with many electors concerned about allegations of rampant voter suppression and many electors concerned about allegations of rampant voter fraud,” the bill said. “The changes made in this legislation in 2021 are designed to address the lack of elector confidence in the election system on all sides of the political spectrum, to reduce the burden on election officials, and to streamline the process of conducting elections in Georgia by promoting uniformity in voting.”

The “all sides” framing belied the fact that the bill was supported only by Republican lawmakers and that, while it contained some provisions expanding voting access, it was geared mostly toward mollifying those who believed “allegations of rampant voter fraud” — without ever saying those allegations, which are false — were true.

These sorts of arguments are unsurprising after a disinformation campaign like Mr. Trump’s, experts said, and they tend to insulate legislative efforts from challenges based on the facts of how rare fraud is.

“We are not going to fact-check our way out of problems of trust,” said Renée DiResta, a disinformation researcher at the Stanford Internet Observatory. “People believe these claims because they trust the people who are making these claims, and they’ve also been conditioned to believe that anyone not making these claims and anyone on the other side is inherently untrustworthy.”

Disinformation experts said improving voter confidence in elections was a sensible legislative goal. But they denounced the circularity of the current push and the extent to which it was premised on disinformation.

“It is absolutely legitimate to be concerned about election integrity,” said David J. Becker, the executive director of the Center for Election Innovation & Research. “Even though fraud isn’t widespread, it’s good for voters to know there are protections in place against it. What’s not OK is to invent fake threats and to ignore the evidence and to act in a way that’s clearly designed to result in a partisan outcome.”