The jockeying for position is well underway in case the 82-year-old House speaker decides to retire. Among those praising her ahead of a possible run: another Pelosi. 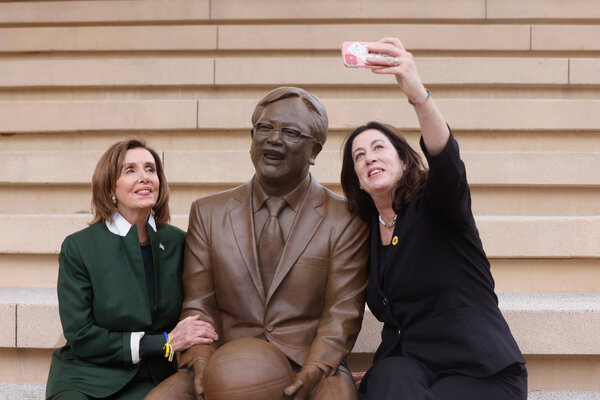 In 2018, she pledged that 2022 would be her last year as House Democratic leader, acceding to a term limit to quell an uprising and secure a second stint as speaker. In January, she announced she was running for another two-year term in the House.

With the House’s passage of the sweeping measure to address climate change and prescription drug prices on Friday — “a glorious day for us,” Ms. Pelosi beamed — and her China-defying trip to Taiwan serving as a diplomatic career capstone, the question of what comes next for Ms. Pelosi is only intensifying.

Will she press to stay on as speaker if Democrats somehow hold the House? Or, if Republicans take control, will she simply retire?

She could break her 2018 pledge and seek to remain Democratic leader in the minority. Those close to her describe only one option as inconceivable: a demotion to the backbench.

Ms. Pelosi, 82, has avoided discussing her plans past November and declined to be interviewed. A spokesman, Drew Hammill, issued the same, terse statement he has offered previously: “The speaker is not on a shift,” he said. “She’s on a mission.”

Some clues to Ms. Pelosi’s future may be found closer to her home in San Francisco — where the tantalizing possibility of the city’s first open congressional seat since the fall of the Soviet Union has become the political talk of the town.

Would-be candidates, labor leaders, political strategists, donors and activists are already busily plotting what a race to succeed her would look like — albeit almost entirely in secret, to avoid antagonizing Ms. Pelosi, who has made plain she wants to retire on her own terms.

“This is very much the campaign that shall not be named,” Dan Newman, a San Francisco-based Democratic operative, said of the early jostling. “Nancy Pelosi is a force of nature, and no one wants to appear in any way disrespectful or dismissive.”

In interviews, more than a dozen officials said local Democrats were preparing for the possibility that Ms. Pelosi could resign rather than stay and hand the gavel to a Republican. That would trigger a snap special election in San Francisco, held within 150 days — a sprint for what, given the city’s politics, could amount to a de facto lifetime appointment to Congress.

Adding to the intrigue: One potential successor is Ms. Pelosi’s daughter Christine Pelosi, a party activist and Democratic National Committee executive committee member who serves as an adviser to her mother, has written a book about her and often accompanies her to local union halls, speeches and parades. She slings her opinions online from a Twitter handle, @sfpelosi, that could at a glance be confused for one her mother might use.

Wrapped up in the elder Ms. Pelosi’s decision and its timing are intertwined questions of power, legacy and dynasty, and how fully a barrier-breaking, notoriously competitive public figure can stage-manage her exit.

There is also Washington politics: Ms. Pelosi called herself “a bridge to the next generation of leaders” four years ago, signaling her desire that her departure coincide with those of her fellow-octogenarian lieutenants, Representatives Steny Hoyer, 83, and James Clyburn, 82. Neither has agreed.

In San Francisco, similarly, the Pelosi name remains beloved, but there is no guarantee of a controlled succession.

A popular state senator, Scott Wiener, whose district overlaps Ms. Pelosi’s, is widely seen as laying the groundwork for a campaign. Mr. Wiener spent nearly $2.5 million on his re-election and has been wooing supporters under the guise of good politics, though his ambitions to become San Francisco’s first openly gay congressman are an open secret.

In an interview at a Brazilian pastry shop, the 6-foot-7-inch Mr. Wiener refused even to broach the possibility of a post-Pelosi era. “The longer she stays, the better for our country,” he said. “I’m on Team Nancy.”

It was a comment befitting what Tony Winnicker, a longtime local Democratic strategist, called “the first rule of wanting to run for Nancy Pelosi’s seat.”

“You never talk about it in a way that suggests Nancy will ever leave,” he said.

As former chair of the women’s caucus of the state Democratic Party, the younger Ms. Pelosi, 56, has been outspoken in fighting sexual harassment.

Increasingly, she and Mr. Wiener, 52, are crisscrossing at local events, like a Pride breakfast where he and the elder Ms. Pelosi both delivered speeches. “This has been a family affair for us for more than 30 years,” Nancy Pelosi said, recognizing her daughter’s presence. (She also acknowledged Mr. Wiener.)