Gillespie County, which President Donald J. Trump won by 59 percentage points in 2020, was left without an election staff. The state planned to help. 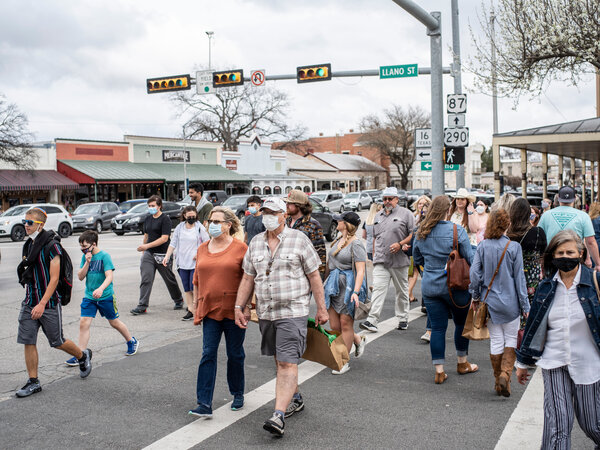 The recent resignations of all three election officials in a Texas county — at least one of whom cited repeated death threats and stalking — has created turmoil in an area that President Donald J. Trump won by 59 percentage points in 2020.

The exodus left Gillespie County, which has 27,000 residents and is about 75 miles west of Austin, without an election staff just over two months before early voting begins for the Nov. 8 midterm election, though the state planned to provide support to the county.

The resignations of the county’s elections administrator, Anissa Herrera, and the office’s remaining two employees were confirmed to The New York Times on Thursday by Sam Taylor, a spokesman for the Texas secretary of state. He said the county did not provide specific details about the nature of the threats.

“Threats on election officials are reprehensible, and we encourage any and all election officials who are targeted by such threats to report them to law enforcement immediately,” Mr. Taylor said in an email, adding that “unfortunately, threats like these drive away the very officials our state needs now more than ever to help instill confidence in our election system.”

The resignations were reported earlier by The Fredericksburg Standard-Radio Post, which Ms. Herrera told, “The year 2020 was when I got the death threats.”

“I’ve been stalked, I’ve been called out on social media,” she said to The Standard-Radio Post. “And it’s just dangerous misinformation.”

Ms. Herrera did not elaborate to the news organization on the nature of the grievances that led to the threats against her and the other two employees who resigned. She did not immediately respond on Thursday to a message left at a phone number listed for her.

In a resignation letter that was obtained through a public records request by Votebeat, a journalism nonprofit focused on election administration and voting access, Ms. Herrera said that, in addition to threats, misinformation and insufficient staff, “absurd legislation” had completely changed her job.

Republicans in Texas enacted restrictions last year that included an end to balloting methods introduced in 2020 to make voting easier during the pandemic, like drive-through polling places and 24-hour voting. The state also barred election officials from sending voters unsolicited absentee-ballot applications and from promoting the use of voting by mail, while greatly empowering partisan poll watchers.

It was not clear whether Ms. Herrera had filed any complaints with the Gillespie County sheriff’s office or the Fredericksburg Police Department, neither of which immediately responded to requests for comment on Thursday.