The administration is seeking help in urging Republicans to get inoculated. But the president said he was not sure how much value there was in enlisting his predecessor. 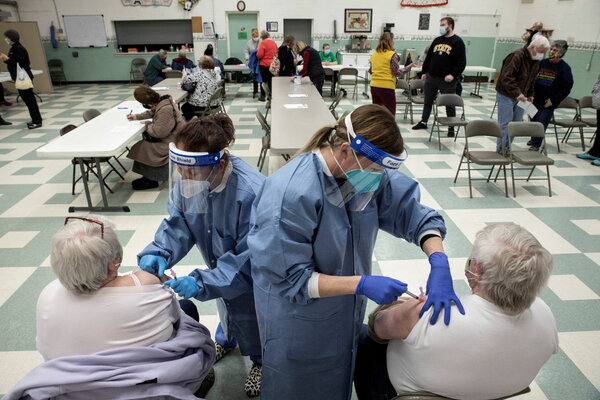 By Annie Karni and Zolan Kanno-Youngs

WASHINGTON — As President Biden pushes to vaccinate as many Americans as possible, he faces deep skepticism among many Republicans, a group especially challenging for him to persuade.

While there are degrees of opposition to vaccination for the coronavirus among a number of groups, including African-Americans and antivaccine activists, polling suggests that opinions in this case are breaking substantially along partisan lines.

With the Biden administration readying television and internet advertising and other efforts to promote vaccination, the challenge for the White House is complicated by perceptions of former President Donald J. Trump’s stance on the issue. Although Mr. Trump was vaccinated before he left office and urged conservatives last month to get inoculated, many of his supporters appear reluctant to do so, and he has not played any prominent role in promoting vaccination.

Asked about the issue on Monday at the White House, Mr. Biden said Mr. Trump’s help promoting vaccination was less important than getting trusted community figures on board.

“I discussed it with my team, and they say the thing that has more impact than anything Trump would say to the MAGA folks is what the local doctor, what the local preachers, what the local people in the community say,” Mr. Biden said, referring to Mr. Trump’s supporters and campaign slogan “Make America Great Again.” Until everyone is vaccinated, Mr. Biden added, Americans should continue to wear masks.

Widespread opposition to vaccination, if not overcome, could slow the United States from reaching the point where the virus can no longer spread easily, setting back efforts to get the economy humming again and people back to a more normal life. While the problem until now has been access to relatively tight supplies of the vaccine, administration officials expect to soon face the possibility of supply exceeding demand if many Americans remain reluctant.

But many conservative and rural voters continue to point to a variety of worries. Some conservatives harbor religious concerns about the Johnson & Johnson vaccine, which uses abortion-derived fetal cell lines.

Republicans often cite distrust of government as a reason to not be vaccinated, the CBS poll found. They worry the vaccines were produced too quickly. And in some communities, so many people have already had the coronavirus that they think they have developed herd immunity and do not need the shots.

Other supporters of Mr. Trump believe Democrats exaggerated the toll of the pandemic to hurt the former president.