WASHINGTON — With the government shutdown over for now, the 116th Congress will hit reset this week, showcasing a Democratic agenda in the House that was overshadowed by the struggle to reopen the government and furnishing both chambers with early opportunities to test whether divided government can produce results.

The House, which spent weeks passing futile bills to reopen the government, will turn to legislation higher on the Democrats’ priority list, including a bill to raise pay for civilian federal employees. Leading Democrats also plan to reintroduce a marquee bill to close the pay gap between men and women that they have fought to enact for years.

In the Senate, Republicans will try to push through a bipartisan Middle East policy bill that includes a disputed provision targeting the movement to boycott, divest from and sanction Israel. With the measure, Republicans will test for fractures in the resurgent Democratic Party, where Palestinian right activists have found new voices in House freshmen such as Rashida Tlaib of Michigan and Ilhan Omar of Minnesota.

And in both chambers, lawmakers have teed up a high-impact lineup of hearings — effectively the first of the year. House Democrats will zero in on the cost to the military of President Trump’s election-eve troop deployments to the border and begin to consider their ambitious legislation to expand voting rights, make political giving more transparent and do away with partisan gerrymandering.

Senators will press the leaders of the nation’s intelligence services on the status of global threats, kick off a push to search for common ground on cutting prescription drug prices and begin to advance dozens of Mr. Trump’s nominees, including his pick for attorney general, William P. Barr.

“We have a lot of different things we have to deal with,” said Representative Jerrold Nadler of New York, chairman of the House Judiciary Committee, which will hold the first hearing on Democrats’ ambitious elections bill on Tuesday. “The shutdown slowed things down somewhat, probably by a couple weeks. There is only so much time and attention people can give in a day.”

Looming over all of this action will be the ongoing border wall fight.

Mr. Trump is threatening to shut down the government again in less than three weeks if Congress cannot reach a deal that provides him money for a wall along the southwestern border, and Democrats and Republicans will enter formal negotiations this week to see if they can reach a compromise on border-security funding levels and what constitutes a “wall.” 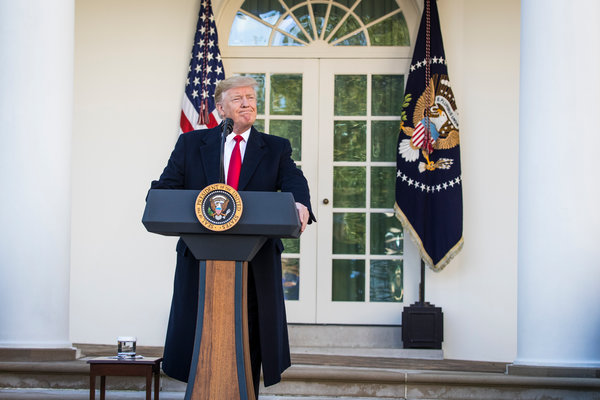 But with much of the early negotiating likely to take place behind closed doors, both parties seem to agree that after weeks of a near total shutdown eclipse, Congress needs to move on. They hope that some regular order can help heal the bruises left by the impasse.

“Border security and immigration issues are important, and we should deal with them, but we can deal with several important issues at the same time,” said Senator Susan Collins, Republican of Maine. “We can’t put the rest of the business of government on hold while these issues, important though they are, are resolved.”

For House Democrats, the return to normal governance provides a window to reclaim some of the attention the shutdown drained from the initial rollout of their legislative agenda. House Democratic leaders had insisted when they took control early this month that the shutdown would not impact their carefully choreographed agenda rollout. But it did.

Speaker Nancy Pelosi of California and her allies plan to hold a ceremony on Wednesday to formally reintroduce the Paycheck Fairness Act, a measure designed to equalize pay between men and women that Democrats have tried to enact for 20 years. Like other bills under consideration in the House, it is unlikely to be taken up by the Republican-controlled Senate, but it is a key piece of Democrats’ messaging to voters ahead of the 2020 elections.

Ms. Pelosi and Mr. Trump also are likely to renew discussion in the coming days about a date to reschedule the president’s State of the Union address, which was previously scheduled for Tuesday and became a casualty of the shutdown. Last week, Ms. Pelosi rescinded her invitation for the president to address Congress while the government was still shuttered, and has said subsequently that the two sides will work to find an agreeable date in the future to allow time to prepare.

On the House floor, Democrats will bring up a vote on legislation that would give nonmilitary federal workers a pay raise in line with the pay increase members of the military have received. The legislation, if it became law, would override an executive order issued by Mr. Trump a week into the shutdown that froze civilian federal pay.

The House Armed Services Committee will hold a hearing on Tuesday about the cost and rationale behind the deployment by Mr. Trump of thousands of active duty troops to the southern border. Representative Adam Smith of Washington, the committee’s chairman, said in a statement that “there has not been adequate justification for the use of our military personnel in this way.”

And the Judiciary Committee will hold the first hearing on the “For the People Act” to start building support for the legislation that would overhaul key aspects of the way federal elections are financed and held. In an interview, Mr. Nadler ticked off a dozen or so other policy areas awaiting attention by his committee alone.

“We were all elected on much of this stuff,” he said. “There is a frustrating backlog.”

Even lawmakers in Mr. Trump’s party, many of them rattled by the costs of the longest shutdown in the nation’s history, have signaled they are eager to broaden their work, in part to lower the temperature around immigration talks and show voters they can govern.

Ms. Collins said she had stalled the introduction of important bills because of the shutdown, and she stressed that the Senate needs to “demonstrate to the American people that we can work together on issues that really affect them,” such as infrastructure, prescription drug pricing and retirement security.

“One of the frustrating side effects of this awful shutdown was that it prevented the Senate from getting a fast start on a lot of important issues,” she said on Sunday.

Several Senate committees will begin to change that this week.

In the Senate Judiciary Committee, Republicans will effectively restart the gears of machinery they used in the last congress to confirm record numbers of conservative judges to lifetime appointments on federal courts all over the country. On the agenda for a meeting on Tuesday are Mr. Barr, Mr. Trump’s nominee for attorney general, as well as six potential federal appeals court judges and more than three dozen other judicial nominees, the committee’s chairman, Senator Lindsey Graham of South Carolina, said last week.

And though committee customs are such that the nominees are unlikely to get a final vote this week, Mr. Graham is taking an important step in filling up a reservoir of nominees that Senator Mitch McConnell of Kentucky, the majority leader, can slowly bring to the Senate floor for confirmation.

And Senator Charles E. Grassley, Republican of Iowa, will convene the Senate Finance Committee for the first in what he said would be a series of sessions focused on “the sky-high cost” of prescription drugs — one of the few areas in which Democrats and some Republicans believe they could reach an agreement with Mr. Trump this term.

“We already know what the problem is,” Mr. Grassley said last week. “It’s time to look at bipartisan solutions and work to turn them into law.”

The legislative package the Senate will vote on beginning Monday, called the Strengthening America’s Security in the Middle East Act, is expected to pass with bipartisan support, but not without controversy. It pairs three noncontroversial bills with a fourth that affirms the right of state and local governments to break financial ties with companies that participate in efforts to boycott, divest investments from and sanction Israel, a movement known as B.D.S.

Supporters view the legislation as a key pillar of a sustained push to counter growing support for the B.D.S. movement and continue what has been historically strong bipartisan support for Israel. But Republicans believe that it will highlight the divide among Democrats, between that more traditional view and that of a younger generation in the House critical of Israel’s treatment of Palestinians.

Already the National Republican Congressional Committee has taken to labeling Ms. Omar “an anti-Semite” for her positions on Israel, a charge she hotly rejects.

“With the shutdown over, I look forward to my colleagues putting politics aside and considering this bill that will keep America and our allies safer and more secure,” Senator Marco Rubio, Republican of Florida and the bill’s lead author, said in a statement on Sunday.