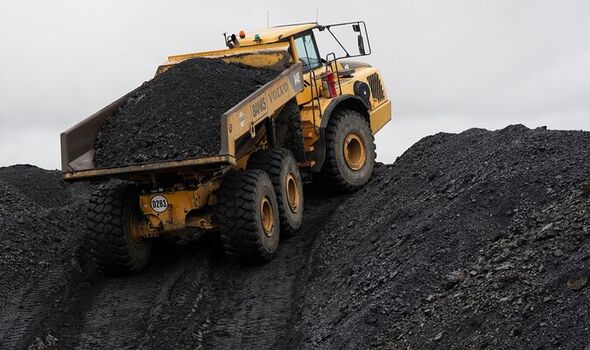 The UK has pledged to phase out imports of Russian oil by the end of the year amid international outrage at the invasion of Ukraine and pressure is mounting for further action. In January alone, more than £14.6million was spent on imports of coking coal from Russia. Campaigners want levelling up secretary Michael Gove to approve plans for a new mining operation near Whitehaven in West Cumbria to supply the local and European steel industry.

Ashfield Conservative MP Lee Anderson said: “If we are really serious about sanctions then [we] should also ban coal imports. We should not be funding Putin’s war chest when we can mine better quality coal in the UK.

“We have a coal mine ready to go which [would] end our dependency on foreign coal and just this week I wrote to Michael Gove to urge him to make a decision as soon as possible.

He said: “[It] is madness that we have a natural resource that we are not exploiting and yet importing it from other countries.”

Mike Starkie, the directly-elected Conservative mayor of the Cumbrian borough of Copeland, said the proposed mine could transform the local economy and provide “extremely well-paid jobs” at a time of cost of living crisis.

“It’s a ridiculous situation to be importing coking coal when we can mine it [in a] far more environmentally friendly [way] in the most modern mine ever constructed anywhere in the world,” he said, adding: “In the last two weeks I’ve written to Michael Gove and Boris Johnson asking them to immediately announce the go-ahead for the mine, given what’s happened [with] Russia it’s just senseless to delay any further.”

West Cumbria Mining won the local council’s go-ahead for the mine in October 2020 but this was suspended in February last year after the Government’s climate change committee warned that the “decision to award planning permission to 2049 will commit the UK to emissions from coking coal, for which there may be no domestic use after 2035.” A planning inquiry has since been held and the Government is waiting for its report and recommendation.

Environmental groups including Friends of the Earth have opposed the development but support has come from both the National Union of Mineworkers (NUM) and the right-leaning Institute of Economic Affairs (IEA).

Andy Mayer, an energy analyst with the IEA, said: “The UK steel industry needs coking coal. It either imports it, and risks funding Russian tanks, or uses domestic sources subject to the UK’s higher environmental standards.

“All the politicians, NGOs and eco-warriors campaigning to block the Whitehaven project, to open the UK’s first coal mine for 30 years, have played the role of Putin’s useful idiots, while harming British industry.

“Michael Gove should approve the mine, let them deliver the coal, until such a time it is possible to replace it with a better alternative.”

Chris Kitchen of the NUM said: “[We are] against any imports of coal into the United Kingdom for whatever reason where we have the ability to produce our own. The case in point on coking coal is the granting of planning permission for the West Cumbria Mine which the NUM has supported and is currently stalled by the current Government.

“On a wider issue we are now in the midst of an energy crisis which has been caused by the politically motivated anti-coal policies of successive governments… Coal mined in the UK, providing jobs for British mineworkers can be burned cleanly with the introduction of new coal power stations equipped with Carbon Capture and Storage (CCS).

“This would have provided a clean, secure and affordable source of energy for the UK.”

A Government spokesman said: “A public inquiry into the Whitehaven mine took place in September and October. The independent Inspector who oversaw the inquiry is now preparing a report and recommendation for ministers in [the department for levelling up, housing and communities] alone to consider.

“It would not be appropriate to comment further whilst this independent process is ongoing.”