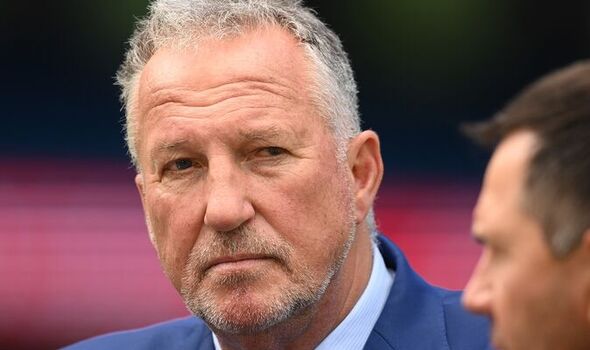 Now a trade envoy, the peer is well known to Australians for his fearsome performances on the field. He said closer trade-ties with the nation will strengthen relations with a like-minded ally in an increasingly dangerous world.

And the deal, which is being put before the Commons for sign-off next week, should also help bring down costs for British households.

Lord Botham said that the Trade Bill will implement the “game-changing” deal and MPs “must get behind it”.

“Our trade deal with Australia will remove tariffs that hamper our businesses, potentially boosting our economy by billions. It could provide lower prices and more choice for British shoppers,” he said.

The peer, affectionately known to cricket fans as Beefy, said the agreement will “put Britain on the front foot”.

“At a time when the UK’s economic health and our long-term security is so important – it’s crucial MPs back it.”

International Trade Secretary Anne-Marie Trevelyan said the deal is crucial for both economic growth in the two countries and to safeguard “shared values” during a visit to the Commonwealth nation.

Speaking to the Australian-British Chamber of Commerce yesterday (Friday), she said the £2.3 billion agreement marks the new post-Brexit era but also shows the shared values between nations.

Ms Trevelyan said: “Our friendship with Australia is more important than ever.

“Together, we show the world that we will stand up for liberty, that we fight back against tyranny, and we will defend our societies’ shared values.”

Official estimates suggest the trade deal could produce an increase of as much as 0.08 per cent of gross domestic product (GDP) in the long run.

Shoppers are expected to benefit from cheaper prices on wine and other Australian imports while UK exports in premium items like Scottish whisky and cars will rise significantly.

UK firms will also have guaranteed access to bid for an additional £10 billion worth of Australian public sector contracts a year.

Architects, scientists, researchers, lawyers and accountants will have access to protected visas to work in Australia for the first time.

The pact is the first “from scratch” negotiated since the UK left the EU’s single market.

“Almost every day there is an example of a new commercial or investment deal between our nations,” Ms Trevelyan added.

The deal also paves the way for membership of the Indo-Pacific trade bloc, made up of 11 countries with a combined GDP of £9 trillion.