Pentagon officials noted that the request was broad and did not specify the number or types of forces needed. 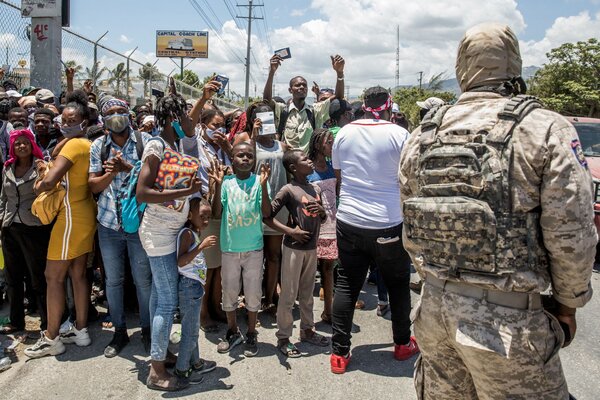 WASHINGTON — Haiti’s request for U.S. troops to help stabilize the country following the assassination of its president presents President Biden with a difficult choice: send forces to help a neighbor even as he is trying to pare down America’s military footprint overseas, or refrain and risk allowing the chaos unfolding there to escalate into a refugee crisis.

Thus far, administration officials have expressed caution about any deployment to Haiti, reflecting the fast pace of events since attackers killed President Jovenel Moïse in his home on Wednesday, but also a broader shift in American attitudes toward military interventions as the 20-year war in Afghanistan winds down.

Biden administration officials, while sympathetic to the humanitarian misery unfolding some 700 miles south of Florida, and mindful of a potential mass exodus of Haitian refugees like one that occurred in the 1990s, nevertheless show no immediate enthusiasm for sending even a limited American force into the midst of politically-based civil strife and disorder.

The administration has said it will send officials from the F.B.I. and the Department of Homeland Security to Port-au-Prince to assess how they might help assist the government’s investigation into the murky circumstances of Mr. Moïse’s killing.

But Pentagon officials were taken off guard by the Haitian request late Friday. While they said it would be dutifully reviewed, there is little appetite among senior military leaders to dispatch U.S. troops.

“We are aware of the request and are analyzing it,” John F. Kirby, the chief Pentagon spokesman, said in a telephone interview on Saturday, noting that the request was broad and did not specify numbers or types of forces needed.

One senior administration official put it more bluntly late Friday: “There are no plans to provide U.S. military assistance at this time.”