The president is expected to talk about his plans to address gun crime in an address in Wilkes-Barre, Pa. 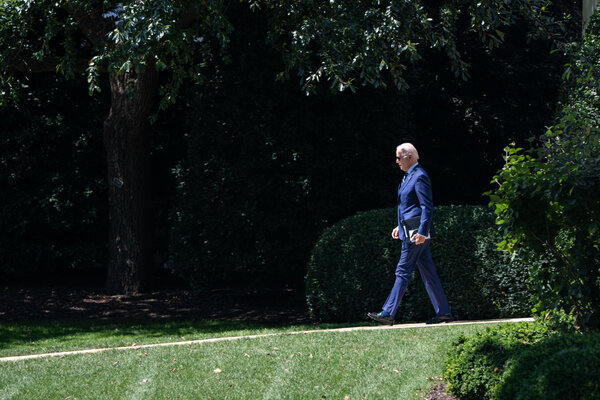 WASHINGTON — For months, President Biden has tried to blunt attacks that he is soft on crime by distancing himself from progressive calls to defund police departments. In a speech in Pennsylvania on Tuesday, Mr. Biden is expected to take a page from his opponents’ playbook and accuse Republicans of no longer being the party of law and order.

During a visit to Wilkes-Barre, Mr. Biden will say he has made available billions of dollars to invest in law enforcement agencies, according to a White House official. He will highlight a bipartisan gun bill intended to prevent dangerous people from accessing firearms, a nod to one of his recent legislative accomplishments ahead of the congressional elections in November.

Mr. Biden is also likely to go on the offensive in a state holding pivotal elections for the House and Senate as well as governor. His remarks come soon after some Republicans reacted with fury to the F.B.I.’s search for classified documents in former President Donald J. Trump’s home in Palm Beach, Fla., on Aug. 8.

Some congressional Republicans, including members of leadership, called to “defund” or even “destroy” the federal law enforcement agency over the search, prompting others, including former Vice President Mike Pence, to warn the party against assailing law enforcement.

“We don’t believe in defunding the F.B.I.,” Karine Jean-Pierre, the White House press secretary, told reporters on Air Force One on Tuesday.

The president “does not believe in defunding for the police,” she said. “He believes in funding the police. That’s what you’ll hear from him today.”

Mr. Biden has long tried to distance his party from calls to defund the police — a message that grew from racial justice protests in 2020 demanding systemic changes in policing. Republicans seized on those calls, which Mr. Biden never espoused, to accuse his party of not doing enough to fight crime.

Later this week, Mr. Trump is also expected to visit Wilkes-Barre to stump for Republican candidates.

“The agenda of Biden Democrats has left Pennsylvania communities less safe, and this is why Pennsylvanians will be voting for a new direction in November,” said Ronna McDaniel, the chairwoman of the Republican National Committee.

On Tuesday, Mr. Biden will describe how his 2023 budget request includes funding to hire 100,000 new officers. He will also again encourage state and local leaders to draw from $350 billion of funds to bolster local law enforcement. In a nod to Democrats who have called for more accountability of police departments, Mr. Biden will spotlight pandemic relief funds that have paid for community-based violence prevention programs.

Still, some progressive Democrats have grown concerned that Mr. Biden’s emphasis on funding the police has come at the cost of investments in police reform and programs that empower community leaders and health officials to prevent crime without a police response.

“The history of funding policing in the United States is writing blank checks to the tune of billions of dollars with no accountability attached,” said Bree Spencer, senior program manager for justice reform at the Leadership Conference on Civil and Human Rights, a legislative advocacy coalition. “That seems to be what we’re doing now, so that in no way is indicative of police reform. That is business as usual.”