WASHINGTON — President Biden on Monday directed the Education Department to conduct an expansive review of all policies on sex and gender discrimination and violence in schools, effectively beginning his promised effort to dismantle Trump-era rules on sexual misconduct that afforded greater protections to students accused of assault.

With two executive orders — one ordering the new education secretary to review those policies, and the other establishing a gender-focused White House policy council — Mr. Biden, an author of the Violence Against Women Act, waded into an area that has been important to him but has been politically charged for more than a decade.

The Obama administration issued guidance to schools, colleges and universities that critics in and out of academia said leaned too heavily toward accusers and offered scant protections or due process for students and faculty accused of sexual harassment, assault or other misconduct. The Trump administration swept those aside and delivered the first-ever regulations on sexual misconduct, which many saw as swinging too far the other way, offering the accused too much power through guaranteed courtlike tribunals and cross-examination of accusers.

It is unclear whether Mr. Biden’s review of all policies under Title IX, a 1972 law that prohibits sex-based discrimination in federally funded schools, will return the rules to the Obama administration’s approach or find some middle ground that incorporates lessons from the last two administrations. When asked what direction Mr. Biden might take, a White House official said on Monday that the executive order “speaks for itself.”

“We’re looking for a process that does not turn us into courts, that allows us to treat both sides fairly and equally, and does not attempt to micromanage campus proceedings,” said Terry W. Hartle, a senior vice president of the American Council on Education, which represents 1,700 college and university presidents and executives in higher education.

However the process proceeds, it is sure to illustrate just how much Title IX has become a political cudgel in the culture wars over sex, gender and education.

As vice president, Mr. Biden was integral to President Barack Obama’s efforts to overhaul Title IX, in part by issuing guidance that led to aggressive investigations of schools that had mishandled sexual assault complaints and threatened them with funding cuts. Rules proposed in 2018 by Betsy DeVos, the education secretary under President Donald J. Trump, wiped those out and cemented procedures that bolstered the due process rights of accused students.

Because Ms. DeVos went through the formal regulatory process with a draft rule, comment period and final rule, her successor, Miguel A. Cardona, must go through another regulatory procedure to replace the Trump rule with his own, which will take a year or more.

The Trump administration’s rules have been in effect since August, and lawsuits that sought to overturn them — including one to delay them as colleges grappled with the coronavirus pandemic — have failed.

“It’s not to say that they couldn’t loosen some of the Trump-era rules,” R. Shep Melnick, a politics professor at Boston College and the author of “The Transformation of Title IX: Regulating Gender Equality in Education,” said in an interview. “But if they try to go back to the Obama-era rules, I’m pretty sure that they would lose in court.”

Jennifer Klein, who will lead the re-established White House Gender Policy Council with Julissa Reynoso, the chief of staff to Jill Biden, the first lady, told reporters on Monday that “everybody involved” in a sexual complaint, “accused and accuser,” was entitled to due process.

“The policy of this administration is that every individual, every student, is entitled to a free — a fair education free of sexual violence, and that people — all involved — have access to a fair process,” said Ms. Klein, a former senior adviser to Hillary Clinton when she was the first lady.

Victim’s rights groups hailed the Obama-era rules for reversing longstanding practices on college campuses of sweeping sexual assault claims under the rug, and for extending wide-ranging protections from obstacles that had long stymied reporting of sexual assault. The guidance instituted a broad definition for what qualified as sexual harassment, discouraged cross-examination and required schools to use the lowest evidentiary standard in adjudicating claims.

The guidance, however, was also criticized by school administrators and due-process activists, who said it amounted to an illegal edict that incentivized schools to often err on the side of complainants. Hundreds of federal and state lawsuits have been filed by students accused of sexual misconduct since 2011, when the Obama administration issued its guidance, and dozens of students have won court cases against their colleges for violating their rights under those rules. 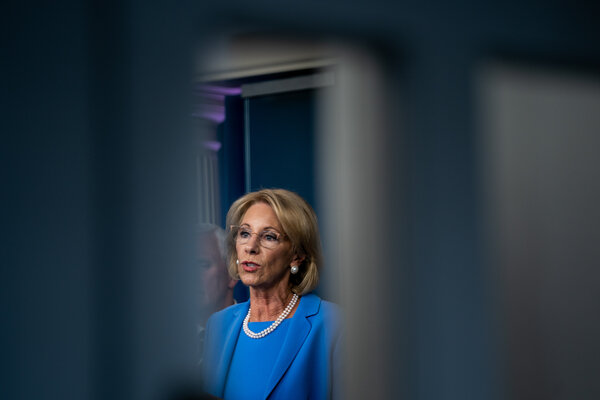 The DeVos rules lean heavily on legal precedent, including Supreme Court decisions, to narrow the definition of sexual harassment, tighten reporting requirements and detail the steps that schools must take to provide support for accusers. They also require colleges to hold a live hearing with cross-examination by a third party and offer schools the flexibility to choose their evidentiary standard. The rules also require that cases be investigated under a presumption of innocence and that parties have equal access to evidence and appeals processes.

The DeVos guidance also applies to all primary and secondary schools that receive federal funding, though there are adjustments for investigations involving small children.

Civil liberties groups that endorsed those rules said they were concerned about how the Biden administration’s efforts would shake out for survivors and accused students alike.

The Trump administration took into account more than 120,000 comments and several changes that victims’ rights groups pressed for, such as a dating violence definition, “rape shield” protections and mandating “supportive measures” for victims, even if they did not file a formal complaint.

Joe Cohn, the legislative and policy director at the Foundation for Individual Rights in Education, a nonprofit civil liberties group, said the new regulations reflected “a good-faith effort to try to make this process work for all students.”

When the Trump administration’s rules were proposed, Mr. Biden said they would “return us to the days when schools swept rape and assault under the rug, and survivors were shamed into silence.”

Ms. DeVos strongly criticized Mr. Biden’s objections to the rule last spring, when he was the presumptive Democratic presidential nominee, telling The Washington Examiner that she was “disgusted” by his position.

Victims’ rights advocates said the chilling effect they had feared from the DeVos guidance had borne out, even during the pandemic, when colleges have struggled to carry out the cumbersome and costly rules.

Sage Carson, the manager of Know Your IX, a survivor advocacy group, said that since the rules took effect in August, victims had reached out to the organization either confused about their rights under the new regulation or concerned that their schools were weaponizing it. The group has called on the Biden administration to write a new rule, issue new guidance and conduct a listening tour.

“We’re really seeing it used as a way for schools to confuse and manipulate survivors, which is really what we’ve seen for decades,” Ms. Carson said of the DeVos rules. “Now it’s this really scary process on the books, and it gives the schools a way to say, ‘Do you really want to go through this?’”

The Biden administration’s decision to review Title IX policies also comes as states around the country introduce their own legislation to bar transgender female athletes from competing on sports teams that do not match their biological sex at birth. Gov. Tate Reeves of Mississippi, a Republican, said last week that he would sign a bill barring transgender athletes from girls’ or women’s sports teams. A similar law enacted last year in Idaho has met legal challenges.

Mr. Melnick, the politics professor, said the Trump administration had revoked the Obama-era guidance on the rights of transgender students but had not issued a regulation.

“The Biden administration could simply reinstate the previous policy,” Mr. Melnick said, “which is that in anything that is sex segregated, schools should use gender identification.”

The administration in February retracted its support for a Trump-era lawsuit seeking to block transgender students from participating in girls’ high school sports. The Education Department’s Office for Civil Rights also reversed the Trump administration’s decision to withhold federal funding from schools in Connecticut, Dr. Cardona’s home state, that allowed transgender girls and women to compete on sports teams with biological girls and women.

“We have the tools that we have,” Ms. Klein said, “which are federal laws and the bully pulpit and clarity about our policy and values.”