Jeremy Hunt says he would make Esther McVey his deputy

In a  surprise announcement Mr Hunt revealed that his campaign had brought the two wings of the party together with a deal to make Ms McVey his Deuty Prime Minister. He told the BBC: “I also recognise that the leader of a political party has to win elections, and that means a broad appeal, so just as Tony Blair had John Prescott to broaden his appeal as his deputy prime minister, I will have Esther McVey as my deputy prime minister. She has won a lot of elections against Labour in the north, I have won them against Lib Dems in the south and I think we will be a formidable campaigning team.”

The move provides a powerful combination uniting the two wings of the Conservative Party bringing together former Remainer Mr Hunt and committed Brexiteer Ms McVey from the right.

Mr Hunt was both Foreign Secretary and Health Secretary and comes with huge government experience while Ms McVey was Work and Pensions Secretary, one of the most difficult briefs in Government, and she founded the influential Blue Collar Conservatism Movement which was instrumental in sweeping the Labour Red wall seats.

Writing exclusively, for Express.co.uk, Ms McVey explained her decision which has stunned many in the Conservative Party.

She said: “I am even braced for the inevitable abuse from people saying that I have sold out my principles.  Nothing could be further from the truth.

“In an article in the Express last week I set out the five priorities that are essential for the Conservative Party and its new leader: 1) Protecting Brexit and ensuring the Northern Ireland Protocol is fixed to protect the integrity of the United Kingdom; 2) cutting taxes whilst living within our means; 3) delivering on the Levelling Up agenda helping to ensure the North is able to maximise its potential; 4) reducing levels of immigration into the UK and sorting out once and for all illegal immigration – especially the dinghies coming over from France; and 5) to ensure we never again have full lockdowns and damaging restrictions in the face of a future covid-style pandemic.

“Jeremy Hunt has pledged to accept and deliver on all 5 of those priorities – so much for anyone who thinks that I am selling out on my principles.” 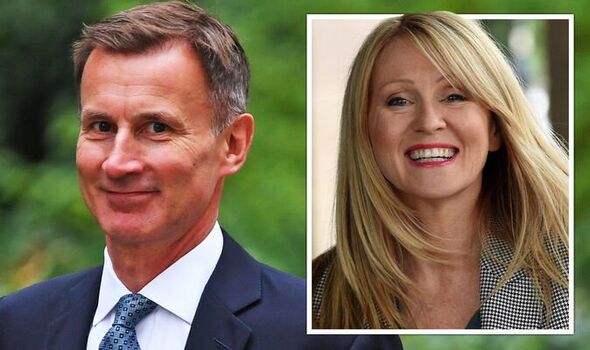