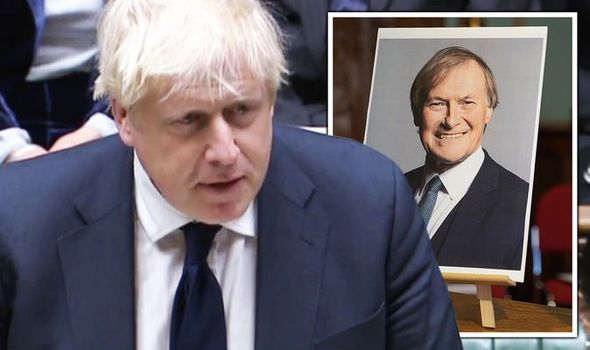 Paying tribute to the Southend West MP the Commons, Mr Johnson shared a series of anecdotes of the Conservative’s long-standing campaign to get the town of Southend city status.

Sir David campaigned for more than 20 years for the seaside town to be recognised with the honour.

The Prime Minister joked highlights of case “included a world record for playing most triangles being played at once; a group of stilt-walkers travelling non-stop from the Essex coast to Downing Street; and a visiting foreign dignitary allegedly flouting protocol by saying he liked Southend more than Cleethorpes”.

Mr Johnson told MPs: “I am happy to announce that Her Majesty has agreed that Southend will be accorded the city status it so clearly deserves.

“That Sir David spent almost 40 years in this House but not one day in ministerial office tells everything about where his priorities lay.

“He was not a man in awe of this chamber, nor a man who sought patronage or advancement.

“He simply wanted to serve the people of Essex, first in Basildon, then in Southend. And it was in the act of serving his constituents that he was so cruelly killed.”

Sir David was horrifically killed on Friday when meeting constituents in Leigh-on-Sea.

The MP of 38 years was holding one of his regular surgeries to help deal with the issues and concerns of voters when he was stabbed multiple times.

Despite receiving medical attention, he died at the scene.

Mr Johnson told the Commons: “The passing of 72 hours has done little to numb the shock and sadness we all felt when we heard of the tragic and senseless death of Sir David Amess.

“This House has lost a steadfast servant, we’ve lost a dear friend and colleague, and Julia and her children have lost a loving husband and devoted father.

“Nothing I or anyone else can say can lessen the pain, the grief, the anger they must feel at this darkest of times.”

A 25-year-old man has been arrested on suspicion of murder and police are treating the attack as a potential terrorist incident.

Sir David’s death, just five years after Labour MP Jo Cox was murdered, has reignited a debate about the safety of politicians.

Over the weekend, Home Secretary Priti Patel said she was considering offering politicians protection to MPs when meeting members of the public.

“This isn’t a case of let’s wait for two weeks, three weeks, four weeks; these are immediate protective measures,” she told Sky News.

“We need to close any gaps, basically, where we feel that there are concerns.”

After tributes in the Commons there will be a procession to St. Margaret’s Church for a service of remembrance for the father of five.