Tory MPs are understood to be looking to get rid of Prime Minister Boris Johnson before the next General Election in 2024 as they grow increasingly frustrated at his approach to the coronavirus crisis, which has left behind a crippled UK economy. Critics have accused Mr Johnson of being “obsessed” with Brexit and therefore not well equipped to deal with coronavirus as he reaches his 12-month milestone on Friday.

One Tory MP told The Guardian: “If the economic downturn and the fallout from an inquiry into the pandemic put the party into freefall, some have even begun to think Johnson may need to be replaced before the next election.

“The party has no emotional attachment to Boris because he does not give us something to believe in, apart from as a vehicle for power.

“So a year out, if the polls look bad, it could happen.” 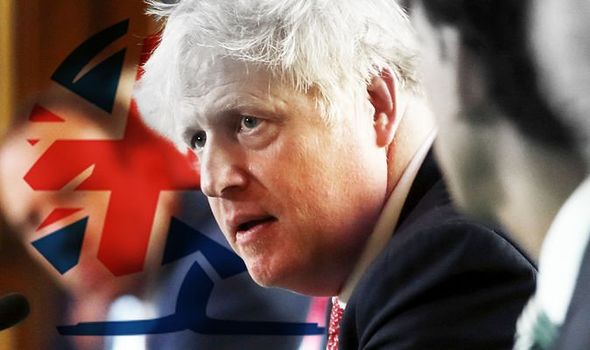 One former Cabinet minister said: “The hard facts are that Boris is a good-time prime minister.

“His grip on detail is shocking.”

Of Mr Johnson’s record on the COVID-19 crisis, another Tory MP added: “I think Boris has shown in the first year that the government and the team in No 10 is obsessed – and obsessed isn’t too strong a word – with Brexit.

“And they were caught completely unprepared for COVID because they didn’t put together a government that had anything other than Brexit in mind.”

Mr Johnson’s first year in office has seen Brexit, a baby and a brush with death from coronavirus.

When he became prime minister on July 24 2019, his party was languishing in the polls and had not long suffered one of its worst ever performances at the ballot box, securing just 9 percent of the vote in elections to the European Parliament.

But almost immediately the Tories’ poll share began to rise, from an average of 29 percent in the week he became PM to the mid-30s by the autumn, before hitting the early 40s at the start of the general election campaign.

After winning 45 percent of votes in the UK on election day, Mr Johnson then led his party to even dizzier heights in the polls, until the Tories found themselves averaging as much as 52 percent in the early weeks of the coronavirus crisis.

Then it all changed. From mid-May the polls have tracked downwards, not anywhere close to the lows seen last summer, but enough for the Tories’ lead over Labour to drop to as little as four points.

Once Mr Johnson enjoyed a solid lead over his Labour rival Jeremy Corbyn, even when his own rating was negative.

But now it is the prime minister who finds himself trailing his opposite number.