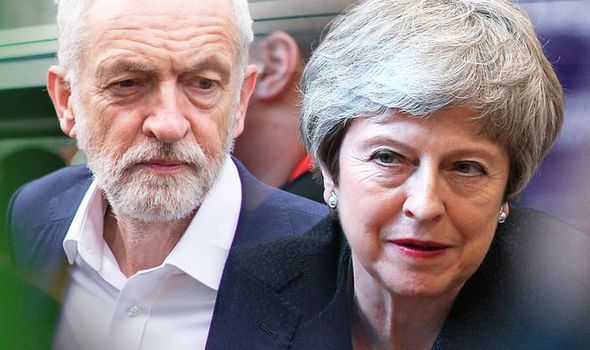 The announcement follows on from further crunch Brexit talks between the Prime Minister and Jeremy Corbyn tonight in order to break the Brexit impasse.Number 10 has stated the cross-party talks between Mrs May and Mr Corybn were “useful and constructive” but stopped short in confirming if Labour would back the deal or if any changes had been made to the bill agreed with Brussels. Mrs May’s withdrawal agreement has been defeated by the House of Commons of three occasions and the failure to deliver Brexit has resulted in the UK’s participation in the European Parliament elections on May 23 .

A Downing Street spokesman said: “This evening the Prime Minister met the Leader of the Opposition in the House of Commons to make clear our determination to bring the talks to a conclusion and deliver on the referendum result to leave the EU. “We will therefore be bringing forward the Withdrawal Agreement Bill in the week beginning the 3rd June.

“It is imperative we do so then if the UK is to leave the EU before the summer Parliamentary recess.

“Talks this evening between the Prime Minister and the Leader of the Opposition were both useful and constructive.”

Downing Street also confirmed talks with the opposition will continue tomorrow at an “official level” to ensure a “swift exit” from the bloc.

He added: “Tomorrow, talks will continue at an official level as we seek the stable majority in Parliament that will ensure the safe passage of the Withdrawal Agreement Bill and the UK’s swift exit from the EU.”

Earlier today during a marathon Cabinet meeting, ministers stated it was now an “imperative” for a Brexit deal to get through Parliament by the summer recess.

With Theresa May’s future linked to the passage of a Brexit deal, getting legislation through the Commons and Lords by the summer break could also pave the way for her departure from Number 10.

This is a breaking news story, more to follow