Barrie Deas has accused Mr Johnson of “caving in” to Brussels in a similar way to former Tory PM Ted Heath in 1973. Mr Deas suggested the agreement, published in full today, represented a capitulation when it came to quota shares, access to the UK 6-12 nautical mile limits, the time frame involved, regulatory autonomy and trade.

He said: “There will of course be an extensive public relations exercise to portray the deal as a fabulous victory, but it will inevitably be seen by the fishing industry as a defeat.

“There will be those at either end of the leave/remain spectrum in the “told you so” mould, but there was no inevitability about this outcome.

“The UK negotiating team fought hard and long – fishing was the last issue to be settled.

“But in the final stretch the decisions lay at the very top of government – with the Prime Minister – and he bottled it.

“Economics reasserted its dominance over politics.” 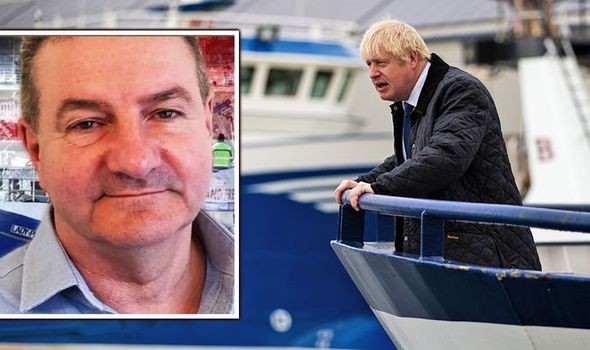 In terms of the deal’s implications for the quota of fish which British fishermen will get to keep in future, Mr Deas said: “Most coastal states allow something like 80% of their fisheries resources to be harvested by their own domestic fleets, with the balance being traded for other mutual benefits.

“Prior to this agreement the EU benefited disproportionately from free access to fish in UK waters and unbalanced quota shares agreed in 1983.

“What a ’25 percent rebalancing in value terms” actually means to individual fishing businesses and fishing communities will have to await publication of the detailed stock by stock schedules agreed.

“It is clear, however that it represents a fraction of what the UK has a right to under international law and what the government repeatedly said that it would secure on behalf of the UK fishing industry.”

He added: “Particular attention will focus on individual stocks where the UK’s quota shares have been obscenely out of line with zonal attachment.