Mr Verhofstadt – well-known for his caustic diatribes criticising the UK’s decision to quit, as well as his fiery clashes with former Brexit Party MEP Nigel Farage – has been appointed the chair of a seven-person delegation on the discussion forum, which is aimed at offering citizens a chance to shape how the EU will look in the future. The former Belgium Prime Minister had initially wanted to lead the conference on his own – but his appointment as chairman still puts him in an enormously influential position.

Ray Bassett, Ireland’s former ambassador to Canada, Jamaica and the Bahamas and well as being an ardent eurosceptic, tweeted: “Has the EU a death wish?

“Any possibility of taking the forthcoming Conference On the Future of Europe seriously has flown out the window with this eurofanatic’s involvement.”

Apart from his regular pronouncements on the floor of the European Parliament, Mr Verhofstadt also courted controversy during an appearance at the Liberal Democrat conference in 2019, when he held up a t-shirt saying” “B**s to Brexit.” 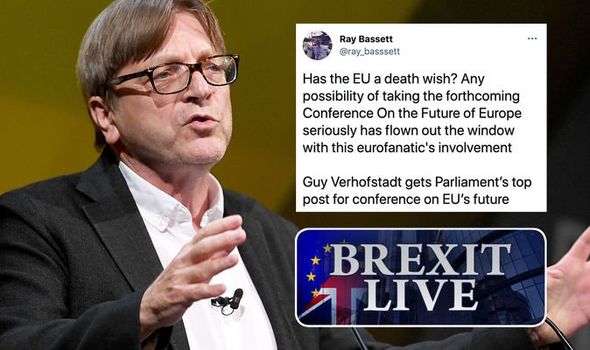 The delegation named by European Parliament President David Sassoli is also controversial because it features just one woman.

On March 10, Mr Sassoli had written to political group leaders urging them to include more women in their nominations.

He wrote: “I am deeply concerned that only days after the International Women’s Day, we are not able to live up to the very principles that we claim we defend, especially in the context of the future of Europe.”

The EU publishes data for average monthly earnings every four years, with the latest set based on figures from 2018.

Facts4EU editor-in-chief, Leigh Evans, said: “In this case, it is clear that any pretence from the EU that its actions against the UK are in some way founded on a desire for ‘fairness’ and a ‘level playing field’ are nonsense.