Mr Gauke is one of a number of Ministers who are advocating a customs union with the EU, and he and other Remainers are likely to tender their resignations if Mrs May opts for a hard Brexit. However, if the beleaguered Prime Minister caves in to their demands for a soft Brexit, she will trigger a similar rebellion among the Brexiteers in her cabinet, with Andrea Leadsom and Michael Gove among those ready to walk. Tonight Downing Street responded to Mr Gauke by saying its Brexit plans “do not include membership of the customs union”. 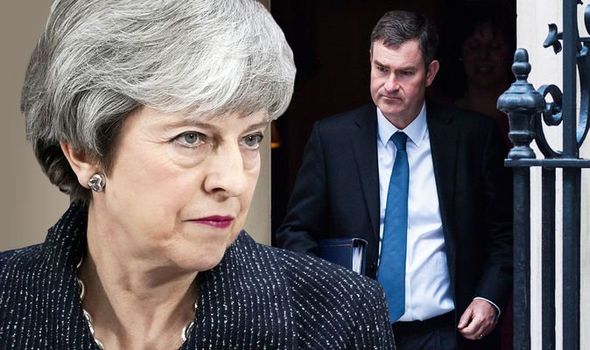 Speaking on behalf of the Conservative Party’s Remainers, Mr Gauke told told the BBC’s Andrew Marr ‘we would have to consider very closely what parliament decides to do’.

He added: ‘I would rather leave the customs union but we also have to recognise that my party does not have the votes to get the manifesto commitment through the Commons. Sometimes you have to accept your second or third choice.”

Pressed as to whether he would resign if Mrs May explicitly ignored Parliament and switched to No Deal, he said: “I just don’t think the British people would thank us if we left without a deal and we said we were just following the referendum result.”

On the other hand, Mrs May has been sent letter demanding the UK leaves the EU on April 12 ‘with or without a deal’ which is thought to have been signed by Mrs Leadsom and Mr Gove, along with Home Secretary Sajid Javid and Foreign Secretary Jeremy Hunt.

(SCROLL DOWN FOR LIVE UPDATES)

EasyJet said it was set to rack up a £275 million loss for the first half of its financial year, in line with earlier guidance, while expecting revenue for the six months ended March to grow 7.3 percent to about 2.34 billion pounds.

However, revenue per seat at constant currency is expected to have declined by about 7.4 percent and the company said it was seeing weakness in ticket yields across Europe, in contrast to guidance last November.

Chief Executive Officer Johan Lundgren said: “For the second half, we are seeing softness in both the UK and Europe, which we believe comes from macroeconomic uncertainty and many unanswered questions surrounding Brexit.”

9.02am update: Queen could be dragged into Brexit wrangling, warn lawyers

The extraordinary gridlock over the issue could even see the Queen dragged into the Brexit chaos, two constitutional experts have warned.

MPs will today stage a number of indicative votes to try and establish a way forward, and could even go over the heads of the Government with an Act of Parliament aimed at providing a resolution.

However, the paper published by Stephen Laws QC and Professor Richard Ekins for the Policy Exchange think tank suggested the Government could effectively veto this by asking the Queen not to sign it/

Blaming “rogue Speaker” John Bercow and “unprincipled” MPs, they added: “The process of Royal Assent has become a formality but if legislation would otherwise be passed by an abuse of constitutional process and principle facilitated by a rogue Speaker, the Government might plausibly decide to advise Her Majesty not to assent to the Bill in question: it would be MPs, not the Government, that had by unprincipled action involved the monarch.” 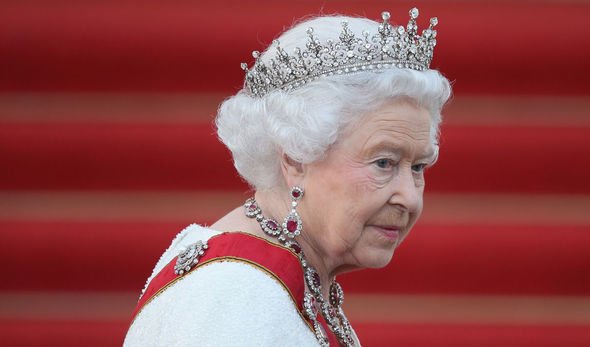 With MPs planning for another round of indicative votes in an effort to find a way forward with Brexit, EU officials have accused them of being “detached from reality” – and warned the choice comes down to Theresa May’s deal or a lengthy delay to the process of leaving the EU.

MPs will consider rival options including the idea of staying in a customs union with the bloc, and a so-called Common Market 2.0.

But diplomats have said Mrs May’s deal is non-negotiable, and with the UK’s exit currently scheduled for April 12, they have warned rival plans would not excuse Britain from taking part in elections to the European Parliament, scheduled for May 23-26.

One official told the Financial Times: “The discussion in London seems as always a bit detached from how the reality looks in EU27 capitals. The withdrawal agreement is closed. Time is running out.”

European Commission President Jean-Claude Juncker has piled more pressure on Prime Minister Theresa May by warning her he is “losing patience” with Britain over ongoing Brexit delays.

Interviewed on Italian television, Mr Juncker urged MPs to agree on a way forward in the next few days, with Britain facing a hard deadline on April 12.

He said: “We have had a lot of patience with our British friends but patience is coming to an end

“So far we know what the British parliament says no to, but we don’t know what it might say yes to.”

Asked about the possibility of a second referendum, Mr Juncker said that was an issue exclusively for the British people.

The Conservative Party’s chief whip has launched a broadside against the Government, claiming Theresa May of failing to recognise the “inevitability” of a softer Brexit in the wake of her 2017 general election setback.

The attack comes as MPs prepare for another round of indicative votes today on options to resolve the deadlock.

Mr Smith described ministers “sitting around the cabinet table trying to destabilise Mrs May”, describing their behaviour as the “worst example of ill-discipline in cabinet in British political history”.

In the wake of Mrs May losing her overall majority two years ago, he added: “The government as a whole probably should have just been clearer on the consequences of that. The Parliamentary arithmetic would mean that this would be inevitably a kind of softer type of Brexit.”

The Brexit Storm: Laura Kuenssberg’s Inside Story is on BBC2 tonight at 9pm 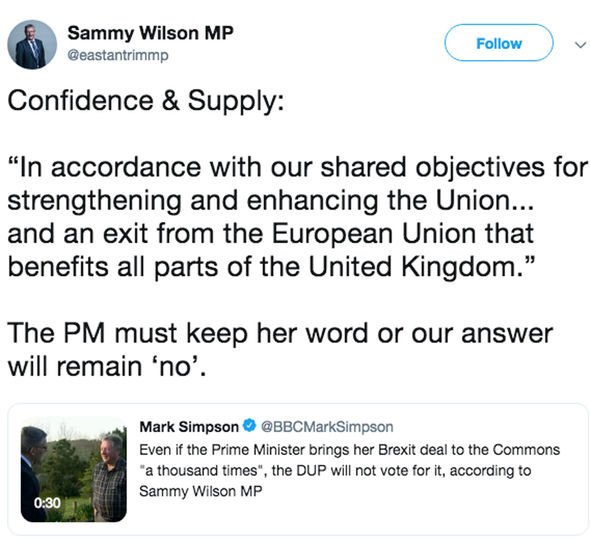 8.05am update: DUP will NEVER back May’s plan, warns Wilson

DUP Brexit spokesman Sammy Wilson has warned Theresa May his party will NEVER vote for her withdrawal agreement in its current form.

Mr Wilson tweeted after warning the BBC’s Mark Simpson the DUP would not back Mrs May if she asked them “a thousand times”.

He quoted an excerpt from the Government’s “confidence and supply” arrangement by which the DUP props up Mrs May’s Government, which states: “In accordance with our shared objectives for strengthening and enhancing the Union and an exit from the European Union that benefits all parts of the United Kingdom.”

Mr Wilson commented: “The PM must keep her word or our answer will remain ‘no’.”

A petition aimed at forcing the cancellation of Brexit by revoking Article 50 has passed the six-million signature mark.

The Revoke Article 50 petition – which is to be debated by MPs today – has the highest number of signatures of any parliamentary e-petition in history.

After it was launched on the Parliamentary website, its popularity was such that the website crashed as it struggled to process almost 2,000 signatures a minute.

Article 50 is the process which was used to trigger Brexit and give the country two years to negotiate an agreement – a period which ended on Friday without such a deal being ratified.