The UK today enters a pivotal week for Brexit, as negotiations with the EU reach their final phase. But Mr Johnson is said to be considering triggering a no deal Brexit as he grows increasingly frustrated at the Brussels bloc refusal to give up on its demands.

The news comes after Downing Street signalled Mr Johnson was running out of patience and could be heading towards a no deal Brexit – similar to Australia’s relationship with the EU.

A Government source said: “We do need to urgently make progress on these issues or it will end up an Australia-style deal.

“There is momentum and there is a strong desire on both sides to do a deal but is going to be hard work for Lord Frost this week.” 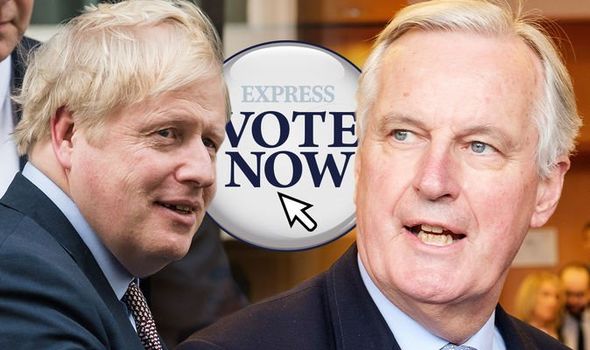 This morning, Health Secretary Matt Hancock hinted at the breakdown, saying the UK was preparing for any outcome because the nation’s red lines have not changed.

Talks on a future trading relationship between the UK and EU post-Brexit will continue this week as the clock continues to tick until the end of the transition period.

Lord David Frost is in Brussels for another round of negotiations ahead of a European Council video summit on Thursday which has been touted as a deadline for a draft deal.

The UK formally left the EU in January but will continue to follow the bloc’s regulations until the end of the year – just over six weeks away.

If no agreement is in place at the end of December, goods travelling between the two parties will be subject to tariffs set out by the World Trade Organisation.

The main sticking points include an ongoing row over fishing rights, how any deal between the two parties would be governed, and the “level playing field” measures aimed at preventing unfair competition on issues including state subsidies.

Speaking ahead of the talks this week, the UK’s chief Brexit negotiator Lord Frost said there had been progress in a “positive direction” in recent days.

However, he warned talks may not succeed and reiterated the point made by Mr Johnson that the country must be prepared for a departure with a deal or without.

Deadlines imposed on a future agreement have proven to be soft in the past, with Mr Johnson saying in September: “There needs to be an agreement with our European friends by the time of the European Council on October 15 if it’s going to be in force by the end of the year.

“If we can’t agree by then, then I do not see that there will be a free trade agreement between us, and we should both accept that and move on.”

The mid-October deadline appeared to be scrapped at the start of that month, when Downing Street and European Commission president Ursula von der Leyen agreed to intensify talks during a video conference call, acknowledging “significant gaps remained” between the UK and Brussels.

Any deal struck would be subject to ratification by EU member states, the European Parliament and the UK Parliament meaning time is tight.

The agenda for Thursday’s meeting of 27 European leaders does not mention Brexit, with the response to the Covid-19 pandemic instead taking centre stage.

But with only one other meeting – between 10-11 December – scheduled before the end date of the transition period, they could be seen as a key moment in the shaping of the UK’s departure.