Boris Johnson’s official spokesman has warned “time is in short supply” to reach a post-Brexit trade deal as the Prime Minister’s deadline to clinch an agreement by tomorrow looms. But the EU’s chief Brexit negotiator Michel Barnier appeared to snub Mr Johnson’s October 15 deadline when he vowed to work on a trade deal over the “coming days and weeks”.

Express.co.uk is asking our reader whether Mr Johnson should quit talks today? Answer in our poll below.

Despite Mr Johnson’s demands to seal a deal by tomorrow ahead of the EU summit, Express.co.uk understands talks will progress over the next few weeks before November 3 when a legal text should be ratified.

Mr Barnier and the UK’s chief Brexit negotiator David First could announce a “deal in principle or a pathway to a deal” on Thursday and will continue with talks until a legal text is drafted. 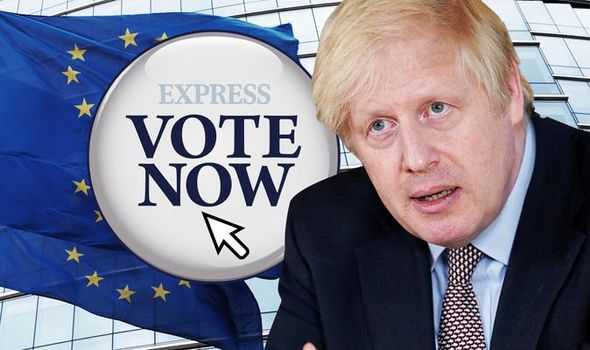 It comes after Mr Johnson said the UK should have “no fear” about the prospect of a no deal Brexit.

Downing Street said Mr Johnson had told his Cabinet that trade negotiations with the EU are at “a crucial stage” but he believes a deal can still be done.

The Prime Minister’s official spokesman said: “The PM also updated Cabinet on the negotiations with the EU, which he said were at a crucial stage ahead of the European Council later this week.

“The PM said Lord Frost is currently in Brussels seeking to find a way through, and he believed there is still a deal to be done.

“The PM reiterated that, while we want a deal on the right terms, if we can’t get there we are ready and willing to move forward with an Australian-style outcome, which holds no fear.”

Asked about Mr Barnier’s suggestion that talks would continue in the coming weeks, the spokesman restated the UK’s desire for progress by the European Council summit on Thursday.

He added: “There is a need for us to provide clarity in the middle of this month.”

It comes as leaked European Council conclusions revealed the Brussels bloc will ramp up its preparations for a no-deal Brexit.

EU members say there is a “concern that progress on the key issues of interest to the Union is still not sufficient for an agreement to be reached”.

In a draft version of an EU leadership statement, they say: “The European Council reaffirmed the Union’s determination to have as close as possible a partnership with the United Kingdom on the basis of the negotiating directives of February 29, 2020.

“Against this background, the European Council invited the Union’s chief negotiator to intensify negotiations with the aim of ensuring that an agreement can be applied from January 1, 2021.”

An ex-Royal Navy Officer has been stripped of his MBE from the Queen for conning his stepson out of his inheritance fund. The former officer…

What do No 10’s coronavirus graphs REALLY show? School children and twenty-somethings have driven England’s current Covid-19 outbreak – but infection rates among them are…