Lee Anderson says he’ll ‘take no lectures from the left’

This is your chance to grill one of the most prominent Conservative MPs of the 2019 intake on the issues that matter to you. Want to find out Lee Anderson’s views on where we are with Brexit? Boris Johnson’s political future? Whether taxes need to be reduced? – whatever it is, let us know and he’ll give you his opinion.

An ex-coal miner, Lee Anderson was elected as the MP for Ashfield in Nottinghamshire in 2019.

He became the first Conservative to represent the constituency since 1977.

He took over from Labour’s Gloria De Piero, who he had previously worked for as an office manager before he defected to the Conservatives in 2018 in protest at the take-over of the far-left.

As a staunch Brexiteer, since being an MP he has campaigned to make the most of the UK’s opportunities outside of the EU and has gone viral on social media on multiple occasions after standing up to pro-EU campaigner Steve Bracy outside parliament.

What would you like to ask? Have your say in the comments section. 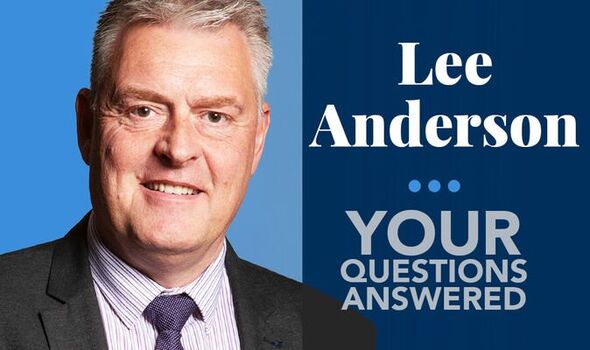 Mr Anderson made headlines earlier this year when he controversially claimed there wasn’t “massive use for food banks” in the UK and their use tended to relate to a lack of budgeting and cooking skills.

He has pushed the Government to do more to reduce the number of illegal migrants crossing the English Channel, and vowed to boycott England matches at last year’s Euros in protest at the team taking the knee before kick-off.

Mr Anderson is a vocal supporter of Boris Johnson and backed him in last month’s confidence vote.

So, do you have a question for our politician of the week? Let us know in the comments section. Answers to the best queries will be published next week.

What would you like to ask? Have your say in the comments section.