“The nation and the world are in peril,” the president said during a stop in a hard-hit borough of New York City. “And that’s not hyperbole. That is a fact.” 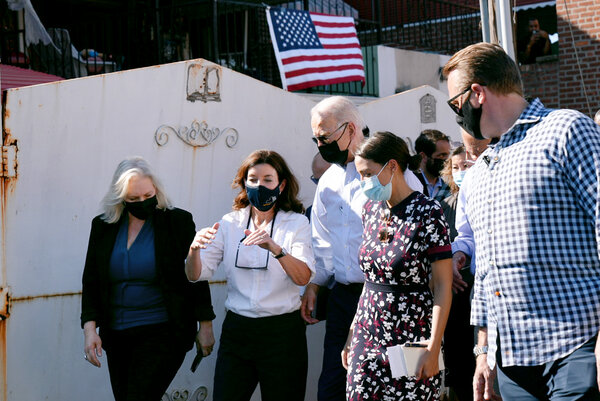 By Katie Rogers and Juliet Macur

President Biden warned Americans on Tuesday that Hurricane Ida’s lethal destruction was the sure sign of a nation and world “in peril” from climate change and said drastic action would be needed to prevent extreme weather patterns from worsening.

“They all tell us this is code red,” Mr. Biden said from a neighborhood in Queens, referencing scientific research that suggests a growing number of Americans are vulnerable to extreme weather events. “The nation and the world are in peril. And that’s not hyperbole. That is a fact.”

A trip through storm-battered areas of New Jersey and New York City gave Mr. Biden an opportunity to show his commitment to the federal government’s storm response and to build support for an infrastructure package that he has promised would help safeguard against future storms. While he was traveling, the White House sent Congress an urgent funding request for $14 billion to aid recovery from natural disasters that occurred before Hurricane Ida and to avert a government shutdown on Oct. 1.

Flanked by a number of Democratic politicians from New York, including Senator Chuck Schumer, the Senate majority leader, Senator Kirsten Gillibrand and Gov. Kathy Hochul, Mr. Biden said in Queens that the bipartisan deal would include investments to repair roads, pipes and bridges but would also include money to provide jobs that he said could ultimately make the country more climate-resistant.

“Climate change poses an existential threat to our lives, our economy, and the threat is here,” he said. “It’s not going to get any better. The question is: Can it get worse?”

The $1 trillion piece of legislation he was there to promote was passed by the Senate in early August and still must pass the House, but if enacted, it will touch nearly every facet of the American economy and fortify the nation’s response to the planet’s warming. The $3.5 trillion budget plan Mr. Biden has proposed would go even further in fighting climate change but would require the support of all 50 Senate Democrats and more moderate members of the House.

But the White House indicated that more money would be needed on a faster time frame. The urgent request for funding sent to Congress on Tuesday forecast that billions more would be necessary to respond to Hurricane Ida and also included $6.4 billion to assist the processing of Afghan overseas and in the United States.

President Biden visited New York and New Jersey to assess damage from the remnants of Hurricane Ida. Mr. Biden said the threat of climate change should be considered in how to rebuild after the storm.

The losses that we witnessed today are profound. Dozens of lost lives, homes destroyed in Manville — including by gas leaks triggered by the flooding — damaged infrastructure, including the rail system. And my thoughts are with all those families affected by the storms and all those families who lost someone they loved. For decades, scientists have warned of extreme weather and it would be more extreme. And climate change was here, and we’re living through it now. We don’t have any more time. I mean, every part of the country, every part of the country is getting hit by extreme weather, and we’re now living in real time what the country’s going to look like. And if we don’t do something — we can’t turn it back very much, but we can prevent it from getting worse. And so we’re all in this together, and we’ve got to make sure that we don’t leave any community behind — and it’s all across the country. And we’re going to build back, realizing what the status of the climate is now, what the trajectory of it is going to be. And we can no longer — we all know we can’t just build back to what it was before. Whatever damage done in New Jersey, you can’t build back and restore what it was before because another tornado, another 10 inches of rain, is going to produce the same kind of results. 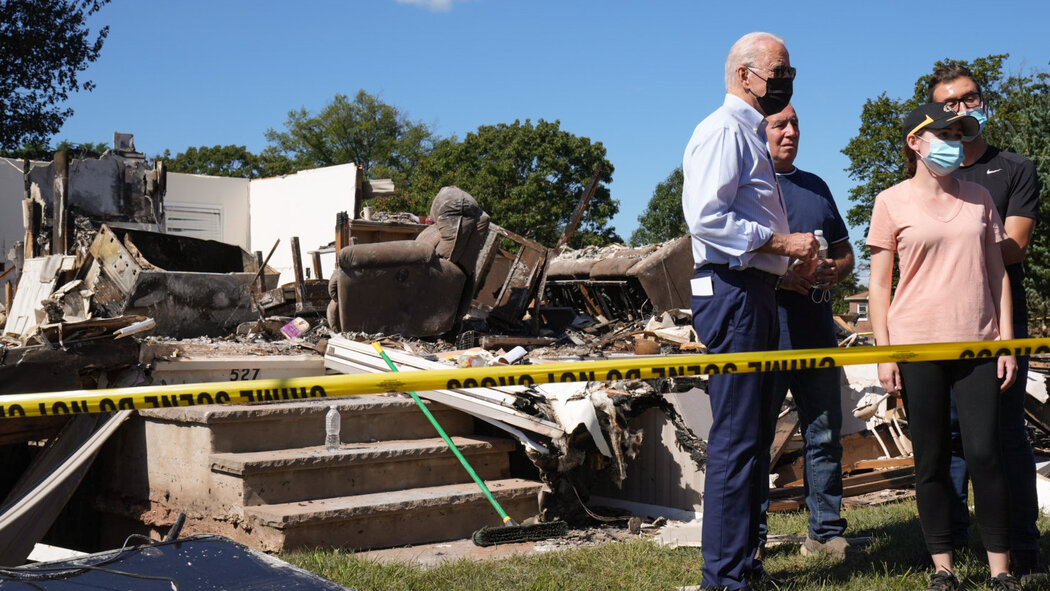 Mr. Biden’s first stop of the day was New Jersey, where he traveled with Gov. Phil Murphy to an emergency management training center and a neighborhood in Manville, in Somerset County, where floodwaters last week caused explosions and fires in buildings. Ida killed at least 27 people in New Jersey — more fatalities than in any other state — and four people remain missing. Mr. Biden’s trip came four days after he visited Louisiana to survey damage from the hurricane there.

As the president made his way from the airport into Manville, his motorcade passed the still-smoldering remains of Saffron Banquet Hall, a building that exploded early Friday morning after being nearly swallowed by floodwaters. The banquet hall’s sign was still standing, but crooked, with a torn “Grand Opening” banner hanging from it. Nearby, a spray-painted sign held up by police tape read, “Help Manville Recover.”