The former Labour leader was suspended from the party and lost the party whip last month over his comments made in response to a damning anti-semitsm inquiry. Following the publication of the report, Mr Corbyn said he did not accept many of the findings, and claimed the anti-Semitism problem within the party had been “dramatically overstated” for political reasons. But the MP has now released a statement to “clear up any confusion”, where he rowed back on his previous comments.

Writing on Facebook, Mr Corbyn said he issued the following statement to the party “to clear up any confusion about what I had meant”.

He said: “Last month, I was suspended from the Labour Party, after 54 years’ membership and four and a half years as party leader.

“On the day I was suspended I gave a broadcast interview to clarify what I had said in response to the EHRC report, and I also made a statement to the party to clear up any confusion about what I had meant.”

The former Labour leader then shared the following statement: “The publication of the EHRC report should have been a moment for the Labour Party to come together in a determination to address the shortcomings of the past and work as one to root out antisemitism in our own ranks and wider society. 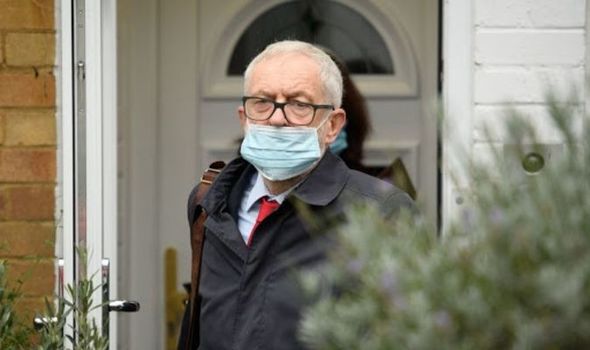 “We must never tolerate antisemitism or belittle concerns about it. And that was not my intention in anything I said this week. I regret the pain this issue has caused the Jewish community and would wish to do nothing that would exacerbate or prolong it.

“To be clear, concerns about antisemitism are neither “exaggerated” nor “overstated”. The point I wished to make was that the vast majority of Labour Party members were and remain committed anti-racists deeply opposed to antisemitism.

“I fully support Keir Starmer’s decision to accept all the EHRC recommendations in full and, in accordance with my own lifelong convictions, will do what I can to help the Party move on, united against antisemitism which has been responsible for so many of history’s greatest crimes against humanity.”