COLUMBIA, S.C. — Senator Cory Booker has for months been looking for his breakout moment, the opportunity to stand out from the sprawling Democratic presidential field, go viral online, and reap the benefits in the polls and with a surge of new contributors.

And for a moment last week, it seemed as if he had found it: After he condemned Joseph R. Biden Jr. for waxing nostalgic about forging policy in a Senate that included segregationists, Mr. Booker quickly sent out fund-raising emails, offered an impassioned critique in a prime-time cable interview and found Google searches for his name soaring.

But by the weekend, Mr. Booker was backing off — praising the former vice president — and his campaign manager was forcefully yanking him away from reporters who were pressing him on his critique of Mr. Biden.

As Mr. Booker heads into the first primary debate on Wednesday, his attack and retreat with Mr. Biden demonstrated why his candidacy carries so much promise but has yet to find traction.

[Check out the lineups for the debates here.]

There have been breakout sensations, profound disappointments and examples of gritty resilience in the Democratic primary, but no candidate to date has been as simply confounding as the New Jersey senator, who has been sized up as presidential timber since he entered politics two decades ago. And few other contenders are under as much pressure to distinguish themselves at this debate, and the one next month, as he is.

Mr. Booker is more comfortable “leading with love,” as he often says in speeches, and he warns against “fighting fire with fire” when it comes to confronting President Trump.

It’s an approach that could pay off with Democratic primary voters, who surveys indicate are far more eager to find a candidate who wants to unite the country than merely fight against Republicans.

But it does not make for cable television or social media catnip, which has shaped the early contours of the race.

“It’s the opposite of viral,” said Jeff Link, a longtime Iowa Democratic strategist. “His message is totally different.”

This strategy has so far obscured Mr. Booker’s considerable attributes. He is a gifted orator, has a glittering résumé and enjoys longstanding ties to some of the most deep-pocketed donors in his party, yet he is stagnant so far in the polls. No other Democratic candidate but him has such a sophisticated organization and support network in Iowa, New Hampshire and South Carolina but is mired closer to zero than double digits in most every early nominating state.

Mr. Booker said he was not discouraged. “People who are usually polling this far down don’t succeed in winning the nomination but I think we’re going to do it,” he said in an interview Saturday, adding: “When people hear my message they convert.” 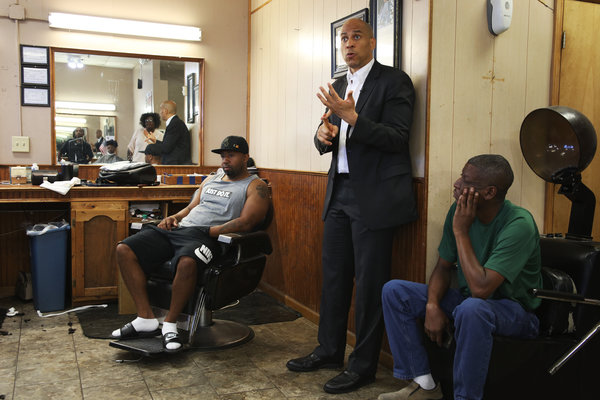 [Sign up for our politics newsletter and join the conversation around the 2020 presidential race.]

His pitch is less ideological or policy heavy than it is almost spiritual. Mr. Booker is rarely more passionate than when he speaks to the importance of bringing people together and invoking what the Civil Rights movement called “the beloved community.”

“We didn’t beat Bull Connor in Birmingham by bringing bigger dogs and bigger fire hoses,” he told a handful of nodding employees and patrons at a black barber shop here on Saturday.

But while Mr. Booker’s speeches can often soar, he can just as easily lapse into a New Age, self-help style that’s more reminiscent of Tony Robbins than, say, Barack Obama.

What’s more, running as an agent of love can prove difficult when one has ground to make up in a primary and targeting rivals may be the best way to do it.

And nowhere were these competing demands on display more than in the contretemps with Mr. Biden.

In the interview, Mr. Booker targeted Mr. Biden with a new and direct ferocity. He argued that black voters should demand answers from the former vice president on issues including his 1970s opposition to busing and the tough-on-crime legislation he wrote in the 1990s, as well as his use of the word “boy” last week in recalling what the segregationists he served with called him.

[Find the latest data and analysis to keep track of who’s leading the race to be the Democratic nominee.]

Yet even as he voiced this indictment of Mr. Biden, he softened it on the front and back end.

“I love the guy,” he said after recounting what he said was a very positive telephone conversation with Mr. Biden last week.

And after laying out his bill of particulars, Mr. Booker was quick to add of the former vice president: “Doesn’t mean we don’t love and respect him.”

His supporters have tried to put the best face on his early difficulties, but they recognize that he must use the debate Wednesday and then the one in July to stand out from the field.

“It’s not as great as I would have hoped at this point, and I’m sure that Cory feels the same way,” said Tracy Higgins, a Booker donor based in New Jersey who is planning to host a fund-raiser for him this fall. “But it’s tough with so many candidates, and I think that for Cory, he’s not yet really been able to make his more specific case about ‘why him.’ The debate can certainly present that opportunity.”

Mr. Booker’s campaign is invested in a slow-and-steady strategy, as captured by his “brick by brick” ethos and hashtag, and they point more to how many voters in surveys say they are open to supporting him.

But his advisers concede that a memorable debate performance would help with fund-raising at the end of a quarter in which he is expected to be outraised by most of the top-tier contenders. As a candidate who has relied mostly on big-dollar events, it could also help boost him past the 130,000 unique-donor threshold necessary to qualify for the third debate in September.

According to fund-raising emails sent by Mr. Booker’s campaign, he recently crossed the 85,000 donor mark, still well short of the cutoff. As he battles to earn online donors, his campaign is also turning to their more tried-and-true event-based fund-raising, holding $10 “hometown happy hours” to get new small donors on the books.

Mr. Booker has received what could be a favorable draw in the debate: Despite his standing in the polls, he will be center stage on Wednesday directly next to Senator Elizabeth Warren, who has distinguished herself in this race with a series of policy proposals. That placement will offer Mr. Booker the chance to demonstrate his own fluency on the issues while also letting him draw contrasts in tone with the more populist Massachusetts senator.

On Saturday, he pointed to the solid reviews he has gotten at recent joint-candidate forums.

“Most of the time that we’ve had all the candidates coming together we tend to do very well,” he said.

In his debate preparations, Mr. Booker’s advisers have been cautioning him from indulging his flair for dramatic oratory. As he has demonstrated in televised Judiciary Committee hearings, as well as in fire-and-brimstone speeches in modest living rooms, he does not always have the best intuition for how to modulate his rhetoric. Mr. Booker’s aides have counseled him: Seize the moments if they come, but don’t go hunting for them.

More broadly, they view the debate as their best chance yet to introduce Mr. Booker to the country.

He has long been a familiar name in the political cognoscenti (long enough so that the old saw about a person who manages to be “a rising star in three different decades” has been applied to him).

But Mr. Booker is still only marginally familiar to many rank-and-file Democratic primary voters. A CNN-Des Moines Register poll of Iowa voters from earlier this month found that 26 percent still did not have an opinion of Mr. Booker.

“He is a new face for most Americans,” said Jim Demers, a New Hampshire Democrat and Booker supporter. “The challenge he faces is no different than most of the candidates and that is name recognition.”

Mr. Booker has never made a secret of his political ambitions, dating to when he let a documentary crew follow him around when he first ran for Newark mayor in 2002. But the former Stanford tight end now finds himself in the same position as an N.F.L. team that does not fully control its own playoff destiny, and needs other teams to lose to gain a berth. Mr. Booker needs a bit of luck to rise to contention.

That could mean that Mr. Biden begins to fade and that Senator Kamala Harris fails to catch fire, or it could be that Democratic voters have second thoughts about nominating a progressive like Ms. Warren or Senator Bernie Sanders.

“If he can hang in there and as some people drop off — and the people that drop off are basically the ones that are taking from his base — I think he can make a push,” said Doug Palmer, the former Trenton mayor who hosted a fund-raiser for Mr. Booker this month.

Or, as Mr. Link, the Iowa strategist, put it: “They are building a real organization and they are going to be in a position to take advantage of a break if it comes their way — and now it’s a question of does he get his moment.”