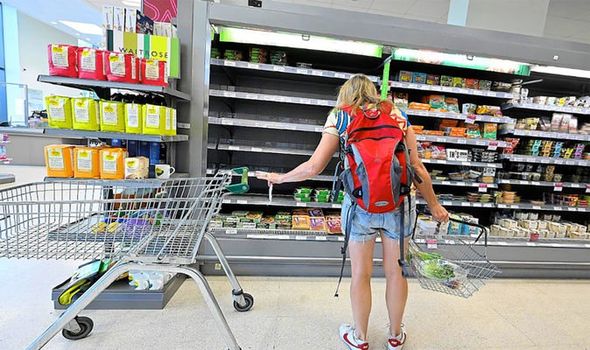 A carbon dioxide shortage threatens to affect stock on supermarket shelves. Britain’s supply chain is already creaking from an acute shortage of lorry drivers and the impact of Covid.

The Government last night said it was monitoring things “closely” as concerns grew over the latest disruption, worsening the situation in the run-up to Christmas.

Business Secretary Kwasi Kwarteng was due to meet with officials yesterday to discuss the situation.

A Government spokesman said: “We are monitoring this situation closely and are in regular contact with the food and farming organisations and industry, to help them manage the current situation.

“The UK benefits from having access to highly diverse sources of gas supply to ensure households, businesses and heavy industry get the energy they need at a fair price.”

The Government last week responded to the ongoing disruption by setting up a cross-departmental group “to monitor labour supply chains”.

Nick Allen, chief executive of the British Meat Processors Association, said: “This could be the straw that broke the camel’s back.

“It is potentially a massive challenge for the food industry at a time when we are already facing huge issues.”

One retail source said: “This is off-the-clock big – it has an impact on everything.”

The latest problems have been caused by the knock-on effects of rising wholesale gas prices.

They have caused two factories that produce CO2 used by the food industry to suspend operations, meaning Britain’s supplies have been cut by 60 percent.

Meat processors have already been struggling with a shortage of lorry drivers and recruitment problems.

But now they face fresh challenges with not having enough of the gas, which is used to stun pigs and chickens prior to slaughtering.

It it also used in the plastic packaging process, to create dry ice to transport chilled food and in the production of beer and soft drinks.

The British Poultry Council’s Richard Griffiths warned that the industry was rapidly heading into a “downward spiral”. He said: “After five to seven days we’ll start to see significant problems in processing birds.

“If CO2 supplies become tighter and more unpredictable, then supply chains will have to slow down. No CO2 means no throughput.”

The carbon dioxide used by the meat industry is a by-product of fertiliser production.

But fertiliser producers have been struggling with natural gas prices that are at record highs as economies around the world begin to recover from the Covid crisis. In the UK, lower winds have meant less renewable energy is generated.

There have been outages at some nuclear stations and lower flows into the UK of natural gas from Norway, pushing up prices further.

This week, two large UK fertiliser factories owned by US firm CF Industries Holdings suspended operations due to the soaring prices. Yesterday, Norwegian firm Yara said it would also cut production at a number of its European plants. The closure of the two CF Industries plants, located in Durham and Cheshire, has cut 60 percent of the UK’s food-grade carbon dioxide supply, according to the British Meat Processors Association.

It is unclear how much carbon dioxide abattoirs and other food factories have stored.

Without it, the slaughtering process of pigs and chickens cannot go ahead.

The remaining UK carbon dioxide production is being prioritised for the NHS for medical uses, and for the nuclear industry, which uses it as a coolant.

Meanwhile, fast-track lorry driving tests are also being rolled out in a desperate attempt to keep supplies flowing.

In a bid to ease the crisis before Christmas, car drivers will no longer need to take another test to tow a trailer or caravan, thus allowing around 30,000 more HGV driving tests every year.

Tests will be made shorter by removing the reversing exercise.

It will also be made quicker to obtain a licence to drive an articulated vehicle, without first having to get one for a smaller vehicle.