Democrats proposed a spending bill that omitted aid for farmers sought by President Trump, drawing Republican ire and leaving the fate of the bill unclear as federal funding is set to lapse. 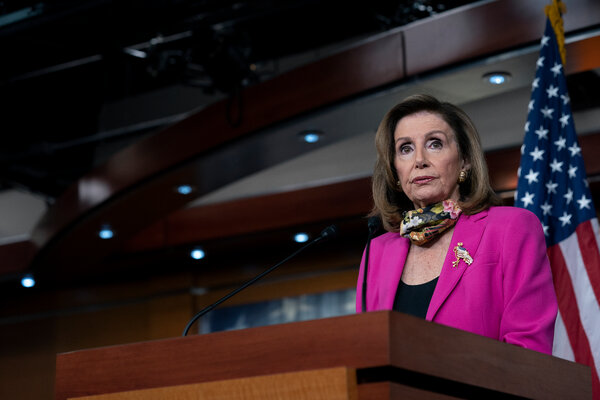 WASHINGTON — Congressional leaders clashed on Monday over a stopgap spending bill to stave off a government shutdown at the end of the month, as Democrats put forth a measure that omitted billions of dollars in additional relief that President Trump had promised for farmers battered by his trade policies and the coronavirus pandemic.

The dispute, which came as Republicans and Democrats had been nearing a bipartisan deal on the measure, could jeopardize efforts to cement an agreement to avert a lapse in government funding when the fiscal year ends on Sept. 30. Lawmakers have less than a week of scheduled work days remaining to reach a deal before they are slated to depart Washington for the final phase of their re-election campaigns.

The snag emerged after Democrats balked at including additional money in the package for the Commodity Credit Corporation, arguing privately that Mr. Trump was seeking to use it as a personal piggy bank to reward a politically powerful constituency weeks before Election Day.

The looming fight over filling the Supreme Court vacancy left by Justice Ruth Bader Ginsburg’s death has escalated partisan tensions on Capitol Hill, leaving the chances of a quick resolution unclear. The House is expected to vote on the legislation as early as Tuesday, but Republicans signaled that they might not accept it without the aid for farmers.

“House Democrats’ rough draft of a government funding bill shamefully leaves out key relief and support that American farmers need,” said Senator Mitch McConnell of Kentucky, the majority leader. “This is no time to add insult to injury and defund help for farmers and rural America.”