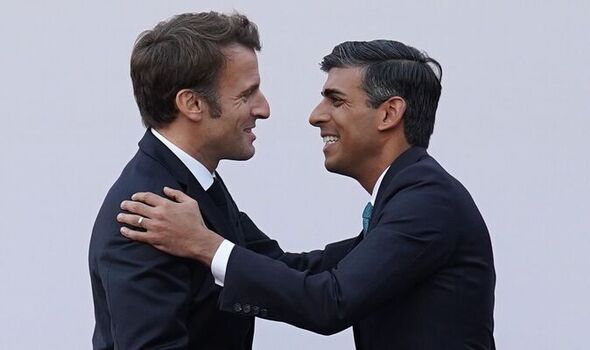 A grinning Emmanuel Macron looked delighted to have swerved a meeting with Liz Truss today as he warmly embraced her successor, Rishi Sunak.

The new Prime Minister met with his French counterpart on the sidelines of the COP27 climate change summit in Egypt.

“Very nice to see you,” Mr Sunak told Mr Macron as he greeted him for the first time face-to-face since entering No10.

“Lots for us to talk about, right?” he added as the pair readied for a full bilateral meeting.

Tension overshadowed the short-lived relationship between the former occupant of No10 and French President after the ex-Conservative leader said the “jury’s out” on whether Mr Macron was a friend or foe to Britain.

Posing for pictures at the United Nations headquarters, Mr Macron appeared to force a smile as he shook the hand of Ms Truss.

Mr Sunak and the French President discussed tackling small-boat crossings in the Channel as the number of arrivals on UK shores continues to grow.

More than 38,000 migrants have made the treacherous crossing in small boats so far in 2022 – a record number with almost two months of the year still to go.

Government figures also indicate that since 2018 75,000 people have entered Britain after taking a chance on crossing the Channel in unsuitable rubber dinghies.