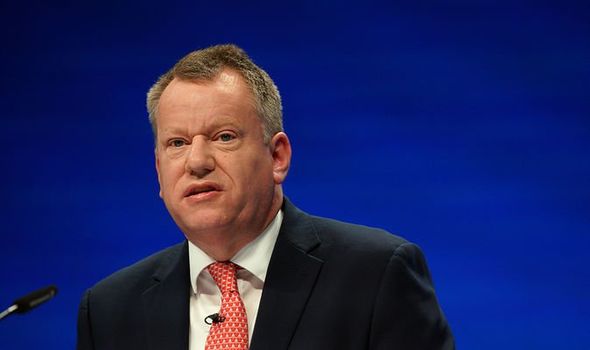 He said Brussels has ignored the sensitivities of the region’s history by imposing “overly strict” border checks since the UK quit the bloc.

Eurocrats have offered to ease the red tape but Britain wants to end the role of European courts in overseeing legal disputes.

Lord Frost condemned the EU for behaving “without regard to the huge political, economic and identity sensitivities” in Northern Ireland.

He said Brussels had “destroyed cross-community consent” with an “overly strict” enforcement of the Northern Ireland Protocol and that “has begun to damage” the Good Friday Agreement.

Lord Frost revealed he considered resigning as a special adviser to Boris Johnson when he was Foreign Secretary in December 2017 after reading the terms of the joint report struck by Theresa May that set the terms for the Brexit process after realising “a crucial pass had been sold”.

He made the comments in the foreword to a new paper for the Policy Exchange think tank that sets out how negotiations in the Brexit process have been hampered by decisions made since then.

Lord Frost argues that the joint report was a result of the UK failing to make “the necessary mental shift from being a member of the EU to negotiating exit from the EU”.

He also claimed it was a result of the “extreme weakness” of Mrs May’s Government after the June 2017 election.

Roderick Crawford, who wrote the Policy Exchange paper, said the joint report – and what it committed the UK to – led to a flawed February 2018 draft withdrawal agreement and the subsequent November 2018 Withdrawal Agreement.

The paper says that led to the fall of Mrs May’s government in 2019 and “tied the hands” of the new Government led by Mr Johnson that year as it renegotiated the terms of Brexit.