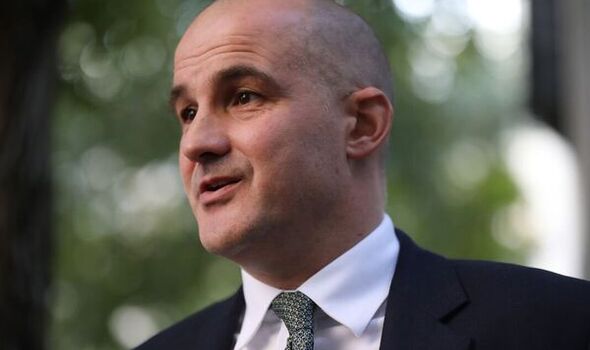 Jake Berry said the first cracks in Cabinet discipline were already showing after briefings of divisions among senior ministers about planning reforms.

He warned the Prime Minister there is just six months to get a grip to stop the party heading into an election defeat.

Allies of Levelling Up Secretary Michael Gove said he is opposed to the block on expansion of the green technology.

Sir Jake said that “spells real danger for my government”, warning about the “breakdown” in cabinet discipline.

He said: “I was in the Liz Truss government. We sort of knew it was over when we lost Cabinet collective responsibility. This is the first crack in the wall from Michael Gove.”

Asked if government ministers looked competent, he replied “some of them are”.

Mr Sunak is pushing for action on a range of issues in the next few weeks to show his government is acting on the issues that matter most to the public.

He is expected to drop in on a meeting with Home Secretary Suella Braverman and police chiefs later in the next few days to press for a crackdown on Just Stop Oil protests.

Changes to planned laws to protect people online are expected to be laid out tomorrow (TUES) that will give internet users more control over what they are shown, so they can screen out offensive material.

Sir Jake said the government has “got about six months to get this right” and show the public it can be trusted to do the job and avoid defeat at the next election.

A number of Conservative MPs have announced in recent days that they are planning to stand down at the vote, including  net-zero tsar Chris Skidmore and levelling-up minister Dehenna Davison.

Sir Jake said: “On colleagues’ morale, I do think the government has got quite a narrow window to grip some of these issues and prove that we are competent to the British public.

“If we do that I can absolutely see a path to victory, including winning many of those red wall constituencies again.”

Transport Secretary Mark Harper insisted the exodus of younger MPs, including some who were tipped as rising stars in the party, was only happening now because Tories have been given until December 5 to make a decision due to the review into constituency boundaries.

He said: “You are going to see those all bunched together so I don’t think there’s anything particularly to write home about that.”

Ms Davison, who became Bishop Auckland’s first Conservative MP in 2019, is 29, while senior Conservatives quitting include Chloe Smith and William Wragg, who are 40 and 34 respectively.

The party has faced some dismal polling about its chances of electoral success at the next election, expected in 2024.

Mr Harper said: “If we are being realistic about it, we are not going to turn things around overnight.”

The Cabinet minister said he accepts that “things are not easy at the moment”.

He said: “There’s the strikes – not just on the railways, you know, we’ve got a nurses’ strike coming up. We’ve got the problems of the protestors on the roads. We’ve got the small boats across the channel… There’s a general sense, you know, the government’s not in control of events and that is so dangerous for a government.”

Mr Sunak is facing a potential threat from Nigel Farage who is said to have been “testing the water” with northern Tories unhappy with the Prime Minister’s leadership.

The former Ukip and Brexit Party leader has been reportedly having meetings with MPs in red wall seats to discuss the Reform Party he is linked to.

Mr Sunak will be keen to see off a resurgence from Mr Farage, who has the potential to split the vote and allow Labour to pick up seats if he decides to throw his energy back into campaigning.

The Prime Minister was last week forced to pull a vote on the legislation that would set a target of building 300,000 homes per year when around 50 Tory MPs threatened to rebel.

He is now facing another revolt over the planned laws from a different wing of the party concerned that the ban on windfarms is the wrong move at the time of an energy crisis.

Around 30 Tories are now believed to be backing a bid to force the Prime Minister to change his mind.

Alok Sharma, who was president of the UK’s Cop26 climate summit, is among the rebels.

He said “local communities decide” if they are happy to have wind farms, backing residents being given reduced energy bills in exchange for their support of new developments.

No 10 insiders insisted it was “very, very unlikely” that Mr Sunak would back down on wind farms.

The PM has a working majority of 69 votes and Labour is also planning to back the amendment, even though the party believes it “swaps the ban for what is still a highly restrictive planning regime on onshore wind”.

Shadow climate change secretary Ed Miliband said: “Onshore wind is the cheapest, cleanest energy we have. The Tories’ ban has kept bills high and damaged our energy security. Rishi Sunak‘s weakness means he’s having to be dragged to scrap it by his backbenches. He should swallow his pride and U-turn now.”