Foster Friess, a Wyoming businessman who founded an investment firm, made a fortune and gave a lot of it away to Republican presidential candidates and charities, sometimes with flair, died on Thursday in Scottsdale, Ariz. He was 81.

His organization, Foster’s Outriders, which confirmed the death, said he had been receiving care at the Mayo Clinic there for myelodysplastic syndrome, a disorder of the blood cells and bone marrow.

On Twitter, Gov. Mark Gordon of Wyoming, who defeated Mr. Friess in the Republican gubernatorial primary in 2018, called Mr. Friess “a strong and steady voice for Republican and Christian values.”

Mr. Friess’s run for governor was his only try at major elected office. In the political arena he was primarily known for his donations, particularly to the presidential bids of Rick Santorum, the former United States senator from Pennsylvania, in the 2012 and 2016 campaigns. After Mr. Santorum left the 2016 race, Mr. Friess became one of the first Republican megadonors to embrace Donald J. Trump.

But to many, the most important support that Mr. Friess, an evangelical Christian, and his wife, Lynnette, provided was to charities. Foster’s Outriders and the Lynn and Foster Friess Family Foundation have provided scholarships, financed work for homeless people, supported water projects in Africa and much more. His organization said Mr. Friess had donated $500 million in his lifetime.

His 70th-birthday party in 2010 in Jackson Hole, Wyo., where he lived much of the year, was the stuff of legend. The website wyofile.com described it in 2011:

“In the invitations to the party, Friess, a born-again Christian, had asked the guests to identify their favorite charity that reflected the values of his favorite quote from Galatians: ‘Carry each other’s burdens, and in this way you will fulfill the law of Christ.’ He vowed to give $70,000 to the most worthy nominee.”

When the time came to announce the winner, the servers at the Four Seasons Resort, where the party was being held, distributed envelopes to the guests.

“Friess asked the lucky winner to stand up and shout, and for the other guests to remain seated,” the account continued. “Then he sat back and waited for the mayhem.”

As people opened the envelopes, someone at every table stood and shouted, “I won!” He had funded every request, at a cost of $7.7 million. 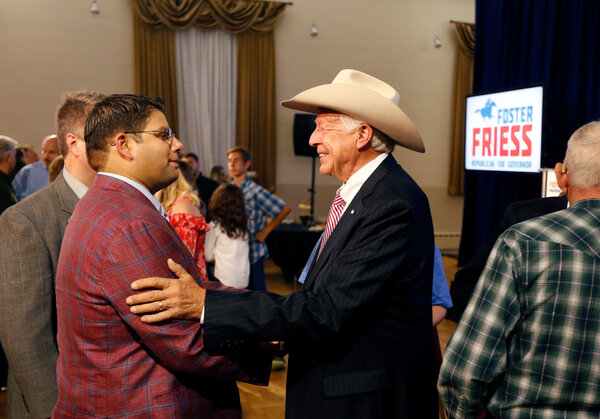 Foster Stephen Friess was born on April 2, 1940, in Rice Lake, Wis. His father, Albert, was a cattle rancher, and his mother, Ethel (Foster) Friess, was a homemaker.

“I came from nothing,” he told The New York Times in 2018 during his campaign for governor when asked if he himself might be considered one of the “elites” he was railing against. “My mom dropped out of school in eighth grade to pick cotton and save the family farm. My dad had a high school education.”

He graduated from the University of Wisconsin in Madison with a degree in business administration and served in the Army as an intelligence officer for a guided-missile brigade at Fort Bliss in Texas.

After working in finance for several years, he founded the investment management firm Friess Associates in 1974 and was soon regarded as a first-rate stock picker. His flagship asset, the Brandywine Fund, swelled to more than $15 billion. He sold a controlling interest in Friess Associates to the Affiliated Managers Group in 2001.

On the political side, Mr. Friess did more than support candidates. In 2010, he was a founding investor in The Daily Caller, Tucker Carlson and Neil Patel’s conservative news and opinion website.

In 2012 Mr. Friess supported Mr. Santorum not so much because he agreed with all his policies — “I try to talk him out of them,” he told the broadcaster Lou Dobbs in February 2012 — but because he thought the Republican Party needed a new face.

Later that month Mr. Friess made headlines when, on MSNBC, Andrea Mitchell asked him whether Mr. Santorum’s statements on “the dangers of contraception” would hurt his campaign.

“Back in my days,” Mr. Friess said, “they used Bayer aspirin for contraception. The gals put it between their knees, and it wasn’t that costly.”

In the next presidential campaign, Mr. Friess also supported Mr. Santorum initially. In mid-2015, with the Republican field choked with candidates and the nastiness level increasing, he called on the candidates not to “drift off the civility reservation.”

In May 2016, with Mr. Santorum out of the race and Mr. Trump having secured the Republican nomination, Mr. Friess threw his support to the Trump cause, though acknowledging that Mr. Trump had advanced by showing the very incivility he had decried — something he expected would change to a more presidential tenor.

Mr. Friess supported Mr. Trump throughout his administration, and when he ran for governor, the Trump family tried to return the favor — the president’s son Donald Jr. endorsed him in an opinion article in The Star Tribune of Casper, Wyo. President Trump himself was quieter, although he did offer a Twitter post late in the campaign endorsing Mr. Friess. Mr. Gordon’s victory was cited by some of as evidence of Mr. Trump’s vulnerability, though others saw it more as a local matter.

Three weeks ago, when Darin Smith, a lawyer and businessman who has contended that Mr. Trump “probably” won the 2020 election, announced that he would challenge Representative Liz Cheney, Republican of Wyoming, who has been critical of Mr. Trump, in the 2022 primaries, he said that Mr. Friess would be his campaign chairman.

Mr. Friess’s wife of 58 years, Lynnette Estes Friess, survives him, as do their four children, Traci, Stephen, Carrie, and Michael; a brother, Herman; and 15 grandchildren.