Speaking to GB News host Dan Wootton, Daily Express columnist Carole Malone said that Mrs May, who was Prime Minister from 2016 to 2019, had done “far more damage” than Boris Johnson. Ms Malone argued that Mrs May had committed to the pledge “without a plan” and that she “didn’t talk to anybody about it.”

The former Sunday Mirror journalist blasted the pledge as “deranged”, arguing it would cost a trillion and a half before other spending commitments or the cost of living crisis were taken into account.

She said: “It is deranged because it’s going to cost this Government or whichever Government is in power over the next few years.

“It’s going to cost a trillion and a half a year to impose the measures necessary.

“That’s going to cost every household an extra two and a half grand every year on top of everything else. 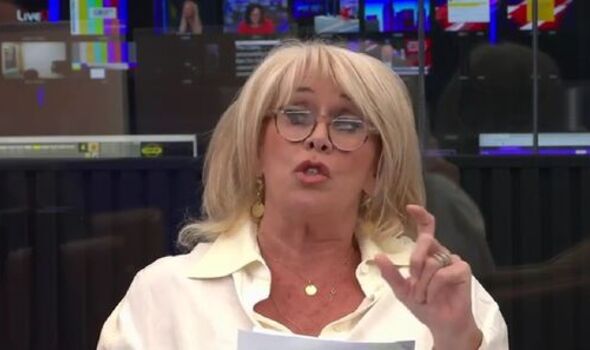 “It’s kind of makes me cross when they talk about this country.

“We are responsible for one percent of global emissions.

“China 28 percent, America 15 percent, India seven and a half percent.

“None of those have committed to 2050 in the same way we have.

“I was doing some reading on this today and I realised only 14 countries have made legally binding pledges to net zero.

“Only 57 countries out of 139 have got a detailed plan about how they’re going to get there.

I’m not entirely sure we’re one of those 57.

“You know it’s all very well saying we’re going to do this but Theresa May did this without a plan.

“She did it with no consultation, she didn’t talk to anybody about it she just announced it a month before she went.

“I just think it’s interesting you know when you see her looking at Boris in Parliament or talking about him.

“She talks about him like he’s an idiot, she’s the idiot here because she thought about nothing.

“You know all the caps on the energy bills now.

“She was warned by financial institutions at the time not to do this because it would kill the competitive markets and that’s exactly what happened.

“She was told that consumers would pay the price in the end and that’s exactly what’s happening now.

“So, Theresa May has done a lot more damage than Boris Johnson in her tenure than Boris ever did.”