With President Trump touching down in North Georgia on Monday to court white rural voters and President-elect Joseph R. Biden Jr. rallying support from a diverse electorate in Atlanta, the high-stakes Senate runoffs are concluding with a test of how much the politics have shifted in a state that no longer resembles its Deep South neighbors.

Should the two challengers win Tuesday and hand Democrats control of the Senate, it will be with the same multiracial and heavily metropolitan support that propelled Mr. Biden to victory in Georgia and nationally. And if the Republican incumbents prevail, it will be because they pile up margins in conservative regions, just as Mr. Trump did.

That’s a marked change from the 2000 election, when George W. Bush won decisively in the Atlanta suburbs to win the state and Democrats still ran competitively with right-of-center voters in much of rural North and South Georgia.

After resisting the tide of Republicanism longer than in other parts of the South — it didn’t elect its first G.O.P. governor until 2002 — Georgia became a reliably red state in the nearly two decades since. But now, it’s fast becoming a political microcosm of the country.

Although Georgia still skews slightly to the right of America’s political center, it has become politically competitive for the same demographic reasons the country is closely divided: Democrats have become dominant in big cities and suburban areas but they suffer steep losses in the lightly-populated regions that once elected governors, senators and, in Georgia, a native-born president, Jimmy Carter.

“Georgia is now a reflection of the country,” said Keith Mason, a former chief of staff to Zell Miller, the late Democratic governor and U.S. senator from a small town in North Georgia. Mr. Miller helped hold off Republican realignment in the state in the 1990s only to accelerate it in the early 2000s when he crossed party lines to endorse President George W. Bush’s re-election.

Conservative Democrats like Mr. Miller are rare, as are the sort of liberal-to-moderate Republicans who were also once found in Georgia. Today, though, the standard-bearers of the two parties in the state reflect thoroughly nationalized parties.

After nominating a string of candidates for statewide office who they hoped would be palatable to rural whites, only to keep losing, Democrats elevated three candidates in the past two years whose views placed them in the mainstream of the national party and whose profiles represented the party’s broader coalition.

Stacey Abrams, a Black former state representative whose district includes portions of Atlanta, fell 55,000 votes short of being elected governor in 2018; Jon Ossoff is a white, 33-year-old documentary filmmaker from a prosperous Atlanta family; and the Rev. Raphael Warnock grew up in impoverished circumstances in Savannah before becoming pastor at the country’s most storied Black church, Ebenezer Baptist in Atlanta.

“It looks nothing like the party of the ’90s and early 2000s,” said Jennifer Jordan, a Democratic state senator. She recalled how the former governor Roy Barnes, a Democrat who succeeded Mr. Miller in 1999, “used to brag about his N.R.A. affiliation. 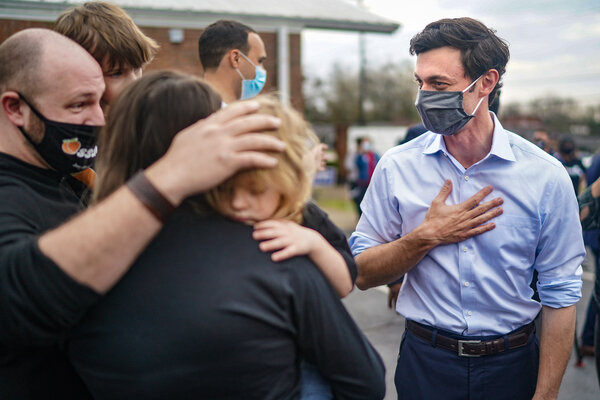 The Senate hopefuls are embracing the change. “Think about how far we’ve come, Macon, that your standard bearers in these races are the young Jewish journalist, son of an immigrant, and a Black pastor who holds Dr. King’s pulpit at Ebenezer Baptist Church,” Mr. Ossoff said during a recent drive-in rally in the central Georgia city.

The two candidates are also gladly accepting help from their national party, something Georgia Democrats once shied away from. In addition to Mr. Biden’s Monday visit, Vice President-elect Kamala Harris was campaigning in Savannah on Sunday.

It was no accident that Republicans steered Mr. Trump away from greater Atlanta in his two trips to the state during the runoffs: In December, he visited Valdosta, in South Georgia, and on Monday he will appear before voters in Dalton, which is far closer to Tennessee than the state capital.

Yet even bringing the president back to Georgia at all marked a risk for Republicans, after weeks in which he roiled G.O.P. politics in the state. He demonstrated his willingness to intervene once again this weekend: in an extraordinary phone call on Saturday, Mr. Trump pleaded with Georgia Secretary of State Brad Raffensperger to find enough votes to reverse his loss in the state, The Washington Post reported.

Although today’s Georgia candidates are a better fit for the current Democratic Party, and may more easily energize the young and nonwhite voters who make up its base, they have struggled in much of the state’s rural areas. Mr. Biden was able to defy this trend in his November victory, outperforming Ms. Abrams’s 2018 showing and Mr. Ossoff’s November performance in some of the state’s most conservative redoubts.

“That was enough to win the state by 12,000 votes,” said Michael Thurmond, the chief executive of DeKalb County. “And it shows why we need to do better reaching working-class white voters.” (The president-elect also ran better than Ms. Abrams and Mr. Ossoff in much of metropolitan Atlanta.)

If the Democrats have shifted away from putting forward candidates like the Mr. Miller and former Senator Sam Nunn, another centrist from small-town Georgia, Republicans have turned to elevating candidates much like their national leader: David Perdue and Kelly Loeffler are wealthy business executives with little political experience.

And just as with Mr. Trump, the attempts by the two incumbents to rebrand themselves as populists to appeal to rural Georgians have had the effect of alienating many suburban voters who were once steadfast Republicans but now recoil from the party of Trump.

Had Mr. Perdue run just slightly better in the former Republican pillar of Cobb County, for example, he could have reached 50 percent statewide in November and avoided a runoff. But he didn’t even garner 44 percent in the county, which encompasses the northwest suburbs of Atlanta, after winning it six years ago with more than 55 percent of the vote.

Taken together, this has created a state that’s nearing 50-50 parity and fostered a style of politics in which mobilization takes precedence over persuasion, because the bright lines between party and region have left few Georgians up for grabs.

“There are very few swing voters,” said Ms. Abrams, now a voting rights activist. She said that this was particularly the case in a general election runoff when turnout typically falls and “you are trying to convince the core of your base to come back a second time in a pretty short period.”

The demographics, though, account for much of the reason that the state has grown more politically competitive.

There has been a population explosion around Atlanta, thanks to an influx of Asian, African and Hispanic immigrants as well as a migration of native-born Americans, white and Black alike, who have moved to the region because of family ties, the relatively affordable cost of living and expansive job opportunities.

Although long identified with Coca-Cola and Delta Air Lines, the city has become a corporate behemoth, home to companies like UPS and Home Depot as well as to the American headquarters of the carmakers Mercedes and Porsche.

Atlanta itself has long been a mecca for African-Americans but the entire metropolitan region is now diverse, and counties that were once heavily white and solidly Republican are now multiracial bulwarks of Democratic strength.

In 2000, for example, Al Gore received only 31 percent of the vote in Henry County, an exurban Atlanta community that was once dominated by farmland, including that of the former segregationist Senator Herman Talmadge. In November, Mr. Biden won almost 60 percent of the vote in the county, and the jurisdiction elected a Black sheriff for the first time.

Ms. Jordan, the state senator who represents a suburban Atlanta seat, said the population changes would have made Georgia more closely contested this decade but “Trump put a turbo booster on it” in large part because he energized such strong opposition among women.

Sheron Smith, 59, who attended Mr. Ossoff’s drive-in rally in Macon, said her own activism illustrated how the state had changed. Ms. Smith said she was always politically liberal, but did not get involved in organizing until 2016, when Mr. Trump’s election prompted her to join a progressive women’s group in town.

“I think a lot of people were like me,” Ms. Smith said, “and after 2016 we thought: ‘I have to do more. I can’t just sit on my hands. I have to get involved.’ And that energy has just stuck around. I want to be involved now.”

This engagement has prompted a full reversal of the old formula, in which Republicans hoped their overwhelming support in the suburbs would offset the Democrats’ historical rural strength.

“It’s a total 180 in terms of strategy,” said Mr. Thurmond, the DeKalb County executive, recalling the hotly-contested 1980 Senate race in which political junkies stayed up late watching the metro Atlanta returns — except then it was to see if Mack Mattingly, a Republican, could claim enough votes in the region to overcome Mr. Talmadge’s rural strength.

Four decades later, Georgia is close to evenly split again — but in ways that better reflect the Sun Belt than the Old South.

Jim Hobart, a Republican pollster reared in Georgia, said his home state was most politically similar to another battleground that Mr. Biden narrowly carried: Arizona.

“Both have increasingly large minority populations and are dominated by one large media market,” said Mr. Hobart, alluding to greater Atlanta and Phoenix.

Georgia, he added, is “a purple state now.”