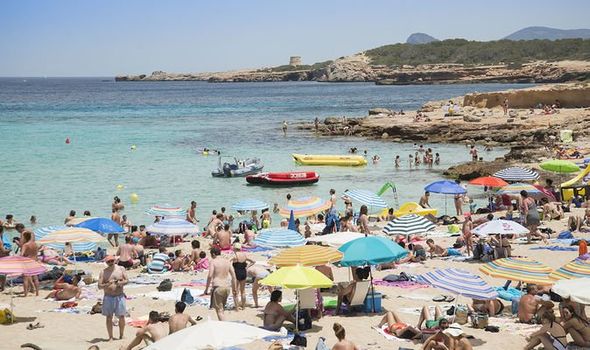 Officials are looking at a system based on whether people are double jabbed rather than the Covid rating of the country they are visiting. It means amber and green categories rating a country’s risk would be ditched. But the red list would continue, with travellers still required to quarantine in hotels on returning from the high-risk destinations.

The changes will come as a relief to many people who have been put off booking foreign trips under the complex and costly system.

And a surge in bookings may protect the jobs of thousands of workers in the travel industry who are on furlough. This scheme is due to end on September 30.

Paul Charles, founder of the travel consultancy PC Agency, said the plans had been shared with travel industry bosses and airlines.

He said: “The traffic light system is expected to be scrapped by October 1 ‑ at last. Airlines and some of us in the sector are aware of plans for a simpler system, where countries are either red or not.

“It will go some way to helping the sector revive, and revive it needs to, if the Government is to protect tens of thousands of jobs which are at risk because so much of the sector remains on furlough.”

Rules for fully vaccinated holidaymakers, who do not have to self-isolate after returning from green or amber countries, would likely remain the same under the new plans.

Currently, they have to take two tests ‑ one within 72 hours of the journey back to the UK and a second within two days after arriving home.

Non-vaccinated people enjoy the same rules as the double-jabbed for green countries but have to self-isolate at home for up to 10 days after coming back from those on the amber list. The requirements for them under the new system are unclear.

A Government source said: “No ministerial meeting has been held on [the plans] yet.”

However, ministers are under pressure to simplify the current system.

A key demand from the travel industry is the removal of Covid testing as a necessity of travel back to the UK, which they say puts customers off due to the cost.

This would bring the UK in line with much of the EU, which does not mandate tests for vaccinated travellers within the bloc.

Gatwick CEO Stewart Wingate called for testing to be removed altogether for travellers who have been double jabbed.

He said: “Other countries have done this and their aviation sectors are recovering much faster.”

“Decisions are informed by the latest risk assessment from the Joint Biosecurity Centre and wider public health factors. The next formal checkpoint review will take place by October 1.”

While this highly significant move comes later than we would have liked, it will contribute to recovery in the travel sector.

Essentially the Government is planning to move to a system of individual risk rather than one of blanket country risk.

We’d expect a system involving just red countries going forward ‑ and we obviously need to see the red list as small as possible.

The traffic light system has been a failure from day one when it was introduced earlier this year.

Consumers had no confidence in it, as it failed to be the simplistic system the travel sector and the public were hoping for.

It has not provided the boom for the recovery that was badly needed this summer either.

We are now seeing an encouraging attempt to revive the sector, but what’s also needed is a change to the onerous testing system which has cost consumers so much money, hassle and faff.

I would expect the pre-departure test when leaving a country for the UK to disappear for those who are fully jabbed as a result of this update. But it’s likely the day two PCR test will stay as it is.

It’s likely that those who are not fully jabbed will continue to be burdened with much testing and will have to shoulder the costs that go along with that.

To make a vote-winning change to the future of travel, the Government must commit to protecting the industry and the tens of thousands of jobs which are at risk due to the furlough scheme ending at the end of this month.