Hi. Welcome to On Politics, your guide to the day in national politics. I’m Lisa Lerer, your host.

[Get On Politics delivered to your inbox.]

I spent this past weekend in Iowa, attending a gathering put on by the state Democratic Party that basically amounted to a dorky political Coachella — less drugs, more clothes and about the same amount of self-regard.

As I wrote in the paper today, 19 presidential candidates spoke before party officials and voters (and nearly 200 members of the news media) in five-minute increments, presenting the first real opportunity to see the field in full.

Two things stood out as I sat through the hours of speeches in that hotel ballroom.

First, 19 candidates is a lot of people. I’ve been to plenty of party dinners in my day, but this was something else. It was enough to test even the biggest political junkies. This is a crowded field, and breaking out isn’t going to be easy, particularly for those candidates lingering at 1 percent or lower in the polls.

Second, this is an incredibly diverse field. Not only in terms of race and gender, but in often more overshadowed characteristics like age.

The striking age gap is the theme of an analysis we published over the weekend. The field spans four generations and includes the oldest (Senator Bernie Sanders, 77) and second-youngest (Mayor Pete Buttigieg, 37) candidates in modern history.

(Mr. Buttigieg was narrowly beaten out by former Gov. Jerry Brown of California, who was a few months younger when he ran for president in 1976.) 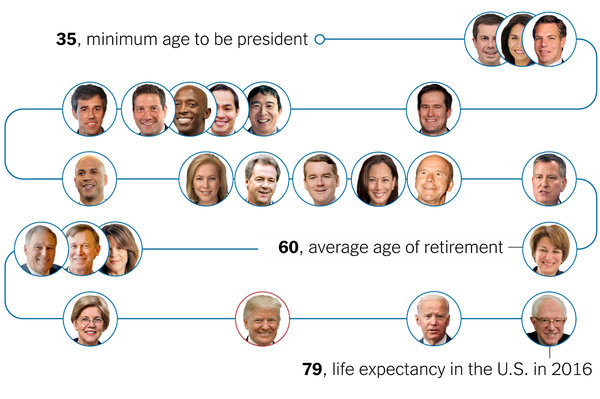 The generational issue manifests in all kinds of ways. Take this answer former Representative Beto O’Rourke, 46, gave a few weeks ago when he was asked about American exceptionalism:

“There is a hubris too often found in our foreign policy,” he said, after praising the role the United States can play in the world. “Where we seek to impose our way of life, our solutions, what we think is best for other people.”

That’s a pretty stark contrast from Joe Biden, 76, who has made restoring American greatness a major theme of his campaign. And it’s even more striking when compared with Hillary Clinton’s 2016 campaign — “America is already great” was one of her slogans.

But it’s also an answer that lines up way more closely with how younger voters view the world. A 2017 Pew poll found that 12 percent of those under 30 said the United States “stands above all other countries in the world,” the lowest share in any age category.

This split isn’t entirely about the age of the candidate: In his foreign policy, Mr. Sanders has also offered a robust critique of the Americentric worldview, detailing disastrous interventions in Iran, El Salvador, Guatemala and Vietnam.

But it may end up being about the age of the voters. As one generational expert said to me: “An interesting question is, could Bernie Sanders be the great champion for the millennial generation?”

Check out the article, complete with some phenomenal charts of candidates’ ages in elections over the past six decades.

And please, let us know what you think. Does age matter? Or, for the right candidate, is it only a number?

[Sign up here to get On Politics in your inbox.]

Drop us a line!

We want to hear from our readers. Have a question? We’ll try to answer it. Have a comment? We’re all ears. Email us at [email protected].

A chat with Doug Emhoff

So, I’m beginning to think that Matt Flegenheimer and I may have some weird, mystical powers. To refresh: Matt predicted in a recent newsletter that Senator Kamala Harris’s husband, Doug Emhoff, would become a viral sensation. And, it happened.

At the Iowa event this weekend, Mr. Emhoff seemed to be everywhere. Supporters of Ms. Harris chanted “DougHive,” the internet nickname for his fan club. Multiple presidential candidates told me how much they liked Mr. Emhoff. And when I finally approached the man himself, a woman rushed over to get a picture with the “bodyguard” — a reference to Mr. Emhoff’s rushing onstage to grab a protester at a California convention last week.

After his fan left the scene, I chatted with him about his newfound celebrity.

Doug: It’s surreal. But as I like to remind people, we still have a real life. We have a family. We’re a married couple. I’m still working full time. So to balance all of this and do it the right way, and really, my job is to support her fully. And that’s what I’m doing.

I will tell you, it’s so much about the smaller moments — the moments that nobody is seeing, behind the scenes, when we’re in the airport or at the coffee shop and people were coming up to her, whether it’s a Dreamer or someone who loved what she did in the Kavanaugh hearing, it’s really impacting people in a way that makes it so rewarding.

Are you going to get a little spouses club going?

Well, I know a lot of the spouses anyway from the Senate. So there’s six or seven of us. I already know them pretty well. We know [Representative Eric] Swalwell from California.

Chasten [Buttigieg] is my buddy. He and I have been going back and forth on Twitter.

There will be no crushing on Twitter. We started talking on DMs.

He slid into your DMs?

He slid into my DMs. But he’s a really great guy and we’ve gotten to know each other, so that’s been really cool.

I’m enjoying it. But, I want to remind everyone, it’s still real life for us. And so we’re taking this very seriously and she’s just doing it for all the right reasons and I’m just thrilled to support her. I’m really proud of her.

Bruce Mann, Amy O’Rourke, Jill Biden, give us a call! We’re not predicting it will change your life but … maybe?

What to read tonight

• Fast currents and swollen channels have made many of America’s rivers unsafe for commercial traffic, spreading economic pain from a spring of severe flooding.

• A wide range of companies, from giant corporations to local restaurants, are lining up to complain about Silicon Valley’s power. Washington is listening.

• The Upshot asks: How safe is sunscreen? Not to spoil the article, but the takeaway is, you should wear sunscreen.

Leonardo da Vinci’s “Salvator Mundi” become the most expensive painting ever auctioned when it sold for $450 million. Then, it just sort of vanished.

Were you forwarded this newsletter? Subscribe here to get it delivered to your inbox.

Thanks for reading. Politics is more than what goes on inside the White House. On Politics brings you the people, issues and ideas reshaping our world.

An earlier version of this article misstated the year Jerry Brown ran as the youngest candidate in history. It was 1976, not 1992.