For families in West Virginia, which has had especially sharp drops in child poverty over the past three decades, the shift has played out in ways not fully captured by statistics.

The Jackson family benefits from a safety net that has expanded significantly over the last generation.Credit…Maddie McGarvey for The New York Times

For this article, the reporter worked closely for five months with researchers from a nonpartisan group to document the decline in child poverty and the forces pushing it lower.

HUNTINGTON, W.Va. — When Cecelia Jackson was born nearly three decades ago, about a quarter of American children were poor, a head count of hardship that for most of her childhood included her.

Her father, a truck driver with a grade-school education, injured his arm when Ms. Jackson was young, then raised five children on a disability check. Food ran short, worries long, and she remembers exactly one vacation, an eight-hour drive to the beach.

“We lived on the struggle bus,” she said.

Ms. Jackson’s children struggle less. Like her father, Ms. Jackson earns a modest wage — as a counselor at a Head Start program — but she benefits from a safety net that does much more for low-income parents, especially those like her who work. The share of children the government considers poor has fallen by more than half, and Ms. Jackson’s children — Conner, Ezekiel and Lyric — are not among them.

While she and her husband, Jarren, a student and musician, earn less than $21,000 after taxes and work expenses, they receive about as much in government aid, which doubles their net income. That degree of support, partly meant to compensate for the prevalence of low wages, has become common among low-income working families, and it lifts the Jacksons from thousands of dollars below the poverty line to thousands above it. 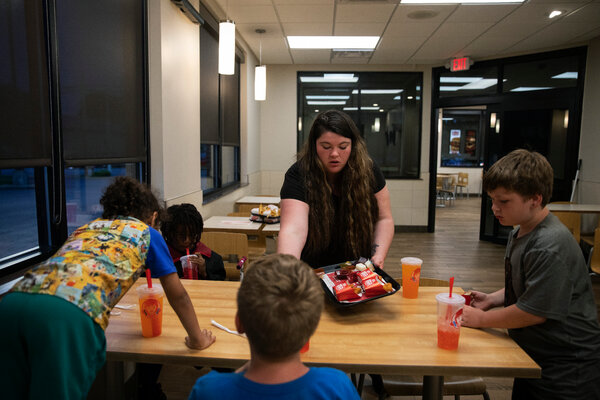 “Absolutely it makes a difference,” Ms. Jackson said. “The kids get plenty to eat. If they’re sick, we can take them to the doctor. I’ve got dreams and goals not to need it one day, but for now I’m grateful it’s here.”

Child poverty has plunged over the last generation, and few places have experienced larger declines than West Virginia, a state that once epitomized childhood deprivation. Poverty among the state’s children fell nearly three-quarters from 1993 to 2019, according to a comprehensive analysis by Child Trends, a nonpartisan research group, conducted in partnership with The New York Times. That compares to a 59 percent drop nationwide.

If West Virginia’s child poverty rate was as high now as in 1993, nearly 80,000 additional children would be poor, a population larger than the state capital, Charleston.

The statistical progress is impressive, but children escape poverty one complicated family story at a time. A visit to Huntington, a rusting Appalachian river town where tales of hardscrabble childhoods abound, shows how an expanded safety net offers children protection their parents often lacked and profoundly affects families’ economic and emotional lives.

That safety net is less the product of a unified vision than a series of ad hoc programs that reflect both liberal and conservative ideas. Over the past quarter-century, tough welfare laws cut cash aid to nonworking families, but tax credits for low-wage workers expanded and overall spending grew.

In a series of conversations, the Jacksons spoke in unusual detail about the impact of aid on their budgets, mental health and parenting style. So did other families at the Head Start center where Ms. Jackson works. Collectively their stories offer a vivid if unscientific sampling of life on the front lines of child-poverty reduction.

How the Safety Net Lifts the Jacksons Out of Poverty

The couple has three children: Conner, 9, Ezekiel, 5, and Lyric, 2. Roughly half of the family’s income consists of government aid. Without it, they would be considered poor. With it, they are not.