Many Trump supporters do not believe that he can or will lose, and say he would be justified in questioning whether Democrats manipulated the outcome. But some believe a loss is a loss. 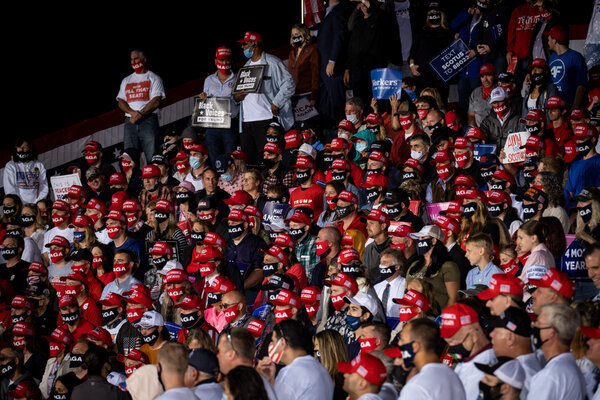 Alan Knight can list the reasons he won’t trust the results of the Nov. 3 election if President Trump loses.

First, almost everyone he knows is supporting the president. “Just from everything I see around me, it’s going to be a landslide,” the 68-year-old Republican from Sahuarita, Ariz., said. Mr. Knight also believes Democrats will do whatever they can to win — even if it means they have to “pull votes out of ditches” and “cheat in every possible way,” he said.

So, as he sees it, Mr. Trump’s refusal to commit to a peaceful transfer to power to Democrats at this point makes sense, even if it was dismissed by other Republican leaders and condemned as dangerous by Democrats.

“He’s going to wait and see whether it was an honest election before handing over power,” Mr. Knight said.

Trump supporters saying they have Mr. Trump’s back is not a surprise at this point in the Trump era. But recent interviews with Republican voters in several battleground states show just how much Mr. Trump’s unrelenting campaign to shake trust in voting has compounded the deep misgivings his supporters have about the integrity of the process. While some were troubled by the idea that Mr. Trump might refuse to leave if he was decisively defeated, many simply do not believe that he could, or will, lose fair and square.

Polls now show Mr. Trump behind in most battleground states and nationally. If he does come up short in November, these voters say he would be justified in questioning whether Democrats manipulated the outcome and whether the results and state-by-state race calls of news organizations were wrong.

Sylvia Rhodes Blakey, 73, of Green Valley, Ariz., was categorical: The only way Mr. Trump will lose is if the Democrats rig the election in favor of former Vice President Joseph R. Biden, she said.

“There’s going to be massive attempts at fraud,” Ms. Blakey said. “There are so many illegals that have the names of dead people, and they’re voting on those ballots.”

Even though there is no evidence of widespread fraud, the allegation came up repeatedly among Republicans as a reason for Mr. Trump not to commit to handing over power.

Jim Thienel, 73, of Waterford, Mich., said that in his view, fraud was inevitable and Mr. Trump was simply refusing to accept any election tainted by it.

“I think what Trump is really saying is that if the election is filled with fraud, which I believe it’s going to be, do you walk out on your role as the president of the United States simply because the Democrats cheated?” said Mr. Thienel, who runs an appliance repair shop.

It is impossible to tell whether Mr. Trump would follow through on his threats not to leave willingly, or whether this is another example of the bluster and hyperbole he has always employed to generate controversy and enrage many on the left. 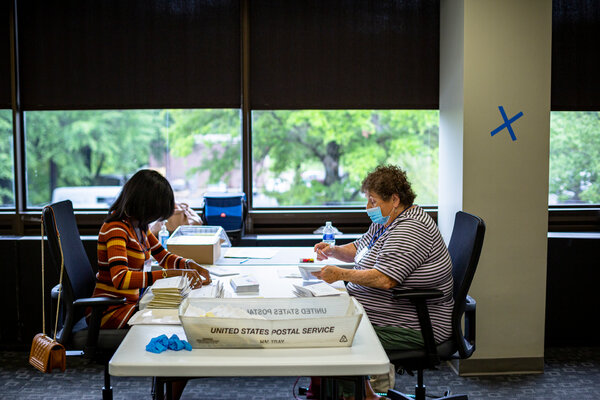 But his refusal to make a plain-spoken commitment to a transfer of power, as other Ameican leaders have done, stands out in the series of unprecedented developments rippling through this election season. Already, tens of millions of people will be casting ballots by mail for the first time, putting pressure on that method of voting and processing. The vote count is likely to continue in some key states after Nov. 3. And there are the persistent, unfounded claims of a president who insists that mail-in ballots will be manipulated by his political opponents.

Election experts and campaign strategists warn that these unique circumstances have made Republicans more skeptical than ever about the legitimacy of the electoral process, which could lead to considerable political instability.

“The main effect President Trump has had is to make Republicans very skeptical about mail voting,” said Whit Ayres, a Republican pollster who has been critical of the president. According to a poll conducted this month by The Associated Press-NORC Center for Public Affairs Research, about twice as many Democrats plan to cast their ballot by mail than Republicans, 52 percent compared with 28 percent.

If those mail votes take time to count, and eventually swing the election to Mr. Biden, Mr. Trump and the G.O.P.’s small army of lawyers could try to claim fraud.