WASHINGTON — Treasury Secretary Steven Mnuchin is seeking to wrest control of the Secret Service from the Department of Homeland Security and has been lobbying President Trump to back such a move, according to administration officials.

The discussions between the Treasury Department, the White House and high-ranking Secret Service officials have taken place over the past year and have intensified in recent months, as Mr. Trump has pressed homeland security officials to focus on stemming immigration and ousted some for failing to do so.

The president supports the idea of moving the Secret Service back to the Treasury Department, where it was housed until 2003, according to people familiar with the discussions. The agency, which had been part of Treasury for more than 100 years, was transferred as part of the Homeland Security Act, which sought to consolidate security agencies after the Sept. 11, 2001, attacks.

Some senior officials at the Department of Homeland Security have been pushing back against the move, concerned about losing an agency that has cybersecurity and investigative components. The department, which oversees the Cybersecurity and Infrastructure Security Agency, is responsible for protecting the country against cyberattacks and ensuring election security, in addition to enforcing immigration law.

High-ranking Secret Service agents, who have long felt neglected by homeland security leadership, are welcoming Mr. Mnuchin’s interest given the turmoil at the Department of Homeland Security, which has intensified with Mr. Trump’s laser focus on border and immigration security.

The agency has been troubled by a constant shuffling of leaders, including the departures of Kirstjen Nielsen, the former homeland security secretary; L. Francis Cissna, the former director of United States Citizenship and Immigration Services; and Ronald D. Vitiello, the former director of Immigration and Customs Enforcement. And this week, the Department of Homeland Security announced that Mark Morgan, the acting director of ICE who has pushed for nationwide deportation raids, would replace John Sanders as the commissioner of Customs and Border Protection.

Transferring the Secret Service to the Treasury Department would require an act of Congress, making such a switch unlikely unless the president could garner bipartisan support.

The Secret Service’s penchant for protecting presidents has been glamorized by Hollywood films like “In the Line of Fire,” but its history and portfolio of responsibilities is much broader.

The original purpose of the Secret Service, when the agency was formed in 1865, was to investigate currency counterfeiting and financial crimes, according to a 2014 report by the Congressional Research Service. In 1894, it started protecting President Grover Cleveland, a job that has evolved into guarding all current and former presidents and their families, along with other top government officials, including cabinet members like Mr. Mnuchin.

Mr. Mnuchin this month hosted high-ranking Secret Service agents at the Treasury Department to discuss the move. He grew interested in the cybersecurity and anticounterfeiting components of the agency and has had continuing discussions with high-ranking officials on taking control of it, according to officials.

He said recently that bolstering the security of the nation’s currency will be his top priority when it is eventually redesigned, and he has pointed to cybersecurity as the primary risk facing the financial sector. 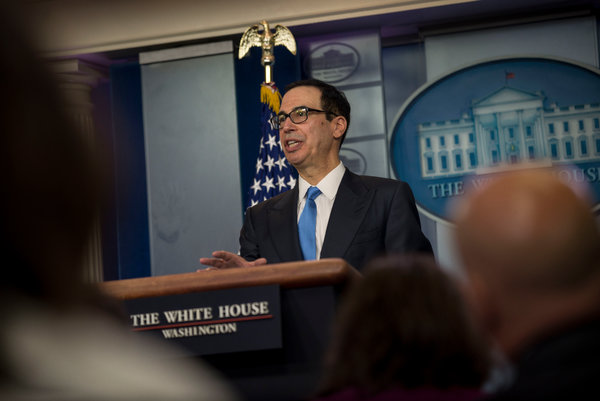 “I worry about cybersecurity in that we need to have a safe and sound financial infrastructure,” Mr. Mnuchin said at an event sponsored by Axios. “This is a real issue today.”

A Treasury Department spokesman had no comment on the discussions. A spokesman for the Department of Homeland Security did not return request for comment.

Mr. Trump purged multiple high-ranking officials this year from the Department of Homeland Security, including the Secret Service director, Randolph D. Alles, who was aware of Mr. Mnuchin’s interest in taking control of the Secret Service. Mr. Alles has since been brought back to the department by Acting Secretary Kevin McAleenan to work as acting deputy under secretary for management.

The current director of the Secret Service, James Murray, also worked for the agency when it was under Treasury’s control. Some current and former officials said the Secret Service suffered when it was transferred to the Department of Homeland Security, where it joined Customs and Border Protection, the Federal Emergency Management Agency, the Transportation Security Administration, Immigration and Customs Enforcement and the Coast Guard.

“When the Secret Service was with Treasury, it was the largest law enforcement agency within a department, and then it was merged into a department whose priorities were immigration and airplanes,” said Don Mihalek, a former Secret Service agent and the executive vice president of the Federal Law Enforcement Officers Association, which represents the Secret Service. “So the mission set and transition from one department to the next was different.”

While Mr. Trump has had little luck in getting bipartisan support for initiatives, Democrats and Republicans in Congress have expressed interest in changing the oversight of the Secret Service in the past.

In 2014, after a series of missteps by the agency, Jason Chaffetz, a Republican congressman from Utah at the time, argued that the agency had lost its focus on security and suggested that it should be relocated to the Treasury Department. That sentiment was echoed by Representative Elijah E. Cummings, Democrat of Maryland.

“Looking at the positioning of the agency, whether it should be in Treasury or be in homeland security, is one issue that must be taken up,” Mr. Cummings said.

And Representative Gerald E. Connolly, Democrat of Virginia, suggested at the time that the Secret Service could be split up, with the anticounterfeiting and financial crime functions going to Treasury and the protection responsibilities staying with the Department of Homeland Security.

The push by Mr. Mnuchin fits with his tendency to expand his department’s influence, in some cases beyond its traditional lanes. The secretary initially took the lead in trade negotiations with China before Mr. Trump put the United States trade representative, Robert Lighthizer, in charge.

Mr. Mnuchin was also interested in taking over the Office of Federal Student Aid from the Education Department in 2017. He put up a fight last year when the White House Office of Management and Budget sought to take more control over how the Republican tax law was carried out.

The Treasury secretary has also become familiar with the Secret Service because he is under the close watch of its agents. In an interview this month, Mr. Mnuchin’s wife, Louise Linton, said that Secret Service agents follow him nearly everywhere.

“They especially like coming to SoulCycle,” Ms. Linton told Los Angeles Magazine. “They take all the bikes around Steve and just pedal away!”