The governor’s race this fall, along with a pivotal State Supreme Court contest next spring, will decide whether Republicans can solidify their grip on the swing state and remake its voting laws. 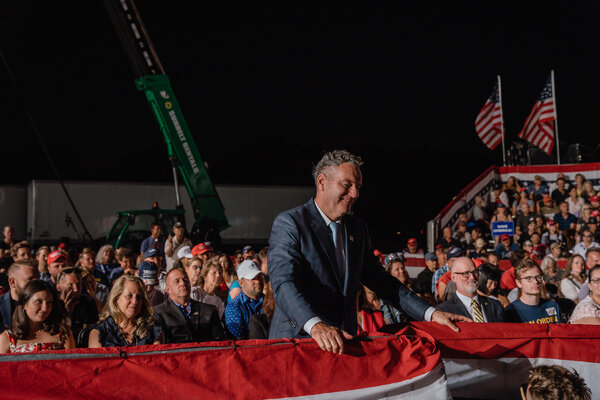 KAUKAUNA, Wis. — Nowhere in the country have Republican lawmakers been more aggressive in their attempts to seize a partisan edge than in Wisconsin. Having gerrymandered the Legislature past the point that it can be flipped, they are now pushing intensely to take greater control over the state’s voting infrastructure ahead of the 2024 presidential contest.

Two pivotal elections in the coming months are likely to decide if that happens.

His victory raised the prospect that Gov. Tony Evers, a Democrat who has vetoed a range of Republican voting bills, could soon be replaced by a Trump ally who has embraced calls to dismantle the state’s bipartisan election commission, invoked conspiratorial films about the 2020 election and even expressed openness to the false idea that Mr. Trump’s loss can still be decertified.

The second election, an April contest to determine control of the narrowly divided Wisconsin Supreme Court, could be even more important.

This year alone, the court’s 4-to-3 conservative majority has upheld the most aggressive partisan gerrymander of state legislative districts in the country, prohibited the use of most drop boxes for voters returning absentee ballots, and blocked Mr. Evers from making appointments to state agencies.

And three of the four conservative justices on the court voted to hear Mr. Trump’s objections to the 2020 election, which could have led to overturning Wisconsin’s results. Joseph R. Biden Jr.’s 20,000-vote victory in the state stood only because Justice Brian Hagedorn, a conservative, sided with the court’s three liberals.

Electing a liberal justice to replace the retiring conservative, Justice Patience D. Roggensack, would give Wisconsin Democrats an opportunity to enact a host of measures that currently have no shot at passing in the Republican-led Legislature. Bringing new lawsuits through the courts, they could potentially undo the gerrymandered legislative districts; reverse the drop box decision; and overturn the state’s 1849 law criminalizing abortion, which went back into effect in June when the U.S. Supreme Court struck down Roe v. Wade.

Wisconsin’s next two elections are inexorably linked. Mr. Michels has said that he will seek to change the state’s voting laws on his first day as governor. If he is indeed elected and moves quickly, new voting procedures could be in place before a new justice is elected to a 10-year term in April — and the court combined with Mr. Michels would have wide leeway to set voting rules for the 2024 presidential election, when Wisconsin is widely expected to again be a central presidential battleground.

“If they’re going to cherry-pick things that they know will depress a Democratic vote, it will absolutely impact every Democrat, including Joe Biden,” Mr. Evers said in an interview on Thursday. Referring to Mr. Michels, he added, “His election certainly would focus on depressing the vote of Democrats, no question about it.”

During the primary campaign, Mr. Michels promised to replace the Wisconsin Elections Commission with an agency that would effectively be under the control of Republicans. And while he never explicitly endorsed decertifying Wisconsin’s 2020 presidential election, Mr. Michels did not rule it out, either, saying enough to appease Mr. Trump — who has repeatedly demanded such a move.

At campaign stops and during primary debates, Mr. Michels invoked films about the 2020 election that propagate conspiracy theories falsely suggesting that Mr. Trump was the real winner. He claimed without evidence that there had been fraud in the state and pledged to prosecute the perpetrators.

“I’ve seen the movies ‘2000 Mules’ and ‘Rigged.’ And I’ll tell you, I know that there was a lot of voter fraud,” Mr. Michels said at a recent rally in Kaukauna, a small industrial city in the state’s politically swingy Fox Valley. “When I am sworn in as governor, I will look at all the evidence that is out there in January and I will do the right thing. Everything is on the table. And if people broke the law, broke election laws, I will prosecute them.”