(Reuters) – Democrats rode a wave of dissatisfaction with President Donald Trump to win control of the U.S. House of Representatives on Tuesday, giving them the opportunity to block Trump’s agenda and open his administration to intense scrutiny. 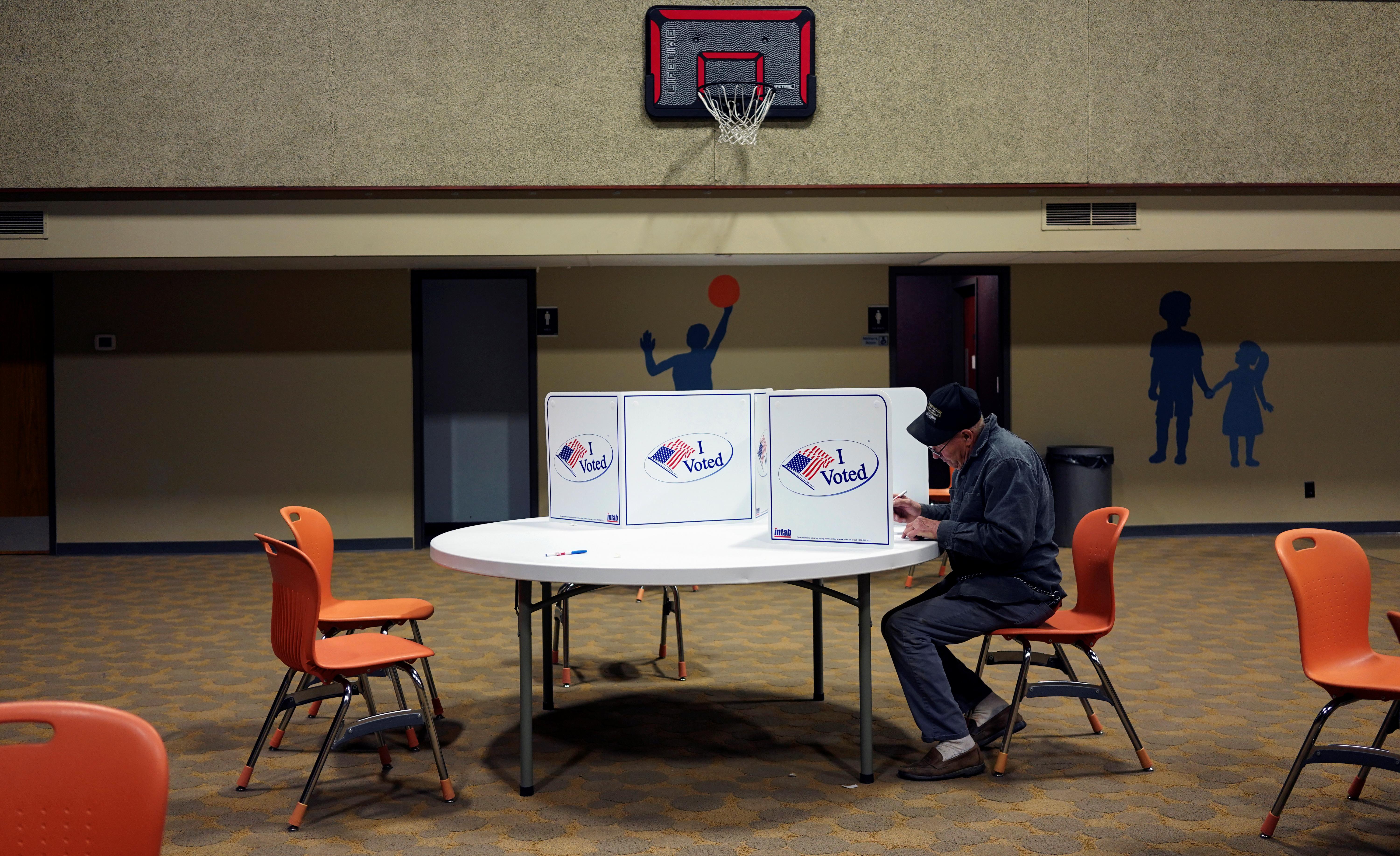 In midterm elections two years after he won the White House, Trump and his fellow Republicans expanded their majority in the U.S. Senate following a divisive campaign marked by fierce clashes over race, immigration and other cultural issues.

DOLLAR – The US dollar index was down 0.38 percent.

“It was a good enough night for the president…there wasn’t a ‘Blue Wave.’ I think it was a pretty good night for the markets and the U.S. economy. If we were to see fiscal stimulus, it would come in the form of infrastructure. That could be the big stimulus coming if you can put together a coalition. You can spin a tax cut politically for the rich but infrastructure is about jobs. I think that is the likely scenario. Right now, the economy is strong and companies are doing well with interest rates still low and with less regulation.”

“Things fell as expected, so we have to see if the House will affect the trade conflict. This really was what markets priced-in. We may see some recovery from major counterparts, but that alludes more to a natural recovery after the greenback gained by over 2.5 percent throughout October.”

“Assets are reacting overnight to shifting probabilities around the consensus view that Democrats will take the House; the probability of a Republicans losing their Senate majority remains trivial.”

“A break of 1.13 in euro/dollar and 3.25 in 10-year Treasury yields are significant short term technical levels. We are watching for potential spillover effects to other risk assets. In the short term, a Republican loss in the House, although in line with consensus expectations, should nevertheless amplify risk market volatility, detract from positive sentiment, and be positive for US rates.”

“Long dollar and short Treasury futures positioning is relatively stretched going into tonight and could exaggerate short term moves in these prices.”

“We are confident that these overnight moves will have next to no bearing on the medium-term direction of asset prices as participants digest the final outcome and the 2019 legislative agenda starts to take shape over the next several months.”

“There was some fear and risk of a sensationalist result today but it has come out as expected. It is a good result for consistency in the market.

“We’ll see a couple of days of risk-on trading on the back of these results. Then we’ll go back to closely analyzing the U.S.-China situation. There will be a lot of focus on the Trump-Xi meeting after the G20. The next time Trump speaks on trade there will be a lot of attention to what he says.

“Based on today’s results, it looks like it will be difficult for the Trump administration to pursue its agenda.”

“The surprise was that there was no surprise. I think everyone was bracing for any possible, crazy scenario to show itself tonight but it basically looks like the baseline consensus forecast was correct. If the futures are up now and they stay up it’s because there is an uncertainty factor that is now out of the market.”

“Everything is playing out pretty normally.”

“What’s important for the market is that this big event is now behind us and we know what we are dealing with. Obviously Trump will be on the back foot, he will be playing more defense and less offense going forward, but the market would have expected it.”

“We have a bit of divided government but that’s not necessarily market negative,”

“It’s going to moderate the Trump agenda, but the big stuff on tax is done and on deregulation it’s not clear that a Democratic House would change that too much.”

“The Democrats did a good job of selecting House candidates, many of whom are women with military backgrounds, to defeat GOP incumbents, so the House will be controlled by the Democrats, which will make Trump’s life miserable for the next two years, with many deep House committee investigations into his affairs, which could well lead to impeachment. Incriminations, however, will likely fly from both sides, as Trump will likely appoint a much more partisan Attorney General.”

“The GOP increased its majority in the Senate by several seats, which will make confirmations of judges and administration officials easier and overriding his vetoes harder. It will also make conviction of Trump, if impeached by the House, less likely.”

“One of the most important takeaways from the market participants’ viewpoint is that one of the uncertainties disappears – that is political uncertainty in the U.S. Of course, how the Trump administration will respond to the new political situation remains to be seen, but probably we shouldn’t expect too much change.”

“To the extent that political uncertainty disappears, the market is likely to be risk on, which means stock prices in the U.S. will likely rise and dollar/yen will be at least stabilized or may rise a little bit.”

“In the medium to long run, today’s election outcome is not expected to have a big impact on the U.S. financial markets. The Republicans under Trump have already got some policies rolling like tax cuts, and the midterm election outcome will at worst simply impede new policies from being enacted in the next two years.”

“The markets could show a text book reaction to the vote in the short-term, with equities coming under pressure and bonds benefiting in turn. But I expect the reaction to be limited as the Republicans losing control of the House does not spell a dramatic structural change.”

“From the market perspective, a lot of it was priced in. It’s not a huge surprise. Next up for the market is trade, we need to find out whether Trump goes harder on trade from here. The market will now focus on the G20 for any indications from Trump now that midterms are out of the way.”

“The return to political gridlock in Washington will likely serve to temper growth expectations, or at least moderate the prospect of additional stimulative fiscal policy. However, we don’t anticipate this to dissuade the Fed from continuing to deliberately tighten monetary policy as other areas of the economy maintain very strong momentum. This combination presents an additional impetus for the (Treasury yield) curve to move flatter from here.”

“If initial results hold then it will be a slight positive for the markets as the less preferred outcome for markets of a Democratic Congress didn’t materialize. If one attributes part of the nearly 10 percent drop last month to a pricing-in of a worst case outcome then we may be looking at a slight albeit short lived rebound in the days ahead.”

“Now that the elections are behind us, earnings and the Fed will be back in focus. All indications are that neither of those factors support expanding multiples for stocks.”

“The markets were geared for the Democrats winning the house. Now, we are seeing the dollar selling off as it looks certain that Democrats are in fact taking the house. This is almost exactly in line with expectations and polls.

“It’s a legislative gridlock as far as issues that require congressional approval are concerned. There is also the risk of a government shutdown.

“Trump has still got trade and policy levers and he is more likely to go harder on trade now. That’s our opinion. He will potentially extend tariffs to all Chinese imports by February. We’ll wait to see how this plays out.”

“In terms of major economic implications, I think importantly, two things don’t change. One is the 2016 tax law changes. With divided government, Democrats will have no ability to roll back any of those measures. And second, trade policy. Because the president has significant authority over trade policy and can move forward without Congress on tariffs.”

“If the domestic agenda is blocked as a result of divided government, Trump could actually pivot more aggressively toward trade because that’s an area where he’s less constrained and he feels like it resonates with his base … And whether it’s good economic policy or not, I think Democrats are hard pressed to stand up too aggressively to the President on trade policy.”

“I see scope for additional spending measures passed by Congress. That’s because both parties have signaled support for an infrastructure program. Now, there are significant differences in terms of how large it should be, how you pay for it. And the role of the private sector in infrastructure spending. But the will is there, so I think that’s one area where markets might be under-pricing the risk of stimulus.”

“Even though the Republicans look like they did a little bit  better in the Senate, the broad strokes are fairly consistent with what the consensus is and based on that we’re seeing a mild positive reaction.”

“The modest reaction suggests that you are basically getting what the market expected and the attention of investors is going to quickly shift back to the fundamental factors in the market that have been in focus, as far as the global economy, the Federal Reserve, earnings growth. What this is telling you so far with a modest reaction in the market is that these other factors are overwhelmingly more important than these results today that are basically more or less what investors expected.”

“The split Congress scenario was the consensus expectation with the Republicans losing the House and the Republicans keeping the Senate. Although some say a split is good for financial markets, I disagree. The issue now becomes the Democrats paying more attention to the … impeachment of Judge (Brett) Kavanaugh and the impeachment of President Trump. You could also argue that the Democrats might call for a roll back of the tax cuts. If those things come into actual play, I think it would be a disaster for the equities markets. I am somewhat concerned that this could really play out. This could be a decisive negative for the equity markets as well as the bond market.”

“Given that the “base case” scenario is playing out—what looks like a perfectly average mid-term election in terms of the President’s party losing an average of 31 or so House seats—markets are unlikely to react much ahead due to this result.

“That being said, some parts of the U.S. equity market could begin to face headwinds over concerns about the tone coming from the Democratic House committees. For example, Representative Maxine Waters looks poised to chair the House Financial Services committee. She has long opposed deregulation efforts for financials. In our view, there is a very low chance of increased regulation under this Congress, but markets will begin to fret about ‘what dreams may come’ if Democrats win a follow-up victory in 2020. Even so, we continue to recommend an overweight to financials. Despite potential perceived headwinds from House committee hearings, there are bigger factors at play, and political considerations are unlikely to override the fundamentals.”