Tehran has dropped a key demand that stalled the talks for months, but it now has a new one. 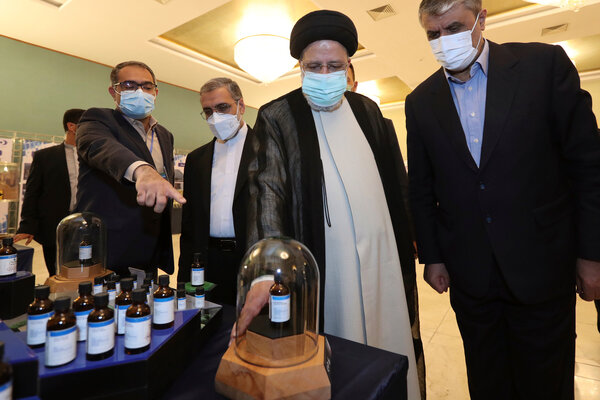 Seventeen months after the United States and Iran began negotiating a possible return to the 2015 Iran nuclear deal abandoned by President Donald J. Trump, the European Union has presented a “final” proposal for the two sides to consider before the talks collapse for good, Western officials said.

The negotiations have carried on through many pauses, crises and threatened conclusions, and it is far from certain that the latest proposal represents a final chapter. But U.S. and E.U. officials say their patience has worn paper thin, as Iran steadily expands its nuclear program.

“What can be negotiated has been negotiated, and it’s now in a final text,” the E.U. foreign policy chief, Josep Borrell Fontelles, said Monday on Twitter.

U.S. officials have long warned that time is running out to reach an agreement. A State Department spokesman, speaking on the condition of anonymity to discuss sensitive negotiations, said the United States was “ready to quickly conclude a deal” and that the E.U. proposal was “the only possible basis” for it.

U.S. officials are skeptical that Iran is prepared to roll back its program in exchange for relief from sanctions that have weakened its economy. But some analysts say the sides have inched closer than had been expected.

In a notable shift, Iran has retreated from two key demands. One is an insistence that the United States remove Iran’s Islamic Revolutionary Guards Corps from its official list of foreign terrorist organizations, according to people briefed on the negotiations and two Iranians familiar with the talks.

That demand became one of the final roadblocks to restoring the deal after President Biden refused to overturn the guards corps’ terrorist designation, issued in 2019 by Mr. Trump.

The other is an insistence that the Biden administration provide guarantees that a future president will not withdraw from the deal even if Iran upholds its commitments, as Mr. Trump did in 2018. The Iranians have come to accept that such a promise is not possible, according to the two Iranians.

“We are closer than we have been since the deal was all but done last May, before the talks suspended for the Iranian elections,” said Joseph Cirincione, a nuclear policy expert who consulted closely with the Obama administration during talks to strike the original nuclear deal. “Bottom line: It could happen.”

Such a breakthrough would provide Mr. Biden with a foreign policy achievement as he heads into midterm elections in the fall, though some European officials say the American president may be wary of political criticism over renewing an Obama-era agreement that Republicans almost uniformly denounce and that even some key Democrats opposed in its original form.

A critical stage. Despite recent threats and harsh words, the U.S. and Iran appear on the cusp of restoring the 2015 accord that limited Iran’s nuclear program, though important sticking points remain. Here’s a look at how we got here:

The 2015 deal. Iran and a group of six nations led by the U.S. reached a historic accord in 2015 to significantly limit Tehran’s nuclear ability for more than a decade in return for lifting sanctions. The agreement was President Barack Obama’s signature foreign policy achievement.

The U.S. abandons the deal. President Donald J. Trump pulled the U.S. out of the accord in 2018 and reimposed tough sanctions against Iran in hopes of forcing Tehran to renegotiate. Iran responded in part by enriching uranium significantly beyond the limits in the agreement.

A path back to an accord. President Biden vowed to bring the U.S. back into the deal, and talks in Vienna created a road map for that effort, though challenges have remained: Iran wants the U.S. to lift sanctions first, while the U.S. wants Iran to return to compliance first.

A new setback. On March 11, a European Union official said that talks on reviving the deal had paused following the invasion. Russia, a signatory to the accord, tried to use final approval of the deal as leverage to soften sanctions imposed because of the war.

Another try. In July, negotiators from the United States and Iran arrived in Vienna for one more attempt at restoring the deal. But before the negotiations began Iran, which has continued to advance its technical knowledge and stockpile of highly enriched uranium, announced that it now has the technical ability to produce a nuclear warhead.

Another factor is a fresh Iranian demand that the International Atomic Energy Agency, the U.N. nuclear watchdog, drop a three-year investigation into unexplained man-made uranium at various Iranian research sites, including some that Tehran refuses to let I.A.E.A. inspectors visit. Iran vehemently denied that it had military intentions for enriched uranium.

“This is their style: moving toward an agreement but at the moment of agreement saying, ‘There’s just one more thing,’” Mr. Cirincione said.

The agency identified traces of uranium particles based on information uncovered in 2018, when Israeli agents stole thousands of documents and CDs about Iran’s nuclear program from a Tehran warehouse.