AMBLER, Pa. — Kristyn LaBarge was on a walk when she found out, not from a smartphone alert or a call from a friend but from the loud banging of pots that something significant had happened — that Joseph R. Biden Jr. had made Donald J. Trump a one-term president.

From San Francisco to New York to Washington, D.C., big Democratic cities were erupting with spontaneous street parties of singing, honking and dancing on Saturday. But in Pennsylvania, Michigan and Wisconsin, which catapulted Mr. Trump to the presidency in 2016 and which Mr. Biden had just reclaimed, the celebrations seemed particularly sweet and personal. That was especially true in the leafy suburbs of Philadelphia, where huge Democratic margins had tipped the state that tipped the election.

“It was one of the most phenomenal moments of our lives,” said Ms. LaBarge, a 48-year-old mother of two boys and two girls. She rushed home to find that her son was already blasting the national anthem. In this most bitter of election’s wake, hearing Mr. Biden’s calming tone this week, she said, “was like this sweet music washing over me.”

“It just feels like,” she said, pausing and redirecting. “It’s such a relief.”

For Democrats, it has been an exhausting four years of Mr. Trump and tumult and tweets. Of travel bans and family separations. Of harsh words for Black leaders in the United States and warm ones for autocrats abroad. Of not one, not two, but three Supreme Court appointments. Of impeachment and acquittal.

And now, release and restoration.

In a year defined by the pandemic and its wrenching losses, many Democrats feel they just won something back: integrity in American democracy, pride in their country’s next leader and, more parochially, the “blue wall” of political power that the party long enjoyed in these three states. As defenders of free and fair elections urged the counting of every vote, voters in these three states knew it would be their ballots that carried the most weight.

When the news broke, Michael Jeske stepped into his yard in suburban Milwaukee and blasted a conch shell. Bjorn Hansen, a Republican in Kent County, Mich., who voted for Mr. Biden, received a text from Europe and pumped his fist. And Derrick McConnell of Detroit jumped up and shouted, “Thank you, Jesus!”

They cried. They danced. They smiled through masks. Many hugged.

“Covid be damned,” said Alison Duncan, who lives in a suburb of Pittsburgh. She was wearing torn pajamas when her neighbor came by in sweaty gym clothes. They embraced anyway. “It was beautiful,” she said. 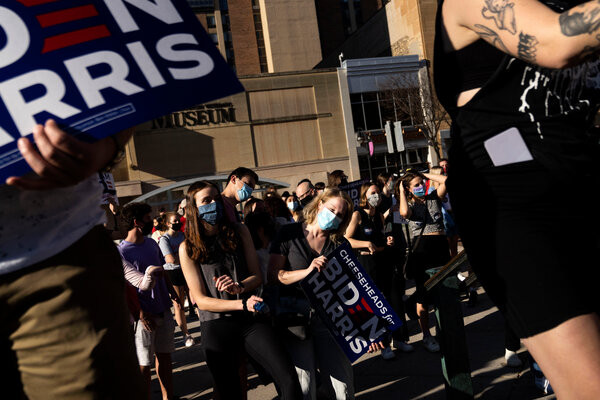 Some people simply felt it was easier to breathe. The Trump era began for many Democrats with a sense of defeat and dread. It got worse: Charlottesville, the images of children in cages, the attacks on female members of Congress and women in power. And then it was about surviving the worst pandemic in a century, which triggered anxiety among Democrats that Mr. Trump was not taking the health risks seriously enough.

On Saturday, a new calm set in.

“I don’t think I need the Wellbutrin anymore — no more antidepressant for me,” said Ruth Briggs, 65, who was skipping down Arch Street in Philadelphia with her friend Stephanie Marsh, 40. “Four years of depression, just four years. It’s been horrible. And it’s lifted.”

In his first address to the nation as president-elect, Mr. Biden admitted his surprise at the spontaneous celebrations in the streets, which he called “an outpouring of joy, of hope, of renewed faith that tomorrow will bring a better day.”

An unseasonably warm day across much of the industrial Midwest and Pennsylvania, with bright sun and temperatures climbing into the 70s, only added to the sense of euphoria. People poured into the streets of downtown Philadelphia, the birthplace of American democracy and a city not known to not take credit (“Gritty Did It” read a homemade sign paying homage to the city’s, well, unique hockey mascot). They celebrated reclaiming a system of government that they believed had been fundamentally at risk.

“It felt like every half of every ’80s movie where the bullies are just winning and winning and winning, and you just don’t know if the world was the way you thought it was when you were a kid,” said Tom O’Connell, who, with his wife and three children, was among those downtown. “But it’s the second half now.”

If Mr. Biden were to carry the last two uncalled states where he is now leading, Georgia and Arizona, he would win exactly 306 Electoral College votes — the same number that Mr. Trump carried in 2016, which the president has long characterized as a “landslide.”

Still, the 2020 election results tell a more complicated story for Democrats than a simplified Hollywood script. Mr. Trump lost, but Republicans gained seats in the House and kept control of the Senate for now with runoff elections looming for two Senate seats in Georgia. And Democratic hopes to make gains in statehouses were mostly dashed. The margins were razor-thin even pre-election, though some polls had Democrats dreaming (Texas! Ohio! Iowa!) of an emphatic repudiation of Trumpism that did not arrive.

“Dance to your demise,” warned a sign held at a gathering of Trump supporters in Harrisburg, Pa. Similar pro-Trump demonstrators counterprogrammed Democratic celebrations in the capitals of Lansing, Mich., and Madison, Wis., a reminder of how divided the nation remains.

In Detroit, Hasan Beydoun, the owner of the Rafic’s On the Go food truck, said he was happy to contribute in a small way to the party with free cartons of chicken tenders, falafel and french fries, handed out to a hungry crowd of several hundred people.

Among them was Bruce Fealk, 67, who, at protests for the past four years, has been wearing a prison jumpsuit topped by a gigantic papier-mâche head made to resemble a snarling Donald Trump. Now he is planning a retirement ceremony for the 10-pound prop.

“On Jan. 20, no matter how cold it is, in the middle of a snowstorm, we’re going to have some kind of celebration,” said Mr. Fealk, who lives in the Detroit suburb of Rochester Hills. “And I’d like to burn it, in a bonfire would be good — maybe with some marshmallows.”

If defeat is an orphan, then Mr. Biden’s victory has many parents. Black voters in cities. College towns that turned out. Progressive enclaves that voted en masse. White suburban women who rejected Mr. Trump. White blue-collar workers who voted, even just ever so slightly, in greater numbers for Mr. Biden than they did for Hillary Clinton.

In Pennsylvania, the four suburban counties that ring Philadelphia netted Mr. Biden about 94,000 more votes than Mr. Trump, compared with Mr. Trump’s numbers against Hillary Clinton four years ago — enough to offset Mr. Trump’s entire margin of victory in 2016 and to account for his full deficit when the race was called in 2020.

“There is enough of us here to be the country others in the world believed we were before,” Julie Strauss, 65, who lives in Montgomery County, part of that suburban ring, said as she shopped at the local cooperative. She was heartened that the leaders of France and Canada had quickly weighed in to congratulate Mr. Biden.

Of the Trump era, she reflected, “It’s disheartening to have discovered in this process it wasn’t the America I thought it was.”

In a mostly Black area of North Philadelphia, Trevor Lewis, a 51-year-old construction contractor, voted for the first time this year. He wasn’t happy with Mr. Biden because of his past support for laws that imposed harsh sentences for minor crimes. But he came out to vote against Mr. Trump.

“When you’re Black, you know when somebody’s being racist,” he said. “He’s inciting groups like the Proud Boys and QAnon. Trump is a big kid with an ant farm and a magnifying glass, and we’re the ants.”

Balanced in the vote against the president, a uniquely energizing force, were voters who saw in Mr. Biden a sense of decency that they felt had been abandoned in White House.

“Thank God, America will be for the good of the people once again,’’ said Linda Gorski-Slear, 69, a retired dental hygienist in Washburn County, Wis. She said having a leader who would address the pandemic was urgent. “Biden cares about the people, not just going to the golf course on the weekend,’’ she said.

As it happened, when the race was called on Saturday, Mr. Trump was at his golf club in Northern Virginia, exactly the kind of suburban area his embracing of white grievance politics and cultural division has turned deeper blue. “Good riddance,” read one sign his motorcade passed.

Back in Ambler, Gina Donato, 46, said she had been crying a lot — first when Pennsylvania flipped and again when the presidential race was called. She had cried when Mr. Trump won, too, and it all felt just like things had come full circle.

“It was such a release,” she said. “Oh my God, this is the first time I’ve had hope in four years.”