WASHINGTON — Jared Kushner, the president’s son-in-law, was confident in his ability as a good-faith negotiator who could find a compromise to end the government shutdown.

His pitch to Democratic lawmakers was simple: He told them he was the person who could “land this plane.”

Buoyed by his success in helping pass a criminal justice bill, Mr. Kushner, a senior White House adviser, agreed to take the lead when the president asked him to find a way to end the monthlong stalemate. He hoped his experience winning over Democrats skeptical of the Trump administration during negotiations for that measure would produce a similarly successful conclusion.

But negotiating a broad immigration deal that would satisfy a president committed to a border wall as well as Democrats who have cast it as immoral proved to be more like Mr. Kushner’s elusive goal of solving Middle East peace than passing a criminal justice overhaul that already had bipartisan support.

For one, Mr. Kushner inaccurately believed that moderate rank-and-file Democrats were open to a compromise and had no issue funding a wall as part of a broader deal.

“If Jared Kushner thinks there is any daylight between House Democratic leadership and rank-and-file members on this issue, then the extent that he lands this plane it will land in the Alamo,” said Representative Hakeem Jeffries, Democrat of New York.

And Democratic leaders like Senator Chuck Schumer, party officials said, did not believe that Mr. Kushner had the power to circumvent Stephen Miller, a senior policy adviser to the president. In meetings, they also noticed, Mr. Kushner appeared to prop up Mr. Miller as an expert on immigration, noting that Mr. Miller’s reputation as a hard-liner was out of sync with his reasonable nature.

On Friday, President Trump did what Mr. Kushner had privately insisted was not an option on the table: He folded. 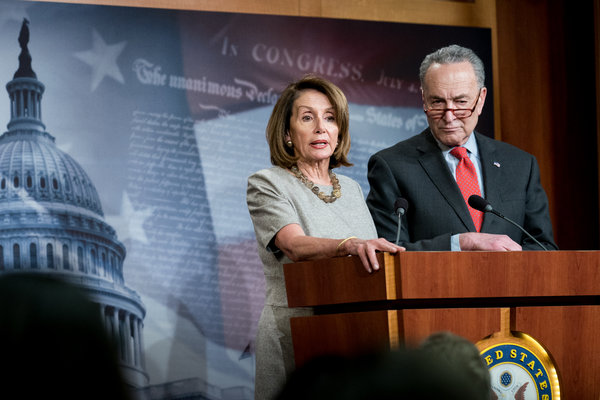 Standing in the Rose Garden, Mr. Trump announced he was ending the standoff, during which he had failed to convince Democrats to fund a $5.7 billion border wall, and was reopening the federal government for three weeks.

It was a stunning setback for the president and for Mr. Kushner, who had told colleagues that public opinion would move to their side and that Speaker Nancy Pelosi would emerge as the one who looked unreasonable and intransigent.

Mr. Kushner had advised the president against declaring a national emergency, which would enable him to get funding for his wall without approval from Congress. Instead, he ultimately pushed Mr. Trump toward the announcement he made on Friday, supporting it as a way to buy more time to reach a deal.

Mr. Trump, White House aides said, has been frustrated at everyone around him for not delivering a deal he can accept. And he has become wary of his son-in-law’s advice on this issue, the aides said.

This account is based on interviews with more than a dozen congressional officials, White House aides and people involved in the immigration debate.

On Capitol Hill, aides said, Mr. Kushner had positioned himself as the person who could sell the president on a compromise, casting himself as a facilitator who did not lobby for details of any proposal but simply wanted to find a solution that both sides could claim as a victory.

Mr. Kushner has told Mr. Trump that he should spend the next three weeks trying to achieve a broader immigration package. That challenge has eluded both parties for years, but Mr. Kushner has suggested to colleagues that it is worth trying for, according to West Wing aides.

The president appears to have internalized the advice. “21 days goes very quickly,” Mr. Trump wrote on Twitter on Saturday morning. “Negotiations with Democrats will start immediately. Will not be easy to make a deal, both parties very dug in. The case for National Security has been greatly enhanced by what has been happening at the Border & through dialogue. We will build the Wall!”

But Democrats said they do not believe that Mr. Kushner will have better luck drafting a larger deal in the next few weeks. “Unless he’s able to convince his father-in-law to abandon his obsession with building a medieval border wall, then he’s not going to be successful in finding a bipartisan agreement,” Mr. Jeffries said.

Sarah Huckabee Sanders, the White House press secretary, however, noted that Mr. Kushner was still seen internally as one of the administration’s most successful negotiators, pointing to his involvement with the criminal justice bill as well as the new North American trade deal. “Jared is a key player in the administration and will continue helping the president accomplish his top priorities,” she said in an email.

But for now, Mr. Kushner appears to have few allies, occupying what people close to him describe as a no-win position.

Mr. Kushner finds himself with little sway over Democrats, who consider the substantial changes that the White House keeps proposing for asylum seekers to be poison pills. And conservatives are not convinced Mr. Kushner is the right person to negotiate a deal. They recognize he has Mr. Trump’s ear, but worry he does not understand the fault lines of the debate or what proposals will anger Mr. Trump’s base. One proposal that was reviewed, which would give green cards to 700,000 undocumented young immigrants, enraged conservatives.

Within the White House, several aides said, Mr. Kushner is not interested in opinions that vary from his, and tends to view people who disagree with him as problems, closing them out of discussions. People close to Mr. Kushner, however, speaking on the condition of anonymity, have described him as working well with West Wing colleagues, particularly the legislative affairs director, Shahira Knight, a veteran of Capitol Hill.

But even Mr. Kushner’s allies concede that when it comes to immigration, he has not grasped the emotional nature of the fight the way he did when he tackled the criminal justice overhaul, an issue that was personal because of his father’s own incarceration.

Mr. Kushner, allies said, sees the $5.7 billion request for border wall money as reasonable, and has compared it to one month of troop deployments in Afghanistan. He views Ms. Pelosi as “trophy hunting,” or trying to take down the president politically with the shutdown.

Allies of Mr. Kushner say that not all of his discussions with Democrats have been publicized, and that he has gained trust partly because he keeps his conversations confidential. But on Capitol Hill, many Democrats said discussions on immigration have been scarce.

Senator Dick Durbin, Democrat of Illinois, was given no notice about Mr. Trump’s announcement last weekend in which he offered temporary protections for young undocumented immigrants in exchange for wall money, according to a congressional aide. Senator Joe Manchin III, Democrat of West Virginia, heard from Mr. Kushner only once, when he phoned before the president’s prime-time address from the Oval Office to warn him that the moment would move public opinion to the president’s side. Mr. Jeffries, who worked closely with Mr. Kushner on criminal justice reform, had no conversations about forging a bipartisan immigration bill.

Some Democrats, however, gave Mr. Kushner credit for at least trying to keep a dialogue going, even if it did not result in a compromise.

“We disagreed on the issue, but talking is essential in a divided government, especially if we want to solve any problems,” said Representative Josh Gottheimer, Democrat of New Jersey.