NASHUA, N.H. — He name-checked Senate leaders from the 1970s, trumpeted policy accomplishments from the 1980s and offered detailed analysis of a legislative battle from the 1990s.

He gave sometimes meandering answers to voters and reporters, occasionally cutting himself off mid-digression.

He clasped hands and gripped arms and issued hearty refrains of one of his signature phrases, “God love ya.”

On his first trip to New Hampshire as a 2020 contender, former Vice President Joseph R. Biden Jr. made clear that he is relying on a set of retail politicking skills and reference points cultivated in a different era to forge the personal connections that voters here famously demand of presidential candidates.

It is a warm, unhurried, feel-your-pain style that frequently delighted — and in some cases emotionally stirred — voters who encountered Mr. Biden on his swing on Monday and Tuesday through this state, which holds the first primary in the presidential nominating contest.

But it is also an approach that carries risk: The dated references and circuitous speaking manner were reminders of Mr. Biden’s lengthy, sometimes controversial policy record, and of his age — 76. This is not a man who came up in the Twitter moment that rewards quick, punchy rejoinders, a skill at which some of Mr. Biden’s rivals have excelled.

[Sign up for our politics newsletter and join our conversation about the 2020 presidential race.]

Mr. Biden spent part of a cold, wet Tuesday afternoon in the woodsy backyard of former State Senator Bette Lasky here in Nashua. A question-and-answer session with voters led to stories about former colleagues in the United States Senate who have long been out of office — Mr. Biden ticked through names like Mike Mansfield, Jesse Helms, Edward M. Kennedy, Bob Dole — as he called for more decency in politics. And in response to one question, Mr. Biden relitigated the 1994 crime bill that many have since associated with accelerating mass incarceration, a major source of progressive opposition to his candidacy. 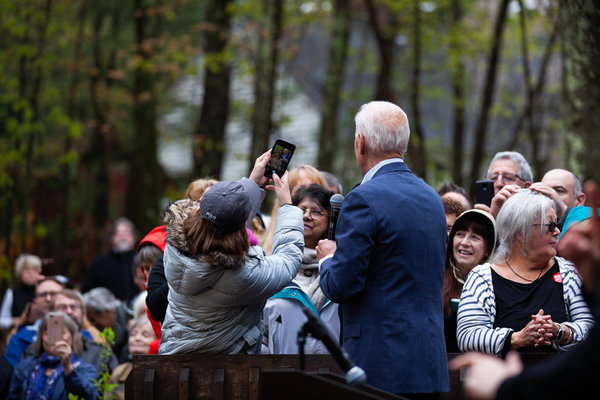 “This idea that the crime bill generated mass incarceration, it did not generate mass incarceration,” he insisted as he also detailed political dynamics from the time, such as “the Black Caucus supported the bill” and “President Clinton wanted ‘three strikes and you’re out,’” a mandatory sentencing provision that Mr. Biden said he opposed.

Then there was the matter of climate change. Mr. Biden repeatedly cited his initial legislative push on that issue from more than three decades ago. His goal was to highlight his long record of championing the environment, a critical issue to Democratic voters at a moment when Mr. Biden finds himself under fire from the left over how bold he is willing to be on climate. But the frequent references to remarks he made in 1987 — Mayor Pete Buttigieg of South Bend, Ind., a presidential opponent, was 5 years old that year — offered reminders of the stark generational divide in the sprawling Democratic field.

“I like him very much; certainly he has the most experience. I worry about his age,” said Susan Larkin, 64, as she waited to get into a pizza restaurant in the coastal town of Hampton on Monday, where Mr. Biden held his first event. Ms. Larkin said she was also interested in Mr. Buttigieg: “I saw what the presidency did to a young man like Obama. I would say that’s my biggest reservation.”

Mr. Biden has repeatedly said that it is fair to question his age, and told the local outlet WMUR that he was planning to release his medical records before the general election.

“But the main thing I can say is just watch me and determine if I have the energy, and determine whether all the things I’ve gone through in my life in terms of being a senator and the vice president gave me some insight and wisdom that maybe comes with age,” he said in that interview.

Many voters at his events, which tended to draw older crowds, were willing to use those measures.

[Check out our tracker of the 2020 Democratic candidate field.]

“It was a concern maybe in the past, but now I’ve seen him, I see how energetic he is,” said Chris Norregaard, 64, who had come to the Nashua event from over the border in Massachusetts, a state set to vote on Super Tuesday, three weeks after the New Hampshire primary on Feb. 11, 2020.

“He’s spry!” added Sarah Barnes, 74, speaking at the Nashua house party, which according to the campaign drew 500 people. “See him jumping up and down. He’s very sharp.”

On his swing through New Hampshire, Mr. Biden did some of his most extensive retail politicking of his nascent campaign. He took multiple rounds of voter questions. He stopped at an artisanal cafe in Concord and talked with patrons — who appeared outnumbered by journalists — before ordering a parfait and a blueberry muffin. And he spent substantial time on both days working the crowds after other events, lingering for nearly an hour in Nashua. There and in Manchester he did so from behind a rope line, but in Hampton he moved through a throng of people in the restaurant and the bar.

He signed books and hats, administered selfies, ribbed young people about “getting old” and sometimes offered a word of comfort for those who, like Mr. Biden, had experienced tragedy. He lost his first wife and a daughter in a car crash in 1972, and his son Beau died of cancer in 2015.

“Meghan McCain on ‘The View’ says, ‘Every time I see you, I cry.’ That’s how I felt,” said Laura Landerman-Garber, a clinical psychologist from Hollis, N.H., who connected with Mr. Biden after his speech at Manchester Community College, where she talked with him about the shooting last year at the Tree of Life synagogue in Pittsburgh, a congregation she previously attended, as well as about her work with military families.

As Ms. Landerman-Garber recalled it, Mr. Biden’s eyes welled up and he gave her a hug — “I asked,” she noted, after Mr. Biden has faced criticism from some women for unwanted touching. She also praised him for taking time to listen, saying he was “not in a hurry.”

Mr. Biden is leading in state and national polls, and with that status and his vice-presidential credentials comes a crush of journalists and large crowds seeking photos and handshakes. In Nashua, Mr. Biden stayed until the last photo-seekers got their pictures. He then talked to reporters, brushing off a staff member with a “Yeah, I know,” when she said it was time to go.

But the crowded events can also hinder accessibility, lamented State Representative Nancy Murphy in Nashua — a reminder of the high expectations New Hampshire voters and activists have for interacting with candidates.

“We have such the opportunity to see our candidates and actually speak with them, and not as much luck with him because it’s been so crowded,” she said. “But other candidates, you see them three times, you really have a sense of who they are.” She also praised Mr. Biden for engaging “with the whole crowd.”

Asked if the big crowds could actually prove to be a problem for Mr. Biden, Ms. Murphy said: “I wish he were more accessible, but I get it. I realize there are many people, his time is certainly impacted by all of the requirements of where he has to be. So we get it, but certainly we would like to have more access, but we have more access than so many people in other states.”

Mr. Biden, for his part, pledged to return: “I plan on doing everything I can to earn the respect and support of the people in New Hampshire,” he said at his opening event. “I’m going to be here a lot.”